Around three years ago, John Zeppetelli (Director and Chief Curator of the MACM, Co – Curator of the exhibit) and Victor Shiffman (Co – Curator of the exhibit) began entertaining the idea of creating an exhibit dedicated to the man, the artist, the icon, and the proud Montrealer, Leonard Cohen. At the idea’s conception, the exhibit was intended to celebrate Cohen and his work, and while the end product is still entrenched in a deep and lively admiration for the artist, his passing in 2016 colours the exhibit with a respectful reverence that can only be given to a career that has now become a legacy.

Leonard Cohen: A Crack in Everything / Une brèche en toute chose is a monumental achievement of artistic synthesis, made up of 20 pieces and installations, produced by 40 artists representing 10 countries. Far from a sycophantic exercise, the exhibit engages with Cohen’s legacy through a depth and honesty that can only be achieved through the multidisciplinary approach it masters: an homage through music, dance, film, poetry, photography, virtual reality, and more. The exhibit embodies the dichotomies that run through Cohen’s songs and poetry; it is austere yet immersive, seemingly detached and yet heartbreakingly personal. As a writer, I struggle with the task of describing this exhibit in a way that does it justice and yet equally respects that it is a mystery only to be solved by attending the experience oneself.

During the exhibit’s press launch on November 8, The Bull and Bear was granted the opportunity to interview some of the artists that contributed to the exhibit. The two following interviews offer a view of the exhibit through their juxtaposition: one centres on the work, the other on the man; one isolates the guest from their agency, asking them to lie passive and experience Cohen’s work through sounds and images that surround them, while the other imbues the guest with a sense of exploration, asking them to walk through a replica of a room in Cohen’s home and extrapolate meaning from the mundane and everyday. This analysis given through contrast is not perfect of course, just as this article is not a perfect offering of explanation to an exhibit that’s grandeur defies description. There are cracks in this article, just as there are in everything. How else would the light get in? 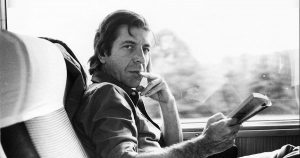 Courtesy of the MACM

Ari Folman is an Israeli director and screenwriter, best known to most as the creator and visionary of his 2008 film, Waltz with Bashir, winner of over 18 awards including the Directors Guild of America for Outstanding Directorial Achievement in Documentary, a Golden Globe for best foreign language film, and a nomination for an American Academy Award for Best Foreign Language Film. Folman’s connection to Cohen’s work originates in his memory of listening to his older sister play Cohen’s record Songs of Leonard Cohen on repeat while barricaded in her room to battle the depression and loss found in heartbreak. In Folman’s mind, Cohen is forever associated with “an all – embracing, protective, sweet melancholy that gives you a feeling of home and of ‘leave me alone for a while, I need some time to myself.’” His contribution to the exhibit, Depression Chamber (2017), finds harmony between the depression and peace found in isolation. It places the guest alone in a room where the lyrics of Cohen’s Famous Blue Raincoat animate and morph to enshroud their body. The ensuing experience is breathtaking, and stays with the guest long after they leave the chamber.

Bull & Bear (B&B): Your piece centres on the isolation and depression found in Leonard Cohen’s work. Why do you think that representing these aspects of his work through an immersive multimedia experience is so important? What is so important about how the sounds, images, and isolation interact with each other?

Ari Folman (AF): I just think that he was such an incredible artist, completely different from anything you know. He was a truly great poet, one that could shoot an arrow into everybody’s heart. Love, isolation, loneliness, family life, everything was in him very deeply. He was resurrected so many times by changing himself, so by scale he was a huge artist. This kind of work, specifically, touches so many fields of art forms: visual, theatre, sculpting, and film of course, everything is there. So if not for him, who else?

B&B: Isolation is so seldom celebrated, why do you think Cohen was so successful at it?

AF: He gives you a uniquely good feeling of melancholy and isolation. He gives you this premium feeling of not feeling guilty for feeling depressed. It’s an upper not a downer, and this is very unique. I wonder how many people during the last 50 years have been listening to him, feeling so sorry for themselves and getting addicted to that feeling, and then realize through him they could recover. Excluding the option of being sick and mentally ill with depression; sometimes it can be good to just feel it. To let go, to sink a little bit, just in order to rise up again. 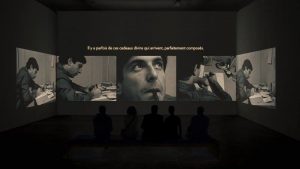 Courtesy of the MACM

Carlos and Jason Sanchez are a team of brothers and artists living and working in Montreal. Their piece I Think I Will Follow You Very Soon (2017) allows the viewer to walk into an almost exact replication of a simple studio room in Cohen’s Los Angeles home. The room is minimally decorated and yet filled to the brim with insignificant treasures that speak to a presence that cannot yet be seen: smoldered cigarettes, an empty glass, and a partly opened package of cough drops on a desk just below the room’s window. Peering out this window, the next component of the installation becomes apparent – using holographic spatial technology, the Sanchez Brothers have created a view of Cohen sitting on his veranda, looking out into the dimming light. With his back to the window and the viewer, Cohen appears to be intimately present, and yet peacefully detached, immersed in a view and reverie that the guest can share in, if only for a brief window in time.

B&B: Obviously this exhibit tackles a personal relationship and an immersive experience with Leonard Cohen and his work in very different ways. Why did you choose “the home” as the main avenue to exhibit and honor him?

Carlos Sanchez (CS): For us, our main thing wasn’t immersing yourself in his work the way other people have chosen to do through song, writing and interviews. We were more interested in Cohen as a man, as a human, and less as the artist. So we did a lot of research, trying to get to him behind the mask of the performer. We found this one image that was taken by Dominique Issermann which inspired the project. It’s just him, taken from inside his house, on his veranda looking out at the view from his L.A. home. We were really touched by that, since it was taken a few months before he died. It was just this intimate image of Leonard, and we decided to sort of recreate that. We just wanted to give the viewers a moment to be with Leonard.

B&B: The installation is very detail oriented. Certain details are very much a part of his image, like the cigarettes, the hat, but some others were slightly less expected, like the opened package of cough drops on his desk. Was there any debate over what details to put into this piece, and which ones to omit?

CS: All the details were things that we actually found from images taken in his home. So the umbrella, the same key board he actually had, the shelving unit, the Malboro Lights, everything is based on research that we did. The Star of David mirror in the hallway, he also had a mirror like that.

B&B: Some objects nearly have an ingrained symbolism to them, the Star of David mirror being a very good example, whereas others seem nearly banal. Are these separate camps of objects supposed to play in tandem with each other? Why use the banal objects?

CS: Because that’s everyday life. What we learned from researching Leonard is that he was a very humble man and super un-extravagant. He lived in a very modest house in L.A. with his daughter, who just lived a floor below.  That is what really struck us, how a man of this grandeur can be so minimal, and so unaffected by money and materialism. What I like most about Leonard Cohen is the type of man he was. If you wipe away who he was as a performer and as a huge artist, he was just a very normal man. He just drove a shitty Honda Civic, *laughing* and I really like that. So everything that we put in the installation was stuff that we found. There is artwork from one of his best friends Mortin Rosengarten, who we met and lent us artwork to have in the installation. We try to make everything as realistic as possible. The view you see when you look out the window is the same view he had on his L.A. veranda, and we sent a sound designer out to L.A. so the sounds you hear are the sounds that he likely would have heard as well. We wanted to stay as true as possible to the man he was.

For ticket prices and hours of operation, please visit their website.

By Samantha Larocque, Rochelin Dalangin, and Viola Wang Guest contributors As university students, we’ve all had the experience of struggling…