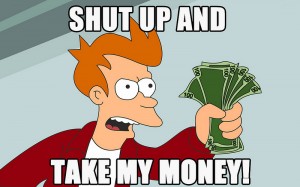 Ever wonder how YouTube, Google, and Facebook went from popular websites to superpowers each valued at tens of billions of dollars? In the case of YouTube, Chris Haroun had a lot to say about their success, and his firm played an influential part of YouTube’s track to going public. Haroun is a partner at Artis Ventures, where he focuses mostly on software and technology start-ups. Last month, McGill students we were fortunate enough to to have this celebrated alum speak to them about his wealth of experience. Haroun offered unique insights derived from his expertise in Information Systems and Finance. Of the many points raised, a few lessons stood out, surprising and enlightening students eager to learn from someone with such a breadth of experience.

Haroun graduated from McGill with a Bachelor of Commerce, majoring in Information Systems. He then worked at Accenture before attending Columbia University for a Masters in Finance. His career flourished further as he spent four years at Goldman Sachs, managing a portfolio worth over $1 billion. Now a partner at Artis Ventures (AV), he spoke confidently and comfortably about his past. Haroun was lively throughout the presentation and was more than happy to answer questions sent his way by a highly engaged audience of students eager to participate.

Venture capitalists are among the first to invest in new firms. They often have to make decisions based on qualitative factors rather than focusing on quantitative financial data. AV’s selection process begins with a mass analysis of over 405 companies. This list is slowly narrowed down, ending with investment in one or two firms per quarter. This is especially fascinating when it is considered that of those firms in which AV invests, few reach significant success quickly. In fact in the AV fund that Haroun presented, there were less than a dozen companies, and only a few needed to be successful for the fund to have strong returns. Seeing the difference in the treatment of technology start-ups versus other industry start-ups was a genuine treat for the business enthusiast. We would generally think that the success of a venture capital firm is dependent on picking mostly successful investments; however, Mr. Haroun explained the opposite.

On the profitability of firms, he believed that startups should wait longer before going public. Historically, firms have been known to hastily push for an initial public offering. However, we have discovered that some of those firms, Netflix among those, found going public revealed their competitive advantage too early to the market and subsequently to their competitors. Waiting longer before the IPO allows firms to mature further in their market, making replication of their success increasingly difficult as their core competencies are given time to mature. The notion that spending more time as a private company often yields more fruitful returns was a relatively novel, especially given the fast-cycle nature of the technology industry.

Throughout the presentation there was a reiteration of the importance of strong management in the companies that AV considered for investment. We conventionally assume that the most important indicators of a start-up’s future success would be the idea, business model, and current sales or financial results. Haroun, however, was quick to point out that the management team should be the key decision making criterion – looking specifically at their track records, past experience together, and ability to manage projects. Initially his commentary was surprising; however, as he covered examples of recent successful start-ups, his case became more and more convincing. Haroun cited YouTube, mentioning that the management team had previously worked together at PayPal and that the reputation they had built was a key driver in AV’s decision to invest in them; the same was true for Bracket Computing.

The most fascinating part of Haroun’s presentation was his detailed analysis of Bracket Computing, specifically why AV invested in them, and why he was confident that Bracket has a bright future. Haroun explained that Bracket solves the security problem with respect to Cloud storage. The analysis was especially stimulating by virtue of its relevance to our course material: virtual versus physical storage, as well as the benefits and disadvantages of each. Discussing Bracket taught us the downfalls of current cloud technology, and about the government regulations needed for it to be considered secure. Moreover, we were genuinely fortunate to be given the rare opportunity to witness how a venture capitalist selects and works with a new firm.

The presentation provided a unique window into the venture capital industry in Silicon Valley. Haroun offered a fresh and new perspective, revealing insights into an unfamiliar yet exciting career path emerging from the technology and software boom.

If there were a map to artsy, Instagram-worthy spots in Montreal, surely the iconic Mile End neighbourhood would be a…