The demonstration comes in the wake of the March 23rd, 2016 meeting of the McGill Board of Governors. During this meeting, the Board approved a report by the Committee to Advise on Matters of Social Responsibility (CAMSR), which denied Divest McGill‘s petition for the University to divest from the fossil fuel industry. The report judged that fossil fuel companies did not have “grave injurious impact.” Instead, CAMSR concluded that “the beneficial impact of fossil fuel companies offsets or outweighs injurious impact at this time.” 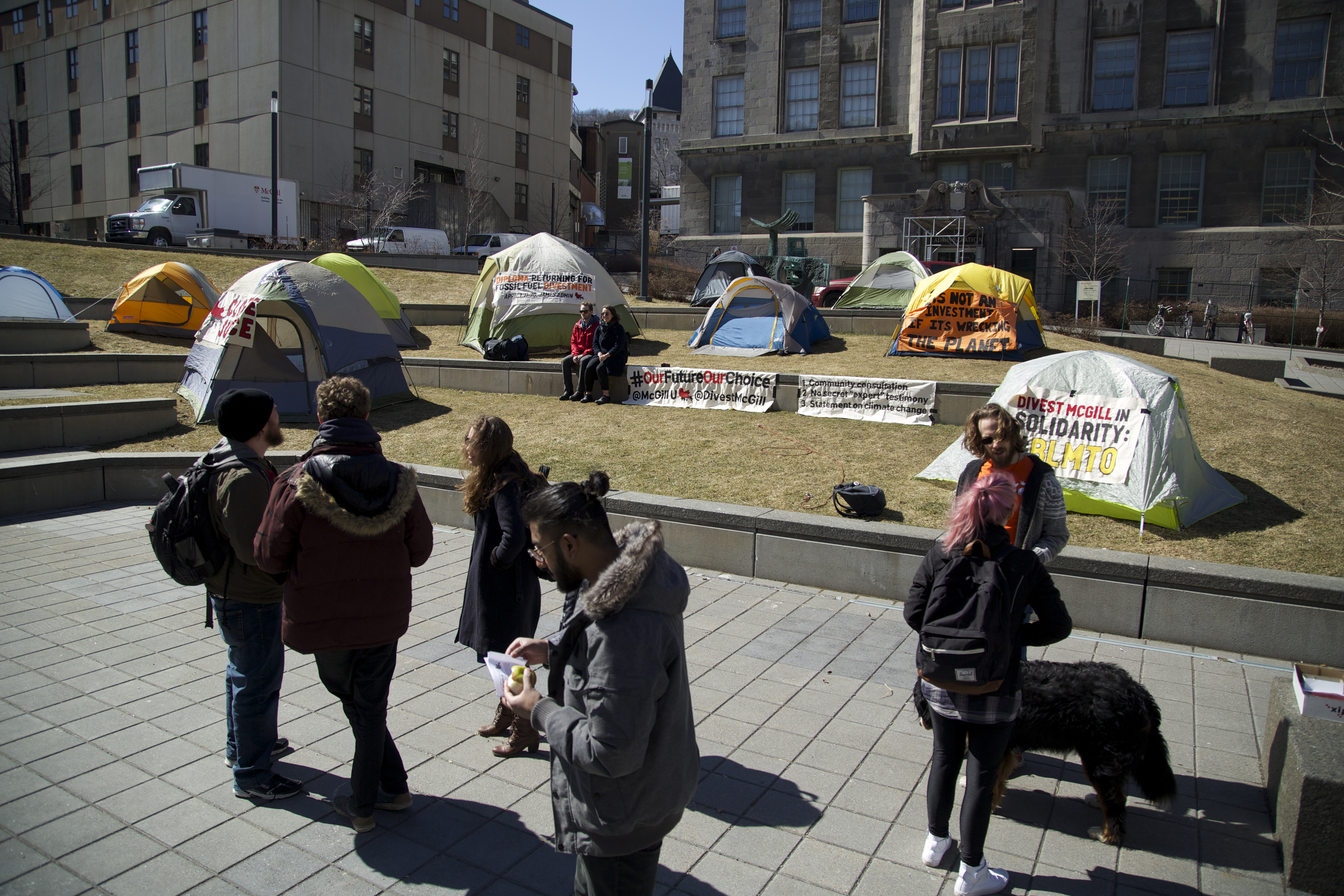 (2) That the experts consulted by the Committee in drafting the aforementioned report are made public;

Along with the sit-ins in James Administration, members of Divest have also pitched a tent city outside the building.

(Update) Wednesday March 30th 7:07 PM
“You are an inspiration and you are our very best hope” – Professor Darin Barney

March 30th, 2016 marks the second day of Divest McGill’s tent-city protest in front of the James Administration building. Divest is calling for transparency through public hearings of the CAMSR report, the public disclosure of sources used in consultation of their investigation, and for Principal Fortier to acknowledge social injury as being a harmful and critical component of the fossil fuel industry. At 1 PM Divest held a rally in the community square, welcoming notable speakers from McGill Faculty and Librarians for Divestment. It represents over 150 McGill faculty members. Professor Darin Barney from the Art History and Communications Department addressed the crowd as a member of this group, asking:

According to Professor Barney, and other proponents of for divesting from fossil fuels, McGill is effectively acting against its community by lack of transparency and refusal for dialogue. Antonina Scheer, a Divest McGill Organizer and U2 student in Earth Sciences and Economics, also responded to McGill’s decision against divestment, arguing:

“It’s a poorly researched brief and report and poorly argued and we stand very much against it along with many alumni, professors, and students.”

With the tent-in protest, Divest hopes that silenced voices directly affected by climate change will be heard by the University Administration. A meeting with Principal Fortier is scheduled for Thursday, and Scheer hopes that Divest’s demands will be met. Scheer also disclosed that some headway is being made on the inside of the James Administration building and that Divest will keep up the pressure; she made Divest’s position clear: “We’re not going anywhere.”

A group of Divest activists are camped out in Principal Fortier’s office which, according to Scheer, is the front line of the battle.

At 2pm on March 31st, McGill University Principal Suzanne Fortier met with Divest McGill members in an open forum-style meeting to discuss the CAMSR report at the heart of the contention. The report, which recently was passed by the Board of Governors, rejected Divest McGill’s petition calling on the University to divest from the fossil fuel industry. The report argued that fossil fuels do not pose enough of a ‘grave social injury’.

During the meeting, a Divest spokesperson addressed Principal Fortier, accusing the fossil fuel industry of “not playing by the rules.” Principal Fortier responded: “allegations are allegations, until proven.” Fortier’s response, for many in the Divest camp, seemed dismissive of serious social injury cases.

During the meeting, Principal Fortier also agreed to be present at a community meeting (time and place to be determined). Although Fortier stated that she would not discuss divestment from fossil fuel industries at the meeting, she reiterated her stance that others are welcome to engage in the conversation. Fortier also indicated the possibility of CAMSR reviewing the report – but it may also stay untouched.

Antonina Scheer, a Divest organizer, reflected that “we are seeing support for our sit-in grow: today, in solidarity with Divest McGill, members of AMIR didn’t attend their meeting with Principal Fortier. She is receiving pressure from many fronts on this issue. Hopefully, it’s sinking in that she made a decision against the McGill community.”

At 2:30 PM Divest held a rally in support of Sexual Assault victims in solidarity with Sexual Assault Awareness Week. At 7:00 PM later tonight, Divest will be holding Rock Out for the Environment, an outdoor concert held in the Community Square outside of the James Administration building.

April fools? More like Fossil Fools! On the fourth day of the tent-in, on April 1st, 2016, there is a growing energy on the campsite. Today, over 20 McGill Alumni returned their diplomas to publicly condemn the institution for investing in the fossil fuel industry. Divest called for all allies for Climate Justice to congregate at 11:30 AM in the Community Square to partake in the ceremony. At this time, the ten activists who have staged a week-long sit-in inside of Principal Fortier’s office joined the community once again and partake in the ceremony. Julia Epstein, a sit-in activist in Principal Fortier’s office stated to the Bull and Bear that, “If the administration does not want to listen to the clear science or the overwhelming support from the community, their professors, or even the students who have been sitting in peacefully in Fortier’s office and camping out in community square, hopefully they will listen to their alumni. The board has never really engaged with the community on this issue, and we are extremely frustrated that the administration is hiding behind their broken processes as a legitimate excuse for rejecting divestment. This ceremony is proof that McGill alumni are embarrassed by this decision, and are ashamed of McGill for their hypocrisy and lack of accountability.”

If you are having trouble viewing our Twitter feed, make sure your ad blocker is turned off. You can also view our live blog by clicking on the link above.

When one thinks of Montreal nightlife, one usually thinks of drinking. Quebec’s low drinking age teamed with endless bars on…