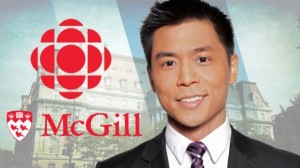 On Tuesday evening, Montreal’s four main mayoral hopefuls debated corruption, infrastructure and the Charter of Values. Richard Bergeron, Denis Coderre, Marcel Côté, and Mélanie Joly squared off at McGill’s Tanna Schulich Hall at the televised event hosted by CBC’s Andrew Chang. This English language debate was the second round of Mayoral debates, the first of which was held on October 9th at Redpath Hall.

The main issue of the debate, and of the entire election, was corruption and inefficiency at City Hall. All of the candidates used much of their face time to touch on the ways in which they would combat corruption and improve the inner workings of the municipal government.

Coderre was often at the centre of attacks, as early polls have placed him well ahead of the other three candidates. Questions were raised about Coderre’s municipal team, of which a quarter consists of members of the previous disgraced municipal administration. Showing his political experience, Coderre remained calm under the spotlight. “[My staff] is not guilty by association,” he asserted. He emphasized that his team consists of a majority of newcomers and that the other members are valuable due to their many years of experience.

To combat corruption, Coderre suggested creating a department of an Inspector General to monitor political activity at the municipal level. Joly questioned Coderre as to why Montreal needed only one Inspector General, appointed by municipal staff, when there could be “1.2 million Inspector Generals” by increasing transparency at City Hall.

The next round of questions focused on Montreal’s infrastructure and public transportation system. All candidates seemed to agree with Joly’s idea of a Rapid Bus Transit system running across the island, linking the boroughs to the downtown core. While Bergeron drew some heat over his position, which some call “anti-car.” Bergeron insisted his plans included compromises for automobiles, cyclists and pedestrians alike, but added that the biggest nightmare of the coming decade will be congestion caused by car traffic.

Côté was the most forthcoming with his answers. Notably, he does not see an extension of the Metro to the West Island as a feasible solution to commuter headaches.“There won’t be a metro to the West Island,” he noted. “It is ridiculous to spend $350-400 million per kilometre when you already have two trains.” Instead Côté argued for improved road conditions and additional bus lanes.

The third issue of the debate was the rejuvenation of the city. The situation of taxpayers leaving the city of Montreal for neighbouring suburbs, in particular francophone middle class families, was much more of a priority for Bergeron than Coderre. Bergeron pointed out that Montreal could be losing out on billions of dollars with the suburban population, while Coderre found solace in the fact that Montreal still has a surplus of newcomers every year.

Finally, the candidates were asked questions about the proposed Quebec Charter of Values.While the crowd seemed eager to hear the topic debated, the candidates were almost completely in agreement over the issue. All of the candidates outright opposed it, but wanted to wait until it is finalized before going to war against “trial balloons,” as Coderre put it. Coderre was the only candidate to state that he was willing to go to court if the Charter came to be, while Joly said she would submit a motion for debate to City Hall should anything concrete come of the proposed Charter.

Recognizing the English setting of the event, all candidates used Tuesday’s debate to reassure their commitment to Anglo voters. Both Côte and Bergeron mentioned their fears of repeating Quebec’s loss of hundreds of thousands of English speakers to other provinces during the 1970s.

Joly’s shopped her 10-point action plan as the most concrete and practical plan of the four candidates. In her plan she suggested creating several committees and teams to oversee city projects, an idea she said was inspired by New York City’s Mayor Bloomberg.

Instead of pledging too many specific new plans, Coderre offered his political experience to deal with the problems at City Hall. “If we promise the world, nothing will get done,” he explained. Côté countered by comparing the running of a municipal government to his experiences managing in the business world, offering his common sense and practical attitude to “keep the shop clean.”

Bergeron admitted he may be more optimistic and ideological than the other three candidates, but made sure to note that his team at Projet Montreal had extensive experience and pragmatic plans for the future of Montreal.

The election will be held on Sunday, November 3rd.

The major issue for the 2013 Mayoral race is corruption. Each of the four major candidates have promised various ways of dealing with the crippling corruption that has plagued Montreal City Hall for years. Other main issues include keeping families from moving off-island and improving the city’s infrastructure. According to reports going into Tuesday’s debate, Denis Coderre held a strong lead over second spot Mélanie Joly, although a sizable number of voters have remained undecided or willing to change their decision.

Bergeron was the Montreal city councillor for Jeanne-Mance district of the Plateau-Mount-Royal borough. He has a PhD in Urban Planning, worked as a Professor of Regional Planning and Development and has authored several books on the subject. Leader and founder of Projet Montreal, an urbanist group aiming to revitalize Montreal sustainably through pedestrian and cyclist friendly planning.

Promises: Cut car traffic downtown by 50% in 20 years, partially by having electric tramways running by 2017. Connect all parts of the city with efficient and affordable infrastructure. Police would be banned from using rubber bullets to control mass protests.

Sentiment: Some call him anti-car and too idealistic

Coderre was the Liberal MP for the riding of Bourassa in Montreal from 1997 until earlier this year when he resigned to run for mayor.  He heads the new Equipe Denis Coderre group of municipal candidates. He became Secretary of State for Amateur Sport in 1999, Minister of Immigration in 2002 and in 2009 was named the Quebec Lieutenant of Liberal Leader Michael Ignatieff, although resigned later that year over disagreements with Ignatieff

Promises: More free public WiFi spots, cell service in the the Metro, and GPS on buses to be able to track them in real time. Better coordination of aqueduct and sewer work with surface repairs with the creation of a coordination committee

Sentiment: His views on corruption at city hall seem to be the softest of the four main candidates

Running for the Coalition Montréal, a combination of independents and Vision Montreal, a municipal political party led by Louise Harel. He is an economist by profession and founding member of SECOR, a strategic management consulting firm. He has had several studies and papers published on public policy and the economy, including works specifically on the economy of Montréal. Has chaired the board of directors of the Montreal and Québec YMCA’s, as well as sitting on several other boards. Côté served as Director of Strategic Planning and Communications for Prime Minister Mulroney and economic advisor to Premier Robert Bourassa.

Promises: A ”Quiet Revolution” at City Hall, including shedding a number of upper level management positions in order to increase efficiency. Focus on attracting and keeping students, and creating a more dynamic and knowledge based economy.

Sentiment: Voters have yet to embrace his business oriented approach.

Running for the group Le vrai changement pour Montréal. A lawyer by trade and has worked briefly as a journalist. Was named le Conseil supérieur de la langue française by Premier Charest in 2008. She worked as chief organizer on Justin Trudeau’s leadership campaign last spring. Elle Québec magazine named Jolly Québec one of their women of the year in 2008 and Les Affaires named her one of Quebec’s Top 15 women Changing Québec in 2009.

Sentiment: Inexperience may be an issue for the youngest of the four main candidates.

I know you’ve seen them. On that girl skating at TRH-Bar, on that frowning softboy shivering while he walks to…