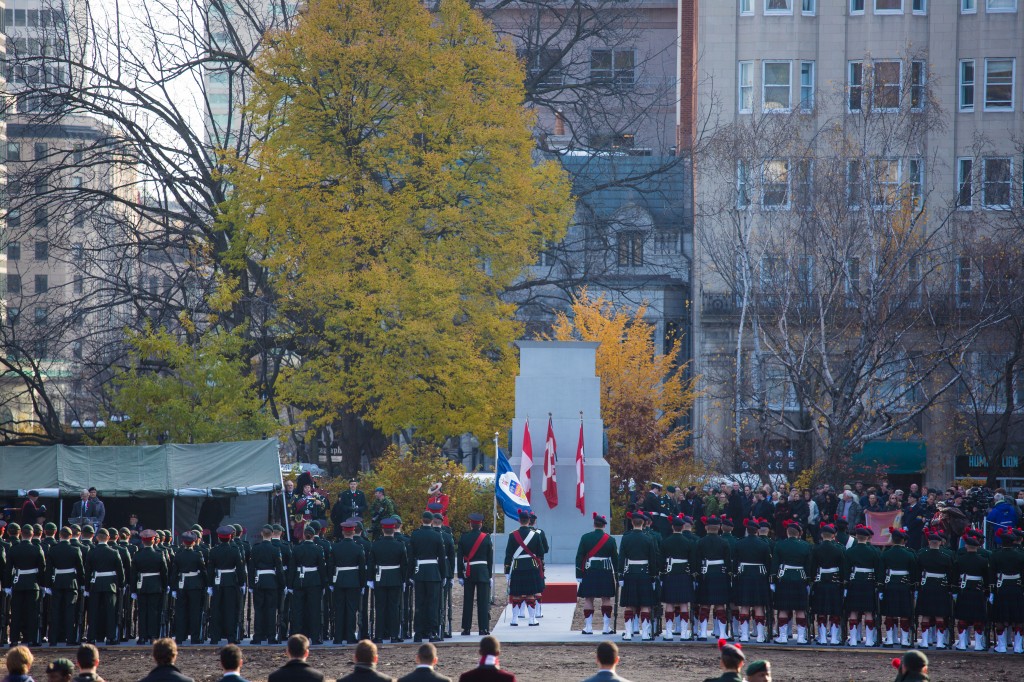 This year’s ceremonies were particularly significant, marking the 100th anniversary of the start of the Great War. McGill Chancellor Michael Meighan addressed the crowd to speak about the contributions made by the McGill community to the war effort. He noted that the ground upon which guests were standing had been used by student soldiers and faculty to parade and march as part of the McGill University Contingent of the Canadian Officers’ Training Corps. 3,059 McGill students and alumni served in the First World War with over 800 decorations awarded, including two Victoria Crosses. More than 360 Soldiers from McGill died during World War I. 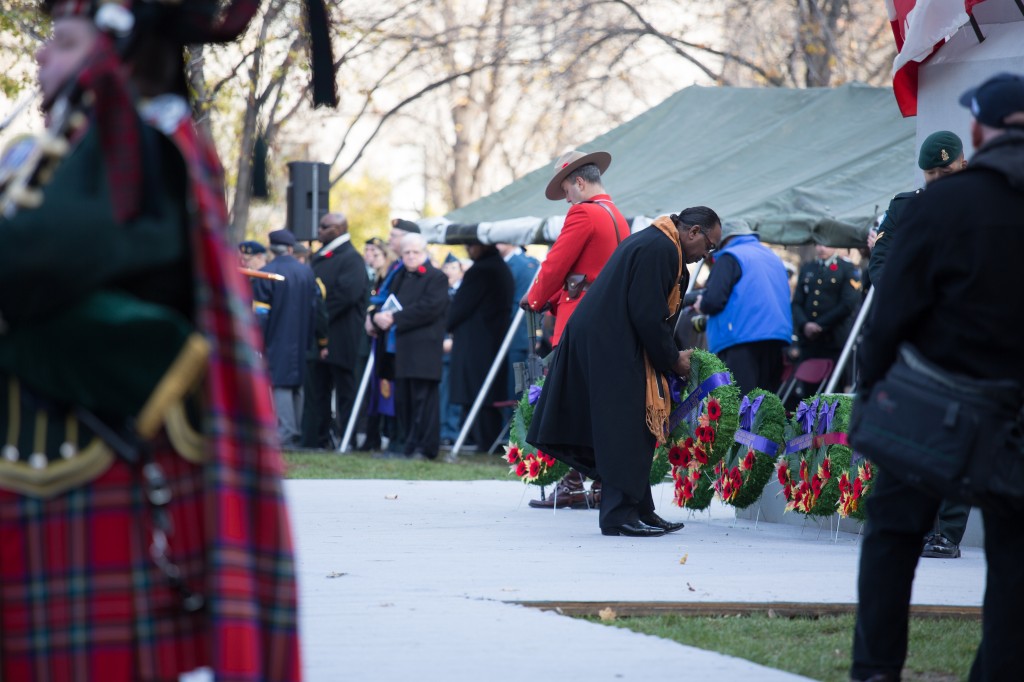 Chancellor Meighan also touched on the recent events which occurred on October 20, 2014 in St-Jean-sur-Richelieu, Quebec and October 22, 2014 in Ottawa that lead to the death of Warrant Officer Patrice Vincent and Corporal Nathan Cirillo.

“Recent events have made us realize that our soldiers can be in harms way even when at home… Our debt to them is enormous” said Meighan.

Prior to the ceremonies, McGill informed students, faculty and the community that due to the two recent attacks on members of the Canadian Forces there would be an increased security presence at this year’s event. There were a considerable number of SPVM (Service de Police de la Ville de Montréal) officers on campus as well as undercover security and McGill security guards.

Meighan announced that the McGill Book of Remembrance, which lists McGillians who died in both the First and Second World Wars, will be housed for public display in the passage between the McLennan and Redpath Library Buildings. The original, restored, Book of Remembrance will be archived permanently in the McGill University Archives collection in the McLennan Library Building.

Demilitarize McGill engaged in a silent demonstration against the ceremonies, standing on the stairs of the Redpath Museum with a large, red and black cloth banner with text written on it that read, “Lest We Forget”. Other members held up signs and passed out flyers. The group then moved to the Redpath McLennan Terrace and stood behind the crowd. Group members present and protesting declined to comment. 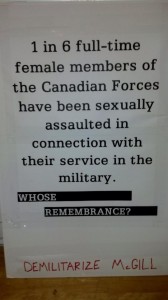 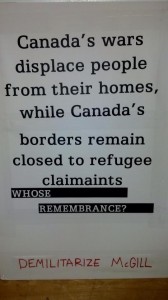 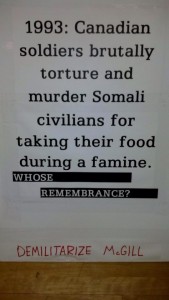 “One in six full-time female members of the Canadian Forces have been sexually assaulted in connection with their service in the military” was written on one sign.

Another stated, “1993: Canadian soldiers brutally torture and murder Somali civilians for taking their food during a famine.”

“In the three months following the start of the new US war in Iraq, shares in weapons manufacturer Lockheed Martin [had] risen 9.3 percent” read another. 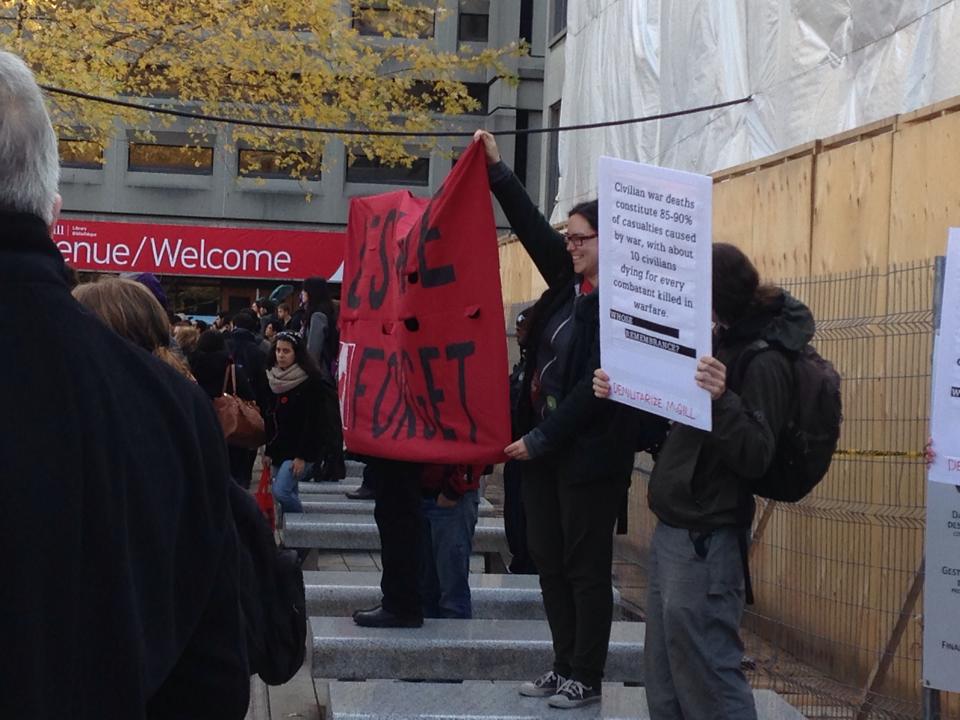 The protest has sparked intense debate on social media, most notably on the Demilitarize McGill Facebook page. A large majority of students are calling the protests disrespectful and embarrassing. While students are acknowledging that Demilitarize has a right to freedom of association and speech, many are questioning the appropriateness of the time and place that was chosen. Conversely, some students have expressed support for Demilitarize online and defended the actions taken during the ceremonies. After the ceremonies, Demilitarize reposted their 2013 op-ed in The McGill Daily, titled “Misremembering Warfare,” on their Facebook page. 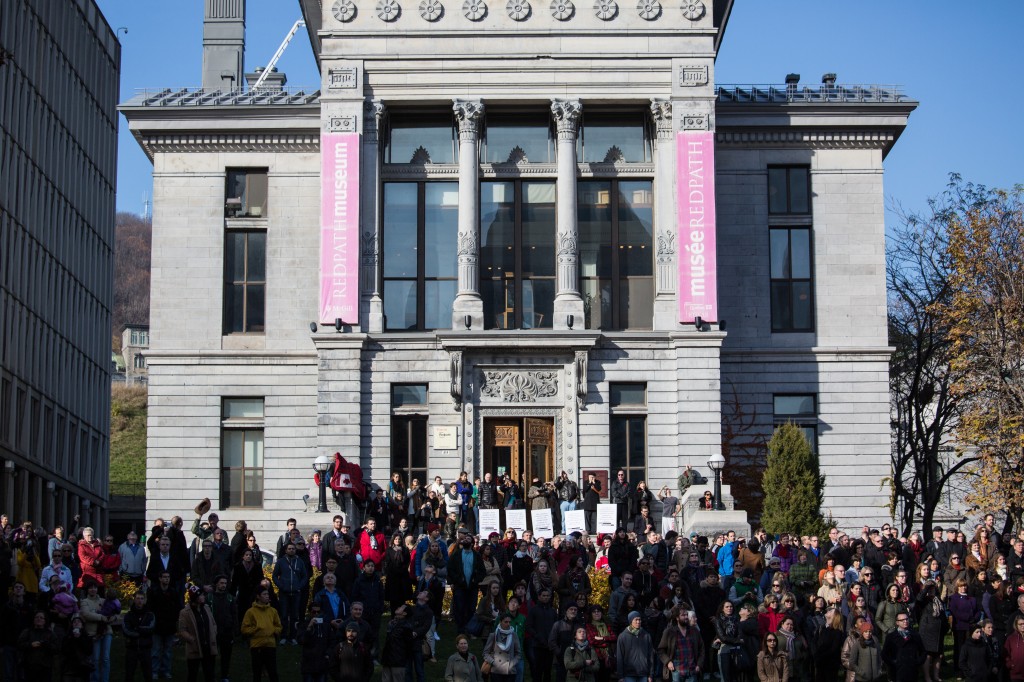 Although there were no cannons present at the ceremony this year, two helicopters flew overhead. Current members of the armed forces and veterans filled the crowd and the “Last Post” was played following a moment of silence. As the ceremonies ended and participants marched off the field, spectators applauded.

Hello! Thanks to a Google alert, I found this recent article and felt compelled to respond.  As an apple grower…