This year, 2021, marks the Bicentennial anniversary of McGill University. The school was built on a land bequest by James McGill in 1813, but the “McGill College” was officially opened in 1821. Throughout its history, McGill has been at the forefront of medical, scientific and technological innovation.

However, over the past two hundred years, the demographics of McGill’s prestigious cohort have evolved greatly. The Bull & Bear sat down with faculty and students to discuss what 200 years of McGill represents to them.

Perhaps your Redbird spirit isn’t flying too high and you feel a bit indifferent about the ‘Big 200.’  In that case, fret not. Some former staff, such as professor Witold Rybczynski, feel the same way about the Bicentennial. “No, I wasn’t aware of it,” said the professor, who previously taught in the architecture department for nearly twenty years before taking on a new position at the University of Pennsylvania. “I guess it’s a good excuse for a party.”

McGill is a couple of blocks from Place Ville-Marie and the real center of things. And it’s that quality that I think you can still feel a kind of ‘green island’  literally in the middle of the city.

Now thirty years after publishing “McGill: A Celebration,” Rybczynski says that the namesake essay in the book is really more about Montreal, “or at least, Montreal seen through the eyes of somebody going through McGill, and the sort of little circumscribed world that you make for yourself as a student.” Though Rybczynski’s old haunts—Bens De Luxe Delicatessen, countless smoke-filled jazz clubs, the Three Kings Studio (a weaving shop where architecture students used to buy hand-woven ties)—may be gone now, the McGill campus remains a crucial part of the downtown fabric.

“There are very few universities like this,” Rybczynski says, regarding the school’s downtown location. “McGill is a couple of blocks from Place Ville-Marie and the real center of things. And it’s that quality that I think you can still feel a kind of ‘green island’  literally in the middle of the city.”

A campus that looks a lot different than in the past

Whether you see the bicentennial as a genuine cause for celebration or simply just a good excuse to party, there is no denying that the school’s population, across faculties, has become more diverse over the years. Though Rybcyznski says there were few women in the architecture program when he was a student, and even when he started teaching, he estimates that the gender ratio is about an even split in the program today.

The McGill student body was initially composed of only a small group of wealthy, anglophone, Protestant men throughout the 19th century. Women only came in after a struggle for inclusion in the 1880s. The diversity in the student body expanded in the interwar years, with increasing numbers of women and international students arriving  mainly from the British Empire in the Caribbeans, explains Suzan Morton, a professor in the department of history.

After World War II, a democratization of access to education and universities for the lower and middle classes led to the arrival of many first-generation students. Paradoxically, by the 1990s,  as tuition for universities rose, so did the influx of international students that began to form the diverse student body that McGill University has today.

“McGill has also changed dramatically for faculty members since I came in 1992,” explained Morton, who was hired at a time when there were still few female professors on campus. “Diversity is also about being able to see yourself. We still don’t have parity, but students have to be able to imagine themselves and see themselves in terms of who’s in front of the classroom. It’s been thirty  years since young women would recognize somebody teaching in front of the classroom, and we have so far to go in terms of diversifying our faculty.”

Diversity is also about being able to see yourself. We still don’t have parity, but students have to be able to imagine themselves and see themselves in terms of who’s in front of the classroom. 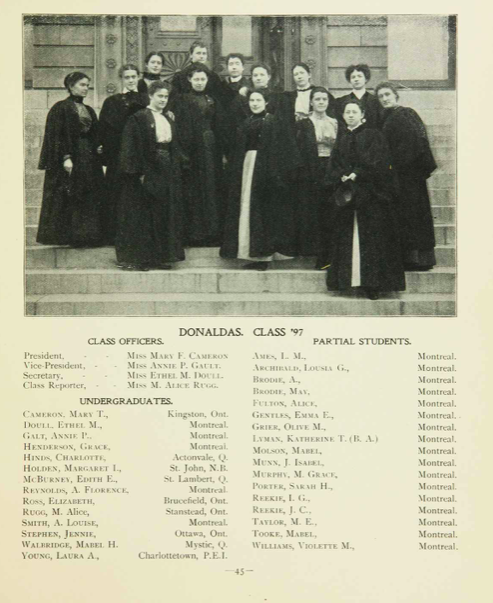 Where do we go from here? Decolonizing the lecture hall

Indeed, a bicentennial also offers a great time for reflections on institutional  progress. McGill is working towards acknowledging its colonial past and plans to continue doing so in the coming years. The Indigenous Student Association emphasizes that the bicentennial has to be seen as an achievement but also as an opportunity.

“It is lovely to celebrate the success and brilliance that has come out of the University over the past 200 years, but we must also contrast these achievements with others that could not happen. James McGill founded and consequently ingrained colonial systems into the University. Two centuries is an extremely long time for this institution to have operated on oppressive power structures, and during this period, the university has subsequently lost out on even more (academic) success.”

“The nature of these oppressive power structures intimidates, disfavours, and discourages many potential students; as a result, multiple brilliant minds have and continue to be excluded from learning environments such as McGill University because its colonial legacies are ingrained, discouraging, and omnipresent.”

Heleena De Oliviera, U3 Arts student and president of the Black Student Network (BSN) at McGill, explained that the bicentennial was also an opportunity for cooperation. For instance, the BSN and the ISA worked with the administration to create the Plan for Action Against Racism, which was released this past fall.

“Acknowledgement has come, now McGill is working on cultivating a space of equality on campus, which can start by removing the statue and placing it in a museum where it can be contextualized,” de Oliviera explained. “I believe that Black folk, faculty, staff, and students are also working very hard with administration to make McGill as good, inclusive, and respective as it can be.”

Acknowledgement has come, now McGill is working on cultivating a space of equality on campus, which can start by removing the statue and placing it in a museum where it can be contextualized.

Ayo Ogunremi, VP External at SSMU, detailed how SSMU has changed its structure in recent years to advocate for inclusivity across campus.

According to Ogunremi, new initiatives include the creation of equity committees that aim to support minority demographic student groups, such as the Indigenous Affairs Committee, whose past commissioners, then-students Thomas Jirousek and Karli Loft, organized the “Change the Name” Campaign in 2019. In addition, the Black Affairs Committee, the Gender and Sexuality Committee, and the Accessibility Committee were all inspired by students from those respective demographics who are fighting for better social and political representation at McGill.

These committees allow students to  campaign directly for inclusivity initiatives with SSMU, explained Ogunremi. By diversifying SSMU resources, more is allotted to specific demographics, rather than all equity needs being funnelled through a single committee.

Originally a small college that offered classes to an exclusive,privileged group, McGill has since expanded to one of the most diverse student bodies in Canada, with an international student population of approximately 30%. While the university has made many strides in its effort to increase inclusivity and diversity, there is still a lot more work to do going forward. Let’s check back in another hundred year’s time and see where we are at!

For students who are seeking aid or looking to get involved with equity initiatives, here are some possible contacts..

Summer is finally here! Whether you’re working, taking a summer course, or giving yourself a well-deserved break, it’s important that…