If you’re a Canadian citizen and have been living in Quebec for the past 6 months (regardless of whether you’re a Quebec citizen or resident), you’re eligible to vote in Monday’s provincial election. The riding that encompasses McGill is Westmount St Louis, where 7 candidates are running for the MNA position. Below are short synopses of their platforms as well as material from the Candidates’ Debate at McGill on September 19th. 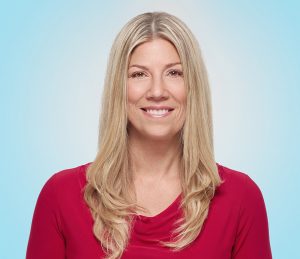 Liberal Party candidate Jennifer Maccarone has lived in the Westmount St. Louis riding for 7 years and is passionate about education and language and minority rights, among other issues. Her professional background is in student advocacy and she is the immediate past president of the Quebec English School Boards Association.

When asked why she’s the best candidate for the position, Maccarone emphasized her passion for education, saying: “Student rights, and ensuring that you’re receiving absolutely the best education possible, is a huge priority for me.” She referenced the Liberal Party’s recent investment into youth employment services.

When asked about her party’s policy towards universal dental coverage, Maccarone replied emphatically that the party lacks a free dental program for everyone, but covers those 16 and under and seniors. “I’d like to tell you that everything is free, but there’s no such thing as free,” She said. “Everything has a cost and as a taxpayer… I worry when we say that everything is free, because it’s all about balance.”

Maccarone expressed her opposition to the deregulation of international student fees, believing that money from international students’ tuition supports domestic rates. She supports Bill 62 and believes it has nothing to do with exclusion, but rather reinforces our ability to live together. Regarding immigration, she described the Liberal Party as “the party of inclusion” and expressed a desire to increase the number of immigrants coming into the province, ensuring that we meet the labour shortages.

Read about her on the Quebec Liberal Party’s website here. 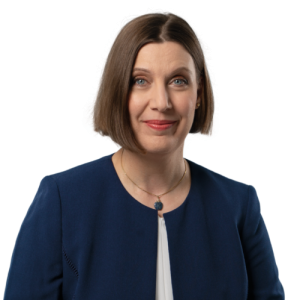 Jocelyne Marion Benoit, the candidate for the Parti Quebecois, is the former treasurer of the PQ Executive in the Westmount-Saint-Louis district, and holds degrees in philosophy, biology, and educational sciences.

When asked about a student dental plan, she replied that though they lack this type of plan, the PQ are proposing the decentralization of medical care. She went on to add that the party believes it would be beneficial to have an on-campus medical service available seven days a week.

Though it’s off the table this election, Benoit and the PQ promote a sovereign and unified Quebec. She believes that the current Federalism “just doesn’t work,” and until it does, she’ll continue to be in favour of Quebec sovereignty.

Benoit believes that immigration levels should be proportionate to the needs of the province’s labour supply. The PQ believes it’s necessary that all immigrants are able to speak French upon arrival and are willing to pay for their classes in their country of origin. She also feels strongly that diplomatic ties with France are important and that the French bring both skills and the French language into Quebec. She and the PQ are in favour of reversing the Liberal Party’s decision to augment the tuition for French students.

Benoit is against Bill 62, calling it “too vague and non-applicable.” She stated, however, “les vêtements qui sont suggestives d’une asservissement des femmes, ne sera accepté.” Any clothing suggestive of women’s inferiority is unacceptable as gender equality is a “non-negotiable value” of the PQ. Despite their stance on the bill, the party believes that anyone in positions of authority must remain religiously neutral and will ask employees of the province to be discreet with their religious background. 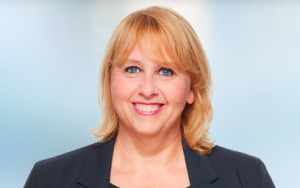 Michelle Morin is a businesswoman, former athlete, and single mother. She has 23 years of business experience, is the daughter of an immigrant mother, and is currently the President of a business consulting firm.

Morin is in favour of increased access to educational opportunities, and wants to provide learning disability testing to school-aged children in order to enable  them to access the necessary tools and services for a successful education.

The CAQ plans to provide dental care up to the age of 18, but lacks a plan for university students and adults. Morin explained however that “we are very open to meet with all parties to discuss if there is a possibility to have a universal dental plan.” She went on to assert the party’s plan for healthcare, saying: “We want to make sure that every child has a paediatrician, every adult has a family doctor, and that people are able to access a family doctor within 36 hours.”

Emphasizing the CAQ’s insistence that immigrants learn French, Morin shared that her mother learned the language in one year and felt it was central “[in order] to be able to live a good integrated life here.” She is also passionate about diploma recognition for immigrants, saying: “For us it’s important what you’ve learned, not where you learned it. We want to start the recognition process of your diplomas before you ever leave your countries, so when you come to Canada, you are able to have a good job in your field.”

Morin referred to Bill 62 as “too subjective” and declared the CAQ’s plan to eliminate it. She does however believe that if you’re receiving medical care, for security reasons, or in positions of authority “it’s important to see [a woman’s] face.”

Read more about her on the CAQ’s website here. 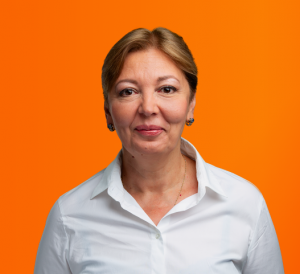 Originally from Moscow, Quebec Solidaire candidate Ekaterina Piskunova is a professor of Political Science at University of Montreal and a mother of two. She is passionate about equal access to education, women’s rights, and democracy.

When asked about dental coverage for students, she described that though the party lacks a plan for university students specifically, they do have one that covers everyone. She said, “it will be free for minors and elders and it will be from 60-80% coverage for all adults including students.”

She’s in favour of an independent Quebec, but believes that voters, including the English-speaking community, shouldn’t be scared of that. She distinguished between the concepts of “independence” and “sovereignty”, saying : “You should consider [independence] more as an opportunity than a threat, because we need all this necessary leverage for our decision making – including climate change.” She cited her distaste for the Trans Mountain Pipeline and outlined how the province could better fight that with more independence: “For us, independence, it’s not a goal like it was – or still is – for PQ. It’s a tool to be able to fight environmental and other social challenges.”

Piskunova and QS are in favour of free education for everyone, including international students. She is “strongly against” Bill 62, and believes that “once you put a human in the core of politics, you have no choice but to respect his freedom of choice.”

“QS is conscious that Quebec has its problems with regards to immigration, and that’s why we’re the only party who proposes an investigation into systemic racism in Quebec.”

Read more about her on Quebec Solidaire’s website here. 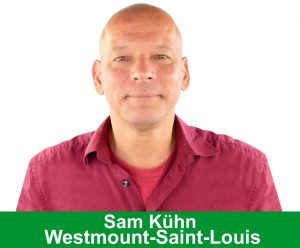 Sam Kühn is an activist and father of four. He was inspired to run as the Green Party candidate in a quest to obtain essential services for his daughter, who is nonverbal and on the autism spectrum but was denied speech therapy under the current government. He is passionate about access to healthcare, environmental protection, and racism and Islamophobia.

He described the party’s plan for universal health and dental coverage, saying: “The Green Party supports universal dental care, and with regard to the health system as a whole, I’m here because of my daughter.. and when I look to the party, I want a party that’s going to help my kids…and for adults as well. And so what we have is things like occupational therapy, speech therapy…being here tonight is part of our campaign to make sure everyone is covered in Quebec with decent healthcare, and that includes dental.”

His values are in line with the long term goals of the Green Party, including decentralization of federal powers and veto power over for the provinces, as well as indigenous peoples. “The Green Party’s not just environmental, its social justice,” he said.

Kühn is “non-negotiably” against Bill 62, and described his pro-immigration stance, claiming: “We want to increase immigration to 20%, we want to welcome refugees and abide by our international commitments, but most of the parties here in one way or another are pandering to this fear of Islam, and as someone who marches in the streets against the fascists… I think that’s deplorable.”

Read more about him on the Green Party of Quebec’s website here. 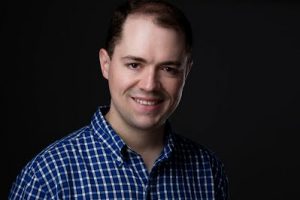 After a decade away from the political arena, the NDPQ will be re-emerging for this election. Westmount-Saint-Louis candidate Nicholas Lawson holds a Ph.D in Economics from Princeton University and is currently a professor at UQAM.

He advocates for the decentralization of decision making and services implemented by the current Liberal government and Gaétan Barrette, as well as the reversal of Bill 10. “We also are in favour of a universal dental coverage,” he said, “[but] our platform says that would be more of a medium term goal as we think there are a lot of priorities to deal with in the short term.”

He and his party believe in free education: “The spillover benefits, in terms of increasing the productivity of the economy in general, justify not only free tuition, but stipends to students. We’re not at this point going to go that far, but we think that tuition should be free. For everyone.”

He vocalized that the NDPQ is not only in favour of raising the minimum wage to $15 an hour, but also for guaranteed minimum income as a way to combat poverty and encourage economic growth. He outlined some details of the plan, which would start at a thousand dollars per month and would replace current social assistance and tax credits aimed at low income individuals.

The NDPQ and Lawson value the environment and sustainability. “If we can get polluting cars off the road and use the clean energy that Quebec produces, we can make a real impact today,” said Lawson of about the electrification of transportation.

Read more about him here. 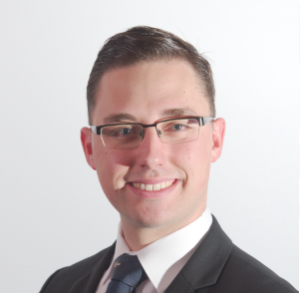 Mikey Colangelo Lauzon is a project manager trained in Human Relations and the Governance of Public Organizations. He is a former tinsmith and luthier and is the current Financial Officer for the Conservative Party of Canada Electoral District Association of Notre-Dame-de-Grâce-Westmount.

When asked if the $12/hour minimum wage is enough, Colangelo replied that though he believes it limits one’s ability to be fiscally impactful, he doesn’t plan to change that. Instead, he wants to “give more efficiency to the 12 dollars. For example, we propose for each and every family in Quebec a tax cut of 36% [and to raise the personal exemptions] so that your 12 dollars will be much more efficient.”

He and the PCQ are opposed to separatism but support an inter-province free trade agreement. “We are in favour of free trade agreements between all the other provinces, as long as it benefits Quebec of course. So for example, if I want to go buy some nice porto from the wine valleys of British Columbia, I have the right to do it,” he said.

Colangelo is in favour of eliminating the carbon tax, claiming: “We trust in climate change, of course, but taxing will not change any part of that.” He supports Bill 62 and believes that it honours the province’s commitment to remaining a secular society.

Read more about him on the Conservative Party of Quebec’s website here.

A prank is defined as a “trick that is intended to be funny but not to cause harm or damage,”…