I remember the day I went to see Sailboats  clearly. It was a warm late September afternoon, right before the announcement that the city of Montréal was going back into a red zone lockdown. Sailboats is an exhibit created by the Collectif Escargo for the Montréal Museum of Fine Arts (MMFA). The installation runs up Du Musée Avenue right next to the museum. The exhibit consists of multiple sections of the road, painted in a variety of colours, from orange-red to turquoise and purple. A flower box runs through the installation near the middle, with purple and white flowers that echo some of the colours painted on the road. The exhibit is outdoors and spacious, which made it the perfect art installation to visit during this time. 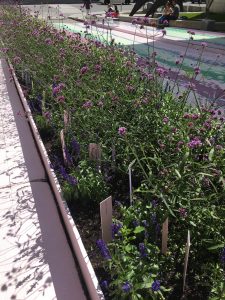 Sailboats draws its inspiration from the MMFA’s Paris in the Days of Post-Impressionism exhibit, especially Paul Signac’s paintings of the ocean. Signac was well known for loving the French Coast, and he would sail out for days at a time by himself to find inspiration for his canvases. By re-imagining Signac’s paintings as a ground installation, such that viewers can walk next to it or sit and observe, Collectif Escargo returns a sense of immersion to Signac’s art style that can be lost when peering at a two-dimensional painting hanging on a wall. Although the dots are still painted flat on the ground , the way in which the space is arranged makes Sailboats stretch out in front of the viewer like a real sea landscape would. 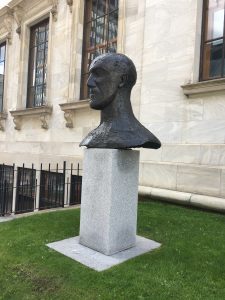 Collectif Escargo is a collaborative artist organization founded in 2015. There are three members: architect Karyna St-Pierre and designers Pierre-Yves Diehl and Julie Parenteau. I find it fascinating that Collectif Escargo was chosen to do this installation, considering that Signac was usually a solitary painter. Although he worked with other impressionists to help develop pointillism, he painted most of his pieces on his own. The members of the Collectif, on the other hand, pride themselves on dividing everything equally, from the design, to the painting of the final project. By working together, they are able to open up Signac’s vision even more and share it on a much larger canvas: the streets of downtown Montréal.

The materials used are also an interesting choice. The way in which the edges of each plywood panel are visible upon close inspection segments the piece. It resembles the construction scaffolding creeping up the nearby buildings, and draws attention to its own impermanence as a temporary exhibit. The choice of wood puts the emphasis on a natural element, perhaps an allusion to the kinds of boats in which Signac sailed while looking for the coast. 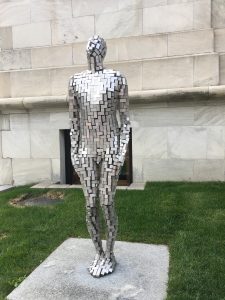 According to Pierre-Yves Diehl, the collective “imagined [Sailboats] as a large surface of sparkling pixelated water, upon which the users would be sailing boats.  The way in which Signac’s pointillist style has been translated into pixels is fascinating. In the 21st century, it seems like everything has been digitized, even art styles. One edge of the piece has an almost ribbon-like stream running down it with little pixels clustered around certain points, reminiscent of a data stream. It was a riveting sight to see, especially because it emphasized some of the many ways that nature and technology can intersect. 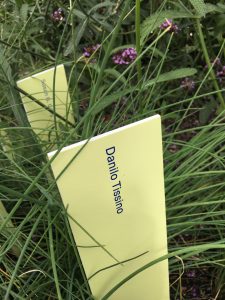 On the plants are plaques that showcase the names of donors to the 2019-2020 annual fundraising campaign of the MMFA Foundation. (Photo by Sam Shepherd)

Overall, this exhibit was a wonderful way to spend an autumn afternoon. I found that I could spend a lot of time lingering there, tracing the curves of colour that swooped over the whole installation and noticing how each pixel branched off. Sailboats will be on view until November 15, so if you haven’t gotten the chance yet, I suggest you go and check it out!

For many of us, back-to-school usually looks like a line wrapped around the lower field and being a little drunker…