Prompted by the national conflict surrounding Coastal GasLink’s attempted construction of a multi-billion dollar natural gas pipeline through First Nations lands, a wave of activism has surged through Montreal in the past week.

Indigenous protests have been active and recurrent for decades in response to various trans-national pipeline projects. Currently, the Coastal GasLink pipeline is particularly contentious. Set to run through Wet’suwet’en territory, ranging from Dawson Creek to Kitimat in British Columbia, the pipeline is strongly opposed by the hereditary chiefs and peoples of Wet’suwet’en nation. Protests nationwide include the Ottawa train blockade and youth protests in Victoria occupying the Canadian parliamentary building.

Catie Galbraith, co-chair of the McGill Indigenous Student Alliance (ISA), called to “shut down Canada” in response to the government’s “most important cession of sovereignty since Delgamuukw.” Addressing Trudeau and his administration, Galbraith explained why Montreal is a crucial place for disruption.

“We are the people that Justin Trudeau is meant to be representing,” said Galbraith. “He is meant to be accountable to us, so when we say to get the fuck off of our land, it is his job to listen.”

On Monday, February 13th, Indigenous youth groups, McGill students, and Montrealers demonstrated in front of Justin Trudeau’s constituency office in the Montreal district of Papineau, standing in solidarity with the Wet’suwet’en. The protest, which was organized by the ISA, was a response to the Royal Canadian Mounted Police (RCMP) raids on February 6th, which led to the arrests of six land protectors on Wet’suwet’en territory.

[We are] talking about decolonization, and it is about time that more settlers start unifying with the indigenous peoples whose lands we occupy.

Yesterday, on February 17, Indigenous Youth for Wet’suwet’en and their allies gathered between the intersection of Sherbrooke Street and McGill College Avenue, “holding sovereignty…  in mobilizing against the Government of Canada’s invasion of unceded Wet’suwet’en territory” according to a press release from the movement. Blocking the streets, demonstrators chanted traditional songs, carried signs, and chanted their support.

Since the 1997 Delgamuukw v. British Columbia case, the Supreme Court of Canada has affirmed the principle that hereditary chiefs have legal jurisdiction over their lands. This principle is recognized by Indigenous, Canadian, and international law via the United Nations Declaration of Rights of Indigenous Peoples (UNDRIP). Article 10 of UNDRIP states that, “Indigenous peoples shall not be forcibly removed from their lands or territories”, and that “no relocation shall take place without the free, prior and informed consent of the indigenous peoples concerned.” This makes the recent actions by the Canadian government and armed forces illegal on multiple levels.

Last December, however, the B.C. Supreme Court extended a 2018 injunction against Wet’suwet’en protesters, part of which allows the Royal Canadian Mounted 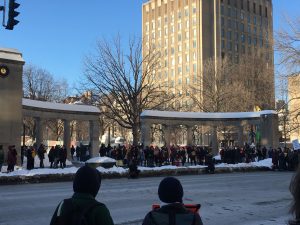 Police to enforce the removal of Indigenous peoples to continue the construction of the pipeline.

The February 13th demonstration, denounced the acts of the Canadian Government and the RCMP against the Wet’suwet’en peoples. Resistance chants such as, “When I say land you say back”, or, “That’s bullshit, get off it, this land is not for profit” resonated between the speeches of Indigenous Youth Representatives, Inuit throat-songs and traditional Indigenous drum accompanied songs.

As McGill U3 Arts student and protestor Lucy Everett explained, these demonstrations are even more crucial due to the media blackout in Wet’suwet’en territory.

“One of the most important things about rallies like this is keeping the pressure on the media, and keeping the pressure in the public eyes,” said Everett. “Because journalists are not getting let through in the territories, there is really little way of knowing what sorts of abuses the RCMP might be committing right now.”

It is time for all the people of Canada, both indigenous and non-indigenous, to fight back against the witnessed injustices on Indigenous land.

The rally expressed the importance of standing with Indigenous Peoples not only in regard to the climate crisis, but also in order to “dismantle the settler-colonial institutions of Canada that have persisted since the creation of this country”, and that leads Canada to pursue “settler-colonialism and anti-ecological policies in the name of ‘progress.’” Everett addressed this point, emphasizing that  “we need to realize that when talking about Indigenous Rights, we’re talking about decolonization, and it is about time that more settlers start unifying with the indigenous peoples whose lands we occupy.”

McGill U4 Arts student Simona Bobrow, a protester, emphasized the duty and responsibilities of non-indigenous allies in the Wet’suwet’en demonstrations. “A lot of people here are both allies and settlers,” said Bobrow. “It is important to recognize and acknowledge that it is time for all the people of Canada, both indigenous and non-indigenous, to fight back against the witnessed injustices on Indigenous land.”

She continued by highlighting not only the importance of voicing our dissatisfaction and participating in rallies such as this one, but also directly taking actions by complaining to government representatives, and “sending donations to support Indigenous protectors on the front lines.”

As you all know, there are two kinds of people in this world: sharks and everyone else. Though created from…