The New England Patriots will face the Los Angeles Rams this Sunday during Super Bowl LIII. Both teams were able to have impressive regular seasons and then advance through the playoffs, yet they did so with contrasting quarterback-and-coach duos. Tom Brady and Bill Belichick of New England are older and the far more experienced duo, winning multiple Super Bowls together, but Jared Goff is taking the league by storm with his fantastic play under the youngest coach in the NFL, Sean McVay. This disparity in age raises interesting questions, will the legendary Patriots hand the torch over to the young Rams, and who is the “better” quarterback going in to the Super Bowl? Analysts and former players can debate both sides based on the old eye test but maybe the answer lies in the NFL’s new Next Gen Statistics. 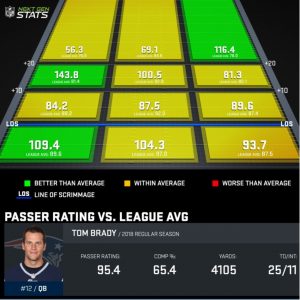 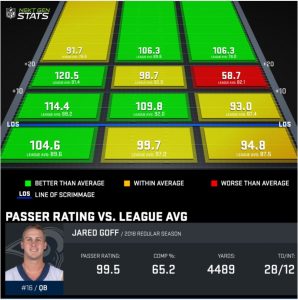 Passer rating is a cumulative a metric based on passing attempts, completions, yards, touchdowns, and interceptions that has been used since 1973. Based on regional passer rating, these charts show that the younger Goff is playing at a very high level and quite similarly to Brady this season, priming them for a fantastic duel in the upcoming Super Bowl.

The data used in creating these charts are only a part of the NFL’s Next Gen Stats partnership with Amazon Web Services (AWS), who have provided the NFL with their Amazon Cloud service, data analysis tools, and machine learning software, SageMaker. These tools allow the NFL to process big data, captured by sensors that are placed in the stadiums and on the field, including on players, referees, balls, and pylons. With these tools, the NFL has the potential to change not only the future of broadcasting and team preparation, but also how fans understand, appreciate, and enjoy the sport.

With these tools, the NFL has the potential to change not only the future of broadcasting and team preparation, but also how fans understand, appreciate, and enjoy the sport.

“We’ve been turning a corner on creating metrics that are more advanced and do a better job of telling the story of the game…There’s some very complicated parts of football that can be really fascinating to die-hard fans,” said Matt Swensson, the NFL’s Vice President of emerging products and technology.

Currently, AWS has been integrating its services with NFL broadcast partner, CBS, to bring visualization of advanced metrics to their broadcasts, while providing commentators with speaking points to elaborate on this data. Pairing this with leading CBS commentator, former Cowboys quarterback Tony Romo, who has received high praise for his ability to predict plays and tactics, CBS can provide fans with increased immersion into the strategic components of how NFL teams play. CBS, however, is not the only broadcasting partner implementing Next Gen Stats into their broadcasts, as NBC has introduced a Field Goal metric that shows the distance a kick would have been good from, based on its velocity, trajectory, and apex. Commentary and statistics are necessary in filling the idle time in between plays for viewers, thus these features are only the beginning of what could become a complete revamp of broadcasting techniques by the NFL’s partners, changing the way fans can view the game.

Teams, coaches, and players may be among those who actually benefit the most from Next Gen Stats. After each game, teams receive a collection of their offensive data and analytical tools, which they can then use to to train better and smarter for their upcoming games. Several teams have even hired their own data scientists to make the best use of the Next Gen Stats and data they receive. As of right now, the patterns and data of opponents is not yet available to teams, but it may be in the future, which in turn can completely revolutionize  “watching film” and how teams analyse their opponents’ strategies. In addition, player data can provide important feedback to new rule implementation and injury protocols, making the game safer.

NFL fans now also have access to metric charts, videos, and photo essays that can all be found on the NFL’s Next Gen website. Passionate fans now have the ability to really learn what separates their favorite players from the rest of the NFL and have a quantitative understanding of what makes them great football players. One of the more common uses of these stats is for player comparison, which is a significant impact that Next Gen Stats has on fantasy football. Fantasy football is a major contributor in why so many people are greatly invested in the NFL, because it allows them to compete with others, whether for money or not, while watching the most popular sport in America. Metrics that measure efficiency, consistency, speed or spacing can provide fantasy players with an advantage in how they make their fantasy decisions, while graphic charts can provide a visual sense of how effective certain players are at their respective positions.

Passionate fans now have the ability to really learn what separates their favorite players from the rest of the NFL and have a quantitative understanding of what makes them great football players.

Next Gen Stats are only just beginning to be integrated into the NFL. It will be interesting to see how they evolve and take greater precedence in the Super Bowl, and by the beginning of the next season.

On Sunday October 1, over forty members of McGill’s Think Pink club gathered at the 21st annual CIBC Run for…