Nightfall with Edgar Allen Poe is Players’ Theatre first production of the year. Nightfall is written by Eric Koble, and directed by Kenzia Dalie.

Nightfall is a theatrical collection of Poe’s four most famous short stories: “The Raven,” “The Fall of the House of Usher,” “The Pit and the Pendulum,” and “The Tell-Tale Heart.” Poe (Luke Horton) himself alternates between telling and starring in his own stories. The play begins with Poe addressing the audience, declaring that he is not mad and imploring us to “be his judge.” While each story acts as a stand-alone piece, the overall point of the play is for the audience to delve into Poe’s mind and explore the themes of paranoia, fear, and of course, madness.

For those unfamiliar with Poe, he is an author best known for his short stories which revolve around horror, death and madness. He often employs an unnamed narrator, who usually suffers from paranoia and fear, which send him on a downward spiral into madness, to tell his tales in first person. In Nightfall, that narrator is Poe himself, and the descent into madness is his own.

The blessing and the curse of short stories is their length. There is no time for giving context, exploring characters’ backgrounds, or drawing out a beginning, middle, or end. Often, there is no tidy, satisfying conclusion. Short stories are meant to plunge their audiences into a moment and force them to live that moment intensely, as a picture rather than a movie. This is exactly what Poe and Nightfall do. Each story is intended to invoke feeling (most often horror and despair), rather than to “tell a story” in the traditional sense. Nightfall is not easy-going entertainment. While there are some comedic moments, this is a play that is meant to be taken seriously. Be prepared to filter through old language and complex narrative structure to fully absorb Nightfall in all its glory.

This is not an easy script to bring to life, but the cast does a fantastic job. With horror, directors often have to make the decision between over-the-top intensity or subtler, more realistic acting. Nightfall is the latter, and the actors are consistent across the board. Horton’s performance doesn’t just deliver during dialogue, his role is conveyed through body language just as thoroughly as with words. Horton’s Poe is not maniacal or joker-esque, his madness is conveyed much more quietly, and as such, much more chillingly. “The Tell-Tale Heart” is the highlight of the show, where Horton fully transforms into a convincing madman and thoroughly conveys Poe’s paranoia and insanity. 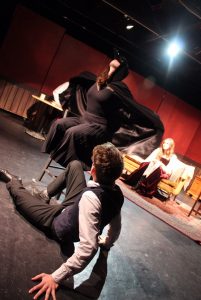 Roderick (Oliver Epstein) and Edgar (Matthew Milton) are also an excellent duo in “The Fall of the House of Usher,” a standout in the series which feels more “whole” than other scenes, and includes some much-appreciated comedy. Esme Thompson’s Madeline is also strong here, and brings a lot while doing very little. Sante (Stanley Myers O’Mulloy) faces the most difficult acting challenge in “The Pit and the Pendulum”, but delivers convincingly. This story features O’Mulloy alone on stage, with Horton narrating from the sidelines, a choice which makes the scene feel a bit more disjointed than the others.

The set design is also incredibly well done, and highly consistent. Players’ is transformed into a Gothic sitting room, decked in rust and scarlet tones which add to the dark and creepy mood. There was clear attention to detail in creating ambience by set designer Sarah Alevy. Allie McGowan’s costumes are also realistic and suited to the era and themes. Especially commendable is Horton’s makeup job, which makes him look eerily inhuman. Together, Nightfall’s design theme makes Players’ a haunted house to set the scene for Poe’s stories.

Director Kenzia Dalie was initially attracted to Nightfall due to her love of Edgar Allen Poe. The script is a near word-for-word adaptation of stories, which Dalie saw as “the perfect opportunity to bring his stories to life, literally from ‘page to stage.’” Dalie states that her primary goal was to “invoke emotion, but also to convey the idea of fear, and what fear does to people… it can be very dangerous.” When asked about her personal beliefs on Poe’s mental state, Dalie laughingly states that she believes he was indeed mad, but says that she wants the audience to draw their own conclusion.

Truly though, Nightfall has more value as an immersive theatrical experience than a psychoanalysis of Poe. At its (tell-tale) heart, it seeks to make the audience feel rather than think or analyze, in the same way that Poe’s short stories do. My advice to theatre-goers is to watch Nightfall for the ambience and the experience, and not to worry too much about whether or not Poe was mad. Ponder this question too deeply, and you might end up going mad yourself.

Nightfall with Edgar Allen Poe is on from October 18-21 and 25-28 at Players’ Theatre (SSMU Third Floor). Tickets are $6 for students and $10 general admission.

Première Moisson has replaced Tim Hortons in the Redpath Library. The switch is part of Student Housing and Hospitality…