In an email to the McGill community on May 16, Principal Fortier announced the release of a report by the Principal’s Task Force on Inclusion and Respect in Campus Life. The report outlines five key areas that require specific attention (Mission, Trust, Governance, Communication, Space), and 24 “specific action items” to create a more respectful and inclusive environment.

The following are some of the report’s key takeaways:

The Data collection methods were extremely varied: from disseminating a university-wide survey to hosting an open forum and observing focus groups. The task force received 18 letters from various campus groups commenting on the state of respect and inclusion. They held meetings and seminars at both the downtown and MacDonald campuses, including visits to  student residences and Thomson house, and heard from students, professors, and staff members alike.

The recommendations for improvements in the area of Mission call for uniformity between the university’s five established core values (academic freedom, integrity, responsibility, equity, and inclusiveness) and their policies and practices. One example mentioned was that “while significant advances have been made over the past few years to support students with physical disabilities and mental illness, we heard frustration from MUNACA that similar support structures do not exist for staff.”

The Task Force’s mandate is independent of claims of anti-semitism arising from the October 27th GA.

The Task Force differentiated themselves and their goals from that of Professor Spencer Boudreau, who released a report in February concluding that anti-Semitism was not a factor in the dismissal of a Jewish student representative from the SSMU Board of Directors. 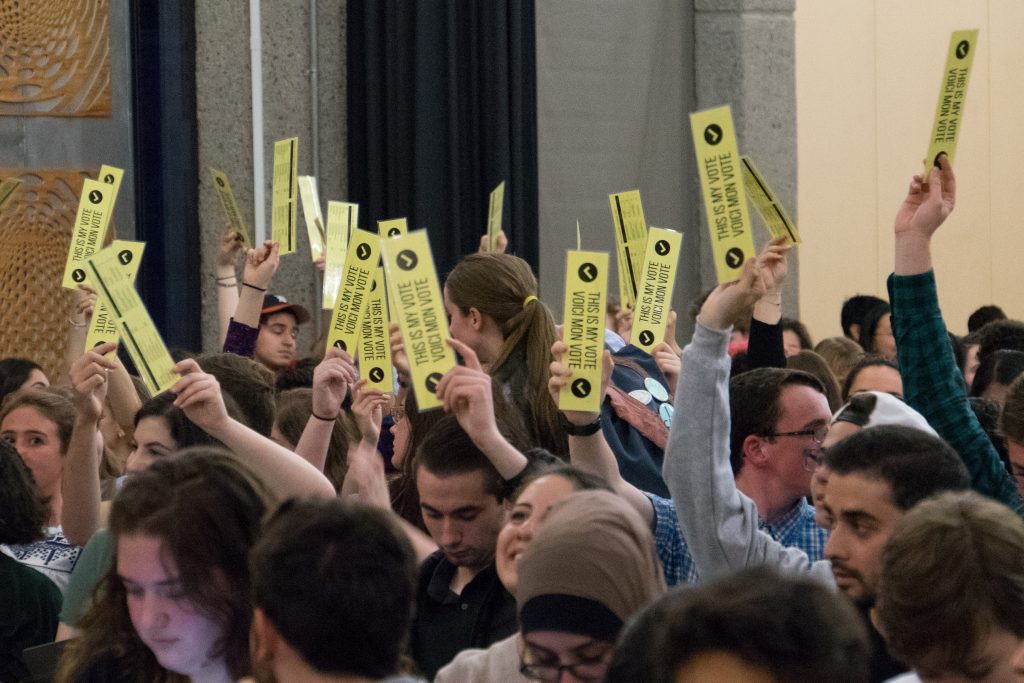 On page 4, they clearly state: “The Task Force mandate is independent of the investigation that was undertaken by Professor Boudreau into allegations of anti-Semitism arising from the SSMU General Assembly on 23 October 2017.”

Later, they go on to say that this event and the subsequent reaction are all a part of the bigger picture: “While we are not mandated to look into this incident in particular, it serves as one of many examples where the principles of respect and inclusion can be tested in the life of the University, and in the lives of the individuals who constitute the McGill community.”

A large portion of the McGill community doesn’t feel comfortable expressing their views for fear of being chastised by colleagues.

Page 11 of the report says: “We were struck by the survey results, albeit from a limited sample, that indicated that, while some members of the community felt that they needed to restrict expression on the basis of personal identity, a significant number felt that they had to be careful about expressing their views on the basis that they might be denounced by their colleagues (39.3% were “very” or “extremely” concerned).”

Peer Education programs may do more harm than good.

In the process of data collection, many students commented on the implementation of Rez Project and Race Project and how they were affected. In page 12 of the report, it is written: “our understanding is that the workshops were devised without sufficient consideration of how the implementation could harm instead of [improve] the student experience…Most of the survey respondents who mentioned the programme indicated that it imposed a very specific worldview, with facilitators dismissing contrary views as ignorant, thereby making those with differing views feel uncomfortable, excluded, and, perhaps not surprisingly, resentful.”

The report goes on to recommend seeking expert advice, stating: “For example, while peer-to-peer training may be particularly effective in some circumstances, this is an area that requires expert facilitation.”

There is a lack of trust between the community and governing bodies.

Theme two, Trust, identified that members of the McGill community “expressed the view that the senior administration is both physically isolated and out of touch with the needs of the University community.”

As an example, they refer to the Open Letter released by SSMU in April 2018 condemning the university’s lack of action towards abusive relationships between professors and students, stating: “[This situation] demonstrated that many feel that the only way to address issues of sexual misconduct and harassment is through external channels. In contrast, in the course of our consultations we met with members of the senior administration and several resource people who, in our view, demonstrated a strong, credible commitment to addressing the underlying issues. However, despite their commitment, and concrete efforts by the University, there is clear, and public, evidence of a trust deficit.”

Further, the task force’s university-wide survey highlighted students’ distrust in SSMU. The report attributed this, at least in part, to the October 2017 GA, stating “[This event has] left many students feeling that student government is driven by personal agendas and internal dissent and motivated by factors completely unrelated to the mandate of student government itself.”

The report later highlighted that this event influenced the community’s belief that the university is selective in which issues are deemed important enough to investigate: “While a number of respondents took issue with the particular position taken, many others were left to speculate as to why the University had spoken up on this issue, while it had remained silent on many others.”

The report went on to say that members of the community felt that in times of conflict, the administration often chooses to do what’s safe as opposed to what’s right, sometimes choosing silence. “At times when the community could reasonably expect to hear from the University leadership, failing to communicate can, in itself, be damaging.”

The data also showed that McGill staff members have low trust in their managers. The report claims that “despite their experience and expertise, administrative and support staff frequently feel undervalued and excluded from meaningful decision-making.”

Lastly, it is noted that some administrators have “lost trust in student leaders, who they feel are unduly oppositional and unwilling to compromise.” The report points to topics like implementing a Fall Reading Week, which administrators claim have “become emblematic of dysfunctional conversations.”

Incoming Senators face a steep learning curve and an information gap between past and current proposals.

The task force found that the short length terms (which are one year in duration) served by Student Senators lessen some administrators’ willingness to navigate these issues alongside these student leaders. They wrote: “We have observed that returning to the same issues year-by-year lessens the willingness of University leadership to engage with student leaders on these issues in meaningful ways. We learned that students sometimes make the same proposals or revisit the same issues unaware that these had already been raised and responded to in the past.”

In their recommendations, they go on to suggest “establishing formal training for Student Senators to equip them to engage meaningfully in the workings of Senate and University governance as a whole” as a way to help familiarize Senators with best practices, as well as issues that have already been visited and resolved.

The report recommends the appointment of an “Institutional Spokesperson”.

The task force recommends the appointment of an Institutional Spokesperson who would be involved in disseminating a new communications strategy that more closely resembles the university’s core values and mission statement. They believe this new position would benefit the McGill community as well as the external one by providing a familiar face for communication interactions.

There is an urgent need for more accessible communal spaces.

Members of the McGill Community vocalized their desire for more accessible communal spaces, including amenities like gender-neutral washrooms and structural modifications, to make campus more physically accessible. Further, an urgent need for the creation of a Muslim prayer space was identified, and the task force clarified that it is well within McGill’s duties to provide it: “[McGill] can be secular and inclusive. Providing a space for community members to express their religion and spirituality is not inconsistent with McGill’s commitment to remaining a secular institution.”

They further recommend that McGill should increase the amount of gathering space to combat loneliness in the community.

It’s hard to log onto Gwyneth Paltrow’s Goop website and not want to make fun of it. For those…