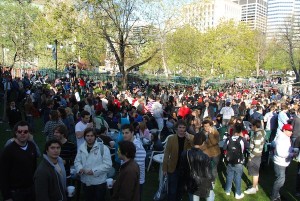 Students have been calling it the “Happiest Place on Earth” since 1982, and it might very well be. For the last two weeks of summer and one weekend every spring, students flock to McGill’s Lower Field in absurd numbers searching for live music, cheap beer and delicious burgers at the EUS’ annual, Open Air Pub. To be precise, this year’s OAP had McGill students buying a beer every 4.57 seconds and devouring almost seven cows.

OAP has long been a McGill summertime staple, but its continued popularity also gives rise to challenges of its own. “As you may have seen, OAP gets full to capacity quickly on busy days with line-ups all the way up to the Arts building,” acknowledged EUS VP Finance Zach Oman. “We want to be able to grow but still provide the same atmosphere, while giving student bands a place to perform for the McGill community.”

The size of OAP brings along with it some security risks, such as students hopping the fence, which need to be addressed. In order to do so, the EUS has had to work very closely with the school itself. “OAP has great relations with McGill Security and McGill Grounds,” Oman noted. “We meet with them regularly to discuss our plans and ensure a safe environment for all patrons of OAP.”

Luckily, there were no major incidents, but a few “interesting situations” popped up over the course of OAP. “On the first day, we had a delivery of over 1500 cases of beer,” Oman recounted. “We were a little short-staffed to be able to move that much beer at once, so our volunteers worked really hard to move them into storage and had to open late, around 1:30pm. At least it was just the first day and following beer deliveries were done in smaller orders.”

Speaking of beer, there were a few small changes to this year’s selection, most notably the addition of Smirnoff Lemonade coolers. “Sleeman [the beer provider for most student faculties on campus], was purchased by Sapporo a few years,” explained Oman. “As such, we have the option to order any beers offered by them, as well as through some of their affiliates, such as Guinness. Smirnoff recently obtained an affiliation with Guinness, which is part of Sleeman, giving us the lemonade option.”

The last day of OAP also saw students eating about four “regular” days’ worth of food, when only the supply for two or three days was budgeted for. This resulted in an emergency last minute bun-run that thankfully left no burger bare.

While OAP is fun and full of debauchery, the EUS has also sought to give it some heart. “At our OAP Lite, all proceeds go to the PCCC (President’s Choice Children’s Charity),” Oman beamed. “It was the first such charity in Canada, and one of the few where every dollar donated goes straight to the programs they run and recipients; all administrative costs are covered by the Weston family.”

Why the PCCC? The reason is simple. “Our partnership with President’s Choice began at least four years ago, when we would go to Provigo du Parc for food orders,” Oman explains.

The last OAP Lite saw record profits as well, and on Thursday, September 5th the EUS presented the President’s Choice Children’s Charity with a cheque of $25,000. This is significantly more than the last three years, where $15,000, $17,000 and $12,000 were raised respectively.

OAP has cemented itself as the EUS’ main contribution to campus life. “We run OAP now to provide a watering hole for students and staff, as well as a venue for great student bands to showcase their talent,” Oman enthused. “It is and always has been an event managed and operated by volunteers:  it’s an event by students for students, and all the funds from OAP go to support EUS activities such as our competitive design teams like Electric SAE, Mini-Baja and Concrete Canoe, engineering clubs, social and academic EUS events… everything.”

I’m not a fan of early 20th century avant-garde art. Blasphemy, I know. I’m not saying I see no value…