Throughout the year, a number of SSMU referenda come up for a vote. Many of them are relatively inconsequential, or at least quite uncontroversial. However, the referendum currently up for a vote is not like most. Today, I am writing to urge you to vote “NO” on the QPIRG referendum. QPIRG (Quebec Public Interest Research Group) currently receives funding through an opt-out fee levied on all students. However, its activities and programming call into question the deservedness of this funding mechanism. SSMU should not be directing automatic student fees towards this radical, divisive group.

As a preface, some of QPIRG’s activities are positive contributions to McGill. Many of their speakers provide important perspectives on disadvantaged communities and oppressed groups. Moreover, QPIRG occasionally raises funds for objectively positive causes, like human rights abroad. These activities provide a positive interface between McGill and the global community. As such, I am of the opinion that QPIRG should continue to exist, but solely supported by its own efforts. Its operations ought to be self-sufficient. If the student body truly values QPIRG, it should end its automatic funding scheme and instead move to either a donation-based or opt-in fee. Some have raised concerns over the impact of a NO-vote on McGill’s open environment. However, voting NO on this referendum will not harm equality on campus, as the SSMU Equity Fund and other reasonable justice groups will go untouched. In fact, it will improve equality on campus.

Through the current funding mechanism system, QPIRG receives a large amount of financial favouritism over other political clubs. No other political advocacy group on campus receives the amount of money that QPIRG does, much of which comes from students who don’t know what they are funding. The status quo effectively disadvantages McGill’s other political groups while QPIRG maintains an edge, justified by a humorously false guise of ‘non-partisanship.’ How is it fair that a radical-leftist organization with explicitly political goals receives favouritism over other more mainstream political clubs? Why aren’t centre-left, centrist, and conservative student groups getting the same kind of material support as QPIRG?

No other political advocacy group on campus receives the amount of money that QPIRG does, much of which comes from students who don’t know what they are funding.

That runs contrary to the purpose of open dialogue, which is the bedrock of a university climate conducive to open-minded learning. Blatant disregard for the free exchange of ideas dismantles McGill’s standing as a top-tier institution. Already, SSMU’s policies and practices receive F and D grades respectively on the Campus Freedom Index. We shouldn’t stand for this disgraceful affront to liberty. Student government ought to promote a level playing field by ensuring that their funding mechanisms do not favour any specific political ideology. Continued favouritism towards QPIRG will turn McGill into a left-wing echo chamber, which even for those of us on the left is an unwanted reality. I want to attend a university where all reasonable perspectives are expressed on an equal playing field.

Furthermore, the continuing devolution of this campus into radicalism has led to worrisome rhetoric from some. A few weeks ago, somebody tried to convince me that China’s Cultural Revolution was an example of anti-capitalist ideology improving living standards. Really? The systemic genocide of 45 million people improved quality of life simply because it wasn’t capitalism? The clear bias demonstrated toward extreme anti-capitalist views on campus is leading some to reject facts and advocate preposterous claims. This is the kind of absurd rhetoric QPIRG’s current favourable treatment feeds.

Aside from the points on fairness and freedom, QPIRG’s agenda is so radical and divisive that it does not merit opt-out fee funding. The radical ideas are on display for all to see. Just take a look at the Rad Frosh programming. Rad Frosh, provided as an alternative to faculty orientation activities, receives funding from undergrad fees. Some of this year’s more divisive activities include workshops closed off to people based on race, trainings on how to promote anarchy, glorification of sabotage against developers in emerging neighbourhoods, anti-capitalist propaganda, workshops on Boycott Divestment Sanctions (BDS), and support for abolishing the entire criminal justice system as we know it.

Moreover, QPIRG partners with radical activists who support removing Hezbollah, which frequently carries out attacks on unarmed civilians, from the list of known terrorist organizations. A look at their organizational report from 2014-2015 reveals that QPIRG supported Demilitarize McGill’s protesting of Remembrance Day, due to the “hyper-nationalism” of the ceremony. This group sickeningly disrespects human rights abroad as well as the veterans who bravely served Canada.

Its Facebook page promotes groups linked with open border policies, which I, as the grandson and son of immigrants, and an immigrant myself, recognize would do serious damage to Canada’s economy. I can’t be the only one who believes that student fees shouldn’t be funding the promotion of lawlessness, division, and economic ideas that run contrary to fostering an open and free academic environment.

Luckily, BDS activists have been shut down multiple times, most recently by a landslide 14-point margin. The Judicial Board found BDS unconstitutional based on SSMU’s guiding document. Additionally, a body of literature exists which shows that BDS policies unjustly isolate Israel, fail to promote the peace process, and fuel anti-Semitic attacks on campus. With continuing attacks on Jewish students, why is an organization so committed to ‘justice’ endorsing policies that fuel hatred? Any organization purportedly focused on equality should actively denounce policies like BDS. The fact that fees levied on every student fund this extremism tarnishes McGill’s social fabric and reputation, and insults those who these policies endanger. QPIRG’s support for BDS relates directly to another reason why I urge a vote against this referendum. 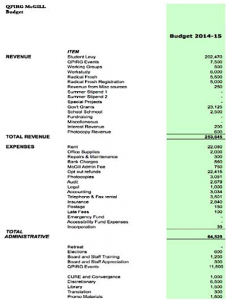 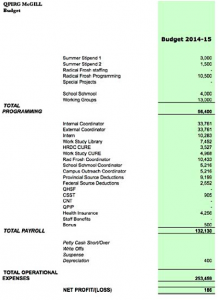 A look at QPIRG’s finances shows a high degree of wasteful spending. First, some of the spending going towards programming is ludicrous. QPIRG works with other on campus groups to put on events like “Palestine is a Queer Issue,” despite the weak linkage between these issues. QPIRG also spent $100 on helping to create a colouring book, $50 on “herbal care packages,” and $175 on a book launch. Student funds are being misdirected to random projects that fail to promote productive discourse or positive change. In addition, QPIRG’s financial information reveals stunningly high overhead costs. One would expect that elections could be conducted relatively cheaply. However, QPIRG managed to blow $600 on elections. The organization’s top brass (two employees) earn nearly $35,000 each while positions as small as “Rad Frosh Coordinator” and “Intern” earn in excess of $10,000. McGill’s faculty frosh coordinators and student interns only wish they could earn that much! However, because QPIRG is given a funded mandate from the student body, they appropriate money towards wasteful ends. QPIRG spends over $125,000 yearly on staffing expenses, while they employ a relatively small number of students. This referendum is an opportunity to send a message about financial responsibility, and to hold QPIRG accountable for its waste. 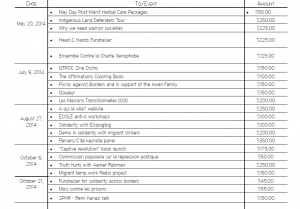 Leftist groups are an important part of the political dialogue meant to be fostered on university campuses. I fundamentally disagree with the far-left, but to deny them a voice would run contrary to the principles I cherish. The status quo, however, denies an equal voice to student groups promoting different, non-rad perspectives.

Why do we keep throwing students’ money at an organization that wastes it while promoting radical and divisive views? QPIRG does not deserve special treatment or favouritism from the student body. I vehemently oppose the idea of continuing the opt-out fee for QPIRG and hope you join me in voting NO on the upcoming referendum. It is imperative that we achieve an open exchange of ideas on campus by ending the unfair handout to QPIRG, who continue to promote the delusion that their activities have anything to do with the ‘Public Interest.’