Players’ Theatre is proud to present their first production of the new year, Rhinoceros by Eugene Ionesco, directed by Guy Ettlin.

One day, the peace of an idyllic French town in shattered by the arrival of a rhinoceros. At first, the reactions of the eccentric townspeople is shock, awe, and fear. In the midst of their comedic antics, however, the arrival of the rhinoceros seems little more than a bit of excitement to break up the monotony. But soon, more and more rhinoceroses arrive. The townspeople, once afraid and disgusted, slowly but surely choose to join the animals and become rhinoceroses themselves. The characters introduced to us as charmingly bizarre humans begin to willingly give up their humanity to join the ever-growing majority of rhinoceroses. In the end, only one of the original characters, Berenger (Emily Sheeran) is left human, and battles with the choice between joining the masses or retaining his humanity. Does this play seem absurdist? Strange? Not to be taken seriously? Try replacing “rhinoceros” with “Nazi.” 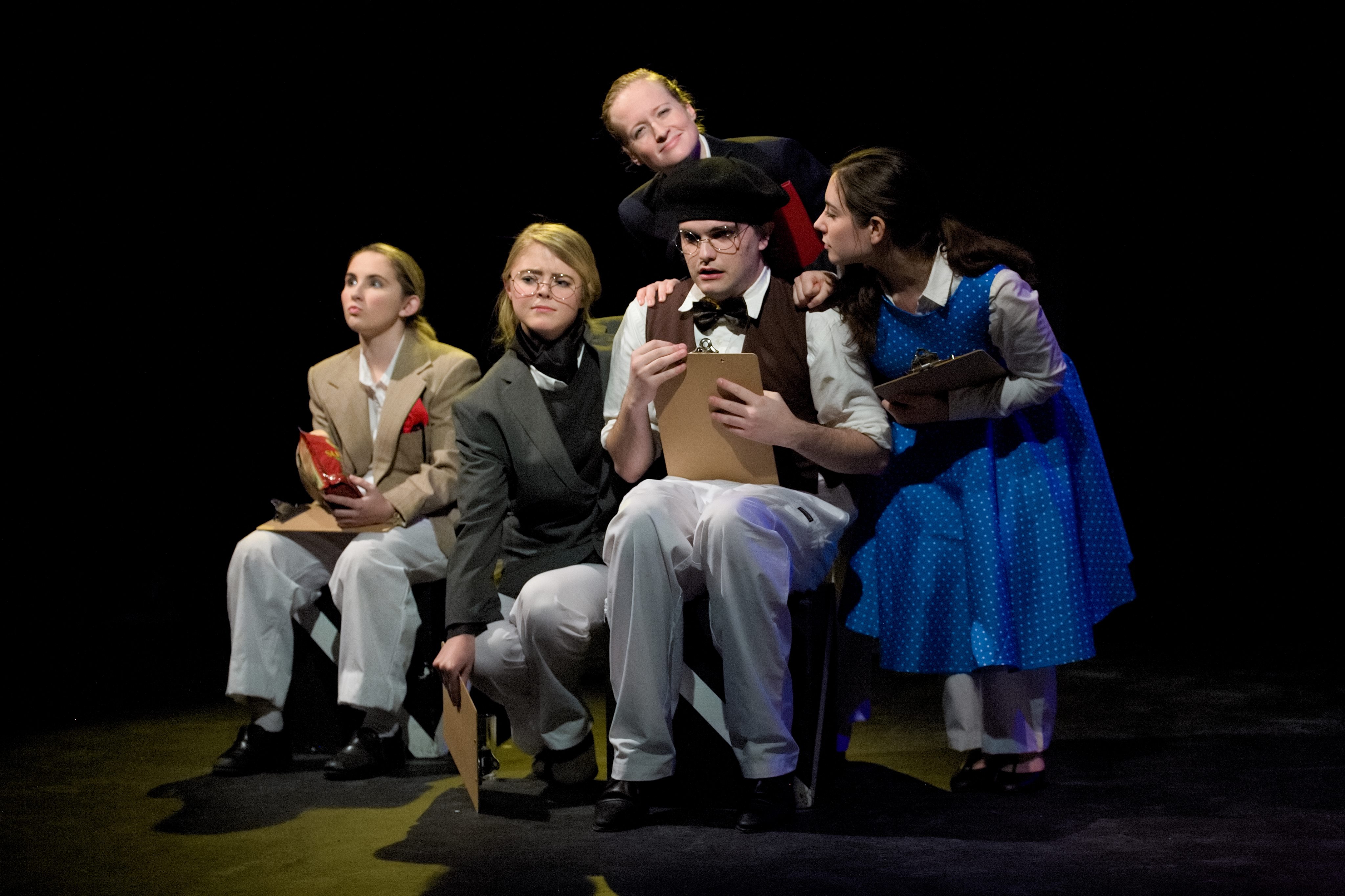 Ionesco’s Rhinoceros was written in 1959 as a commentary on the rise of fascism and National-Socialism during WWII. The play explores the ease and speed at which ideas that literally strip people of their humanity can overtake society. At first, the idea of a rhinoceros in town is so preposterous that many doubt its existence as a rumour. Those that saw it first-hand react with derision and disgust at the savagery of the animal; it seems to have no goal but to destroy the town and trample all in its path. Slowly but surely, minds start to change. What was once considered horrific becomes beautiful, seductive, and the ideal mode of existence. The characters with the strongest dislike for the beasts are the first to become them, including Jean (Steven Finley), Dudard (Liana Brooks) and Daisy (Hope Kelley), demonstrating that even the best and brightest of us are vulnerable to falling. The audience can only watch with growing horror as the characters that we thought were impervious to the epidemic succumb to it. 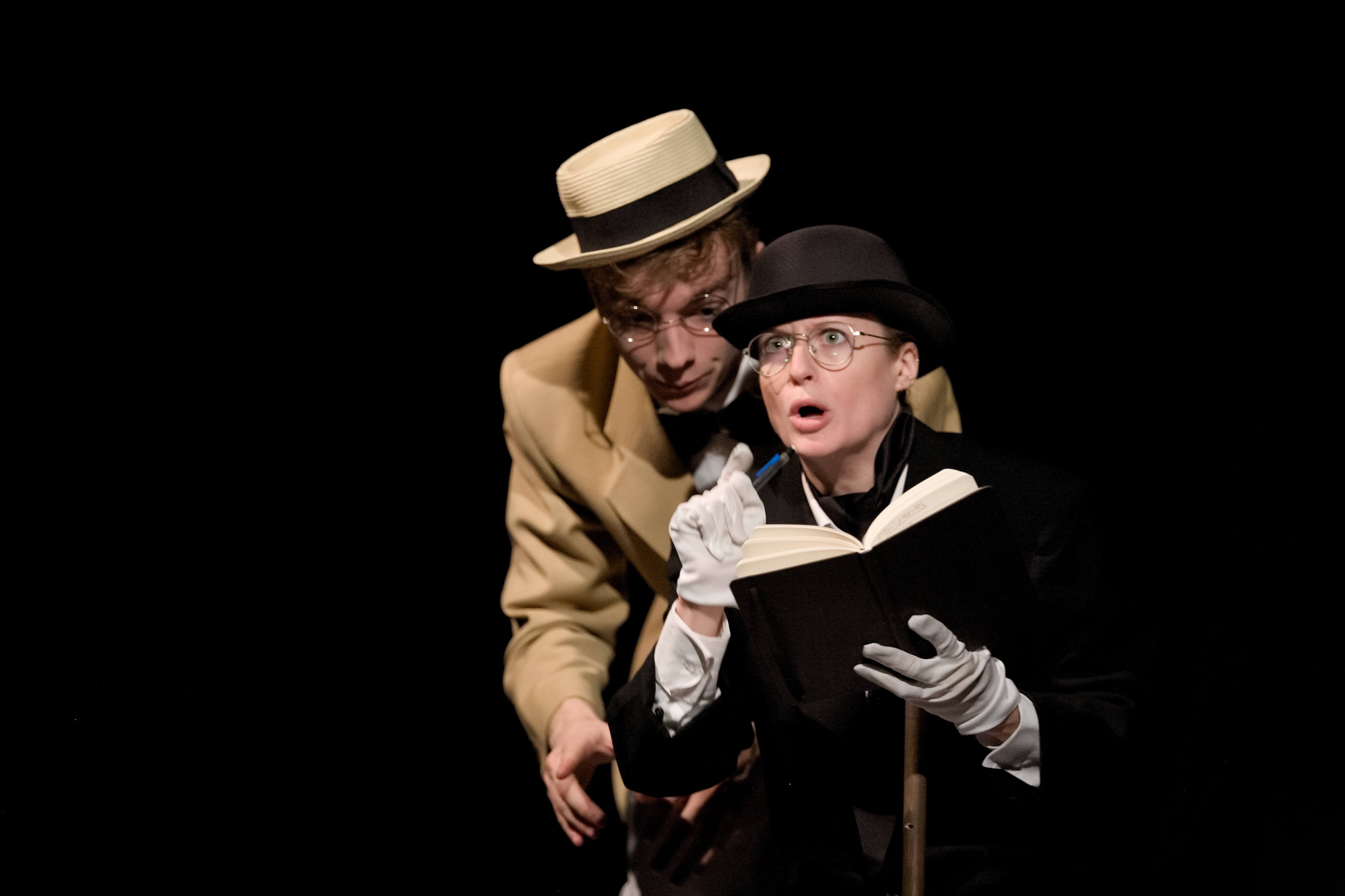 Olivier Bishop-Mercier, left, and Georgia Pearson, right, as the Logician and the Old Man. Photo Courtesy of Gaspard Nahmias.

The first act is light, comedic, and at times outlandish; the second is dark, serious, and frankly scary. This night-and-day contrast cleverly reinforces the themes of the play. In the beginning, we are lulled into believing there is nothing serious or important going on, absorbed only by the silliness of the characters. In fact, we’re falling into the same trap of complacency as they are, and we fail to see the underlying horrors until the last few scenes. It’s a brilliant directorial choice by Ettlin, who stated that the original version is meant to be serious throughout. By setting up the Acts this way, the story and its message are delivered all the more powerfully. However, while entertaining, it’s a little long before the actual plot starts to come together and a little too easy to get lost in. Audience-goers might find themselves wondering what the “point” of the first half is, although it becomes apparent eventually.

The striking transition from light to dark takes a seriously talented cast to pull off. Ettlin stated that in his casting he was looking for versatility; actors had to be able to play both sides. The Old Man (Georgia Pearson) and the Logician (Olivier Bishop-Mercier) were particularly funny in their roles. Finley and Brooks were tasked with the greatest challenge: they transformed into rhinoceroses on-stage and skillfully executed the transition in their body language, tone, and facial expressions. Finley’s transformation is especially well-done, as he portrays his descent into beast-hood in a way that avoids being over-the-top or cheesy. 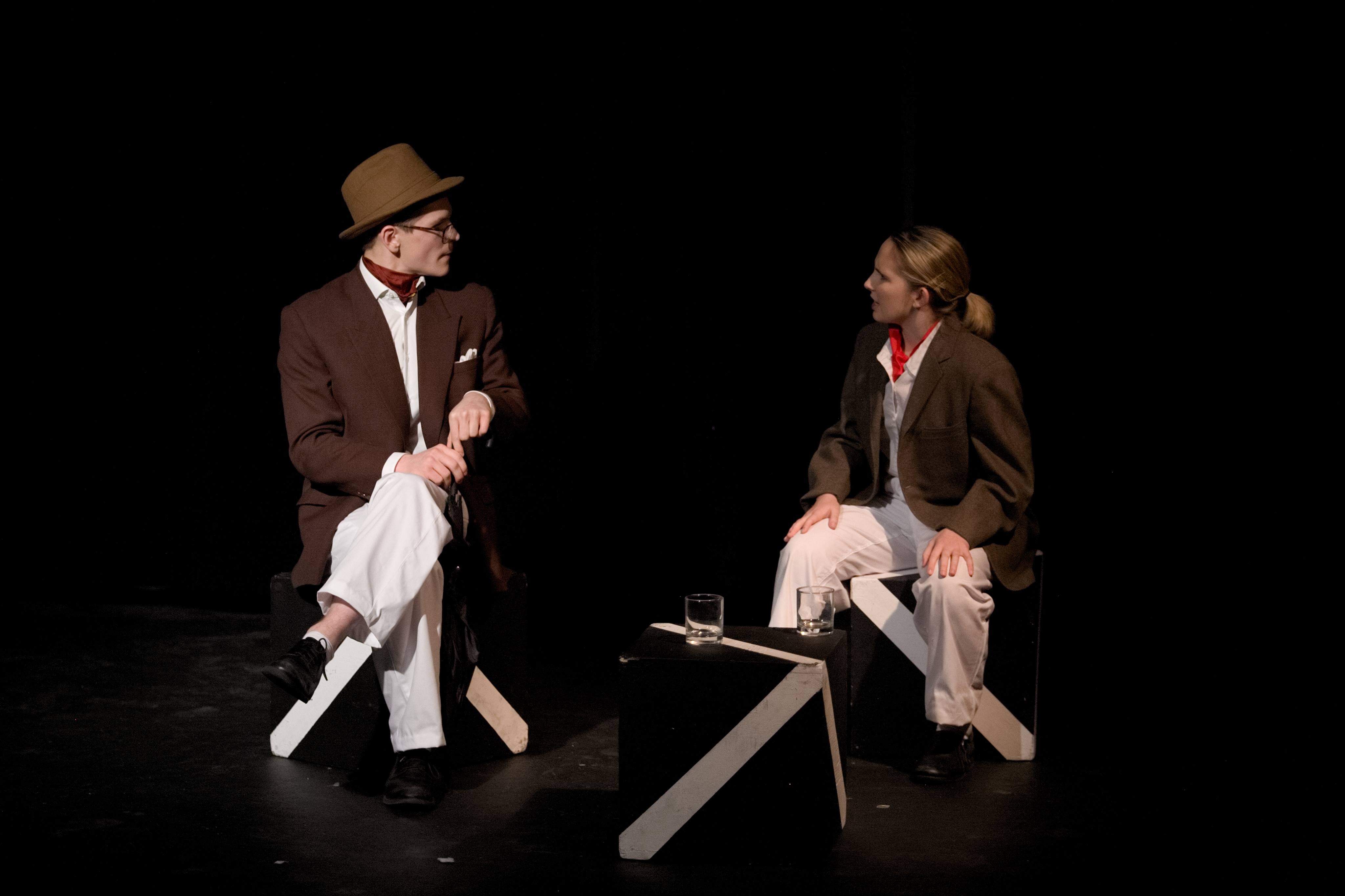 The staging of his final transformation is excellent and tasteful. The same tasteful restraint is present in the rest of the cast’s performance as animals, which never cross the line into ridiculous or laughable. Of course, Sheeran’s performance as Berenger must be commended. She perfectly captures the spirit of humanity in Berenger, our imperfect hero, and each of his emotional stages: innocence, growing fear and paranoia, near-temptation, and finally, fierce resistance. While long monologues and conversations between characters are a bit hard to follow sometimes, especially in the first half where the dialogue is fast-paced and sometimes nonsensical, these performances are perfectly highlighted by the lighting (by Gaspard Nahmias), staging, and costumes (Jess Beyer) that amplify the dark mood of the show. 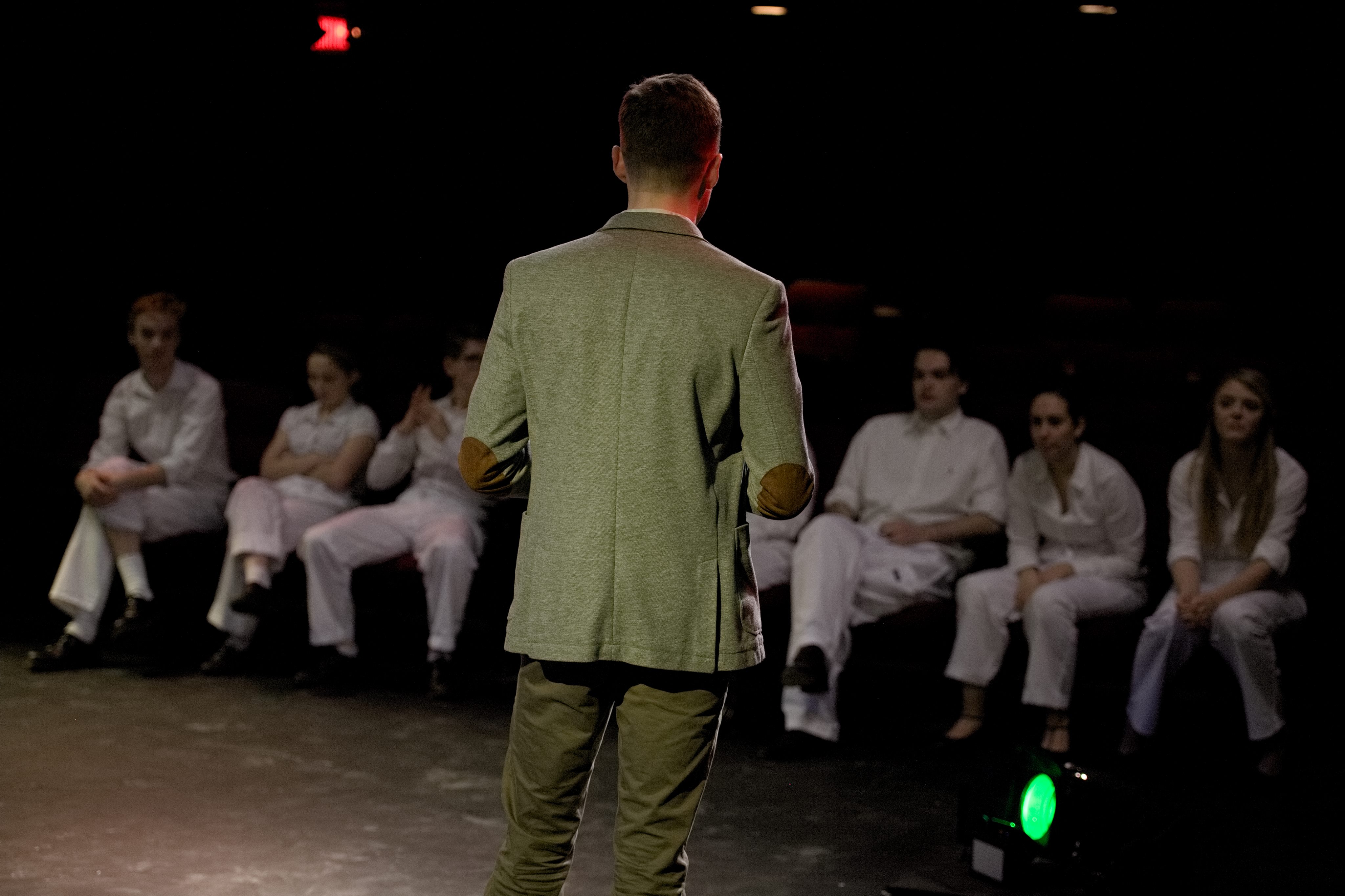 Director Guy Ettlin, front, and cast of Rhinoceros in the back. Photo Courtesy of Gaspard Nahmias.

Rhinoceros blends politics and comedy so seamlessly that the impact of its message doesn’t hit until the near final moments of the show. Ionescu’s social commentary has endless contemporary parallels; it’s easy to spot a rhinoceros or two in modern-day politics. Rhinoceros’ relevance will likely never fade completely, as humans are all too quick to fall into the same traps of conformity and hive-mind mentality time and time again. However, Berenger shows us that for every period where humanity is threatened by this phenomenon, resistance still lives. “I won’t give in,” he says, and neither should we.

Rhinoceros is on at Players’ Theatre from Wednesday, January 17th to Saturday, January 20th at 8pm, with a special matinee show on January 20th at 2pm. IMPORTANT: There will not be a second week of shows. Players’ Theatre is located at 3480 McTavish Street, on the 3rd floor of the SSMU Building. Tickets are $6 for students, and $10 general admission.

We’re all familiar with that implacable, but odd effect of disappearing into the internet; the productivity-related anxiety we have…