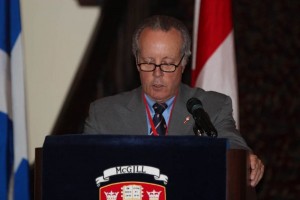 The Scarlet Key is among the most prestigious awards a McGill student can receive. In order to be recognized with this honour, a student or graduate must exhibit a high level of excellence not only in academics, but in student leadership. The application process entails a reflective analysis of how leadership and extracurriculars were weaved into their McGill experience.

On Thursday, students, professors and graduates gathered in the ballroom of McGill’s Faculty Club to honour some of these esteemed alumni at the annual Scarlet Key Leadership Conference. Held by the Scarlet Key Society, the conference serves as a means to connect students to past winners in order to inspire community involvement and achievement.

The Scarlet Key Society has been pinning students for the last 85 years. The award has an eclectic mix of winners, including former Canadian Ambassador to the UN Yves Fortier, former Canadian Justice Minister Irwin Cotler, and Much Music co-founder Moses Znaimer. Last year’s recipients even included the outgoing Principal of McGill University, Heather Munroe-Blum.

Dr. Crelinsten, a cardiologist and Associate Physician in Chief of the McGill University Health Centre, began the evening’s discussion by sharing his personal experiences with work-life balance.

“I live in a very fortunate environment. I work in an academic health care centre in which I have residents and fellows who are able to help me share my workload,” Crelinsten explained. “I can tell you that I had the opportunity to go to all of [my children’s] ballet, soccer, and hockey games.”

He also discussed the importance of reshaping stereotypical ideas of balance. “Work is not always the burden, and life is not always the oasis. There are ups and downs in both realms, and the concept that life is the healer of work’s trials and tribulations may not be accurate. Similarly, solace can be found in the comfort of work.”

Rabbi Grushcow is no stranger to hard work’s comforts. After studying political science at McGill, where she was also a Vice President in student government and campaigned for social causes, Grushcow was awarded the prestigious Rhodes Scholarship to study at Oxford. She went on to complete her doctorate in theology at Oxford and in 2003 became ordained as a rabbi. She currently serves as the Senior Rabbi for Montreal’s Reform Jewish community.

For Grushcow, the exposure to diverse worldviews she encountered at McGill allowed her to strengthen her own beliefs while gaining an understanding of her peers and their convictions.

“In retrospect, I’m glad I was exposed to people who believed something different than I did,” Gruschow asserted. “I think one of the challenges we have with social media is that we choose how we get our news and we choose who we hear from. I can go on Facebook and read ten articles a day that will affirm something that I already believe. But every now and then, a big issue comes up and I say to myself, ‘Why am I not seeing a single thing from someone who thinks differently?’ And so that’s something I’ve held on to, that notion of openness to difference, that our differences are something we should value.”

Boulanger, meanwhile, took time to list three tips she wished had been given to her as a student. “Build your personal brand while doing what you love, don’t underestimate the power of your network, and strengthen your financial and personal life in a way that allows you to tolerate high risk and have the freedom to live your dreams.”

For Boulanger, realizing her dreams took her from Montreal to Milan and everywhere in between. Once more in Montreal, she has started her own eyewear company, Bonlook, which she now runs alongside her brother.

However, nothing is certain in the world of business, especially when starting your own company, All entrepreneurs must learn to cope with the risk of professional disappointment, but Boulanger does not see this as a deterrent. “Failure is very taboo, and I think it shouldn’t be,” Boulanger explained. “My only plan B when I started Bonlook was to go bankrupt and then look for a job, because what I have, the experience I have now, nobody is ever going to take that away from me. I think you can’t really have a plan B. If you do, you’re not truly committed.”

The speeches were followed by a cocktail reception, where students were able to talk one-on-one with the speakers and gain insight into achieving their own personal goals during their time at McGill.

“I really feel this conference gives students like myself the opportunity to learn from the experiences of outstanding alumni and to be inspired by their passion towards their lives and jobs,” explained U0 management student Ashley Liu. “It helps us facilitate a closer emotional bond with the school.”

The Scarlet Key is handed out each year to several distinguished recipients who have demonstrated quality of leadership, selflessness, and perseverance through their outstanding contributions to the McGill community. Past recipients have made their mark in a variety of fields, including student government, social activism, and athletics.

“I learned, through my activities here at McGill, about courage, about strategy, about choosing your battles,” Grushcow reminisced. “I learned about figuring out what matters, and those lessons are things that I’ve always taken with me.”

Applications for the 2013-2014 awards are now open at http://aoc.mcgill.ca/network/montreal-alumni-groups/scarlet-key. All graduating McGill students are encouraged to apply.