“It is the most friendly vocation in the world,” he announced.

“A bookseller,” said Grandfather, “is the link between mind and mind, the feeder of the hungry, very often the binder up of wounds. There he sits, your bookseller, surrounded by a thousand minds all done up neatly in cardboard cases; beautiful minds, courageous minds, strong minds, wise minds, all sorts and conditions. And there come into him other minds, hungry for beauty, for knowledge, for truth, for love, and to the best of his ability he satisfies them all…Yes….It’s a great vocation.” 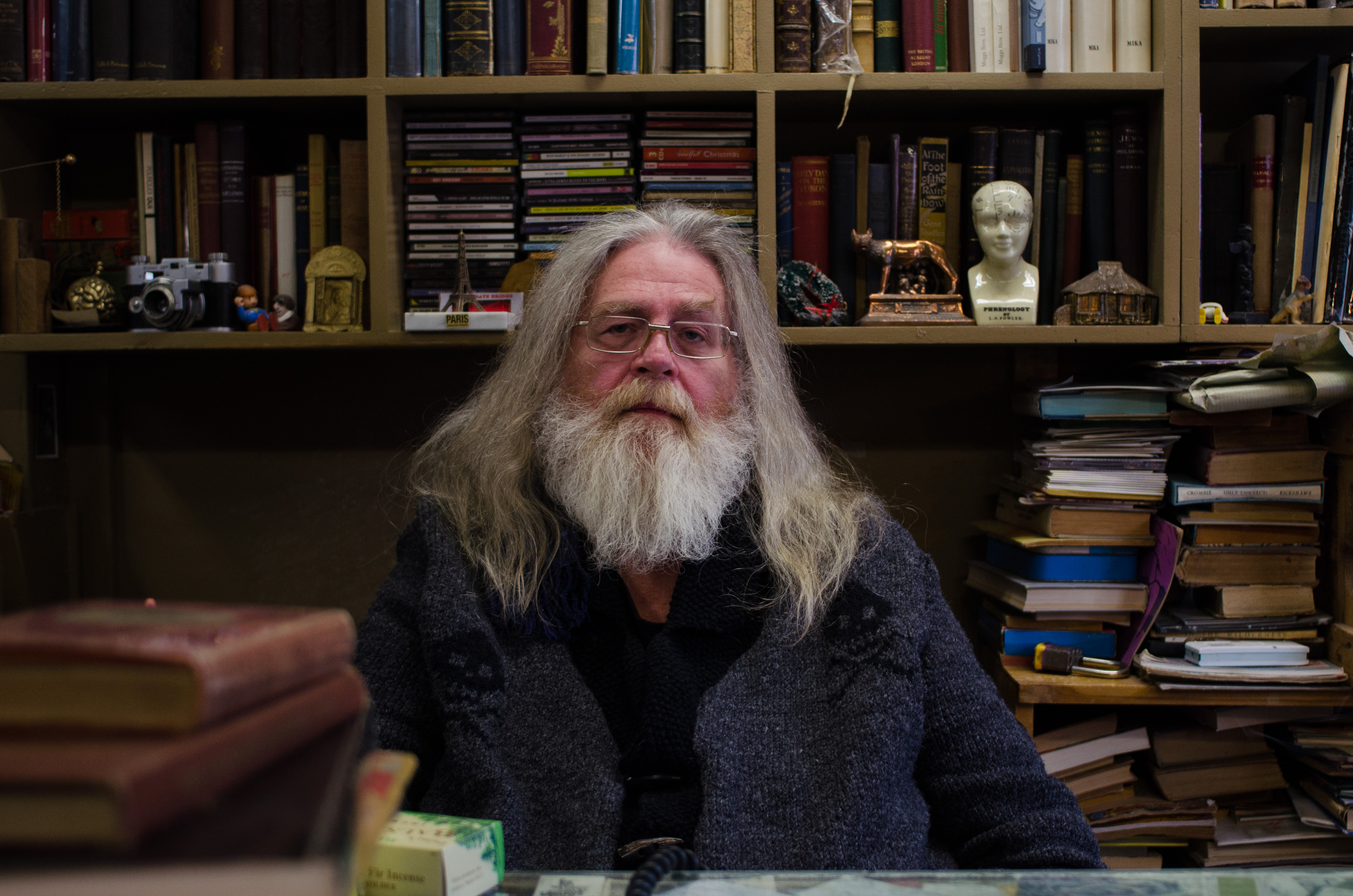 And Stephen Welch, who sits at the desk of his used bookstore in the Mile End of Montreal, S.W. Welch Bookseller, would seem to agree. “I have the greatest job in the world!” he claims. His store welcomes the reader with a room crowded with books and a black leather couch on which to enjoy them. The space is stamped with the character of its owner; his desk crowded with little figurines and knickknacks and the walls, where not hidden by shelves, sports posters of the Ramones, Star Trek, Full Metal Jacket. The selection of reading material is well-curated and like all good bookstores, invites the reader to spend more than a minute perusing the shelves in search of a good find. This is not too difficult here because, in Stephen’s own words, he does not sell “schlock.” 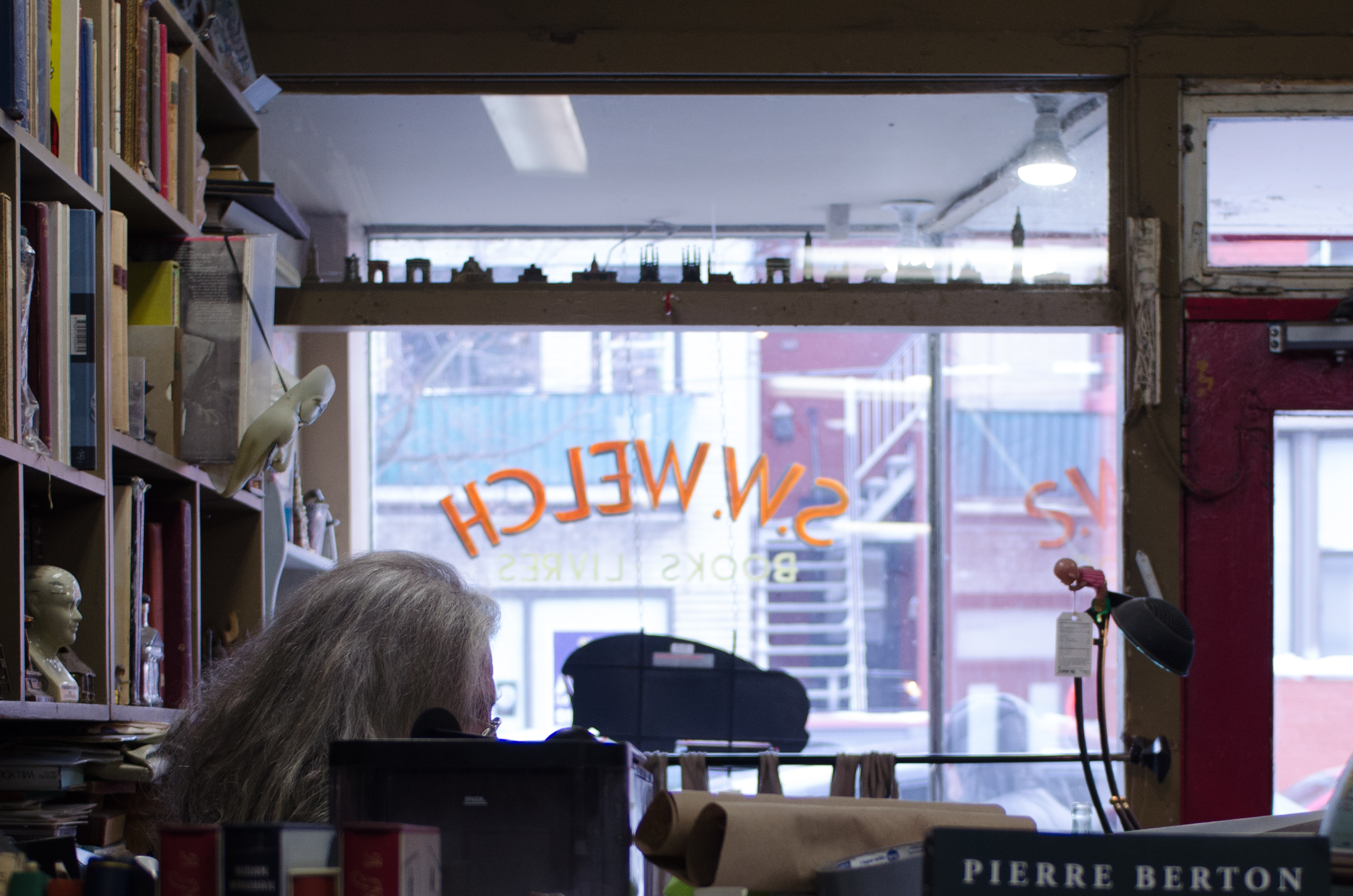 It is clear that Stephen is happy to be where he is. A committed lover of literature, he now has over thirty years of experience dealing in used and rare books and has acquired a profound knowledge of the business. Part of what attracts him is undoubtedly the intrigue. Stephen is excited by the uncertainty that lies in the unknown, for his is the job of a treasure hunter. The possibility of finding a jewel among the rough when called to look at a personal collection keeps him going. He is more than able and willing to talk for hours about book bindings, old printing techniques, and ‘points of issue’ with antiquarian bookmen. It is not difficult to share in his enthusiasm as he shares that his oldest book is from the 17th century and is a pocket version of a very famous Italian cooking book. That book is its own mystery, as he still has not yet been able to find any record of its existence, and yet, there it sits in his possession. At any rate, it is a pleasure to walk into a store whose atmosphere is so markedly affected by the enthusiasm of its owner. 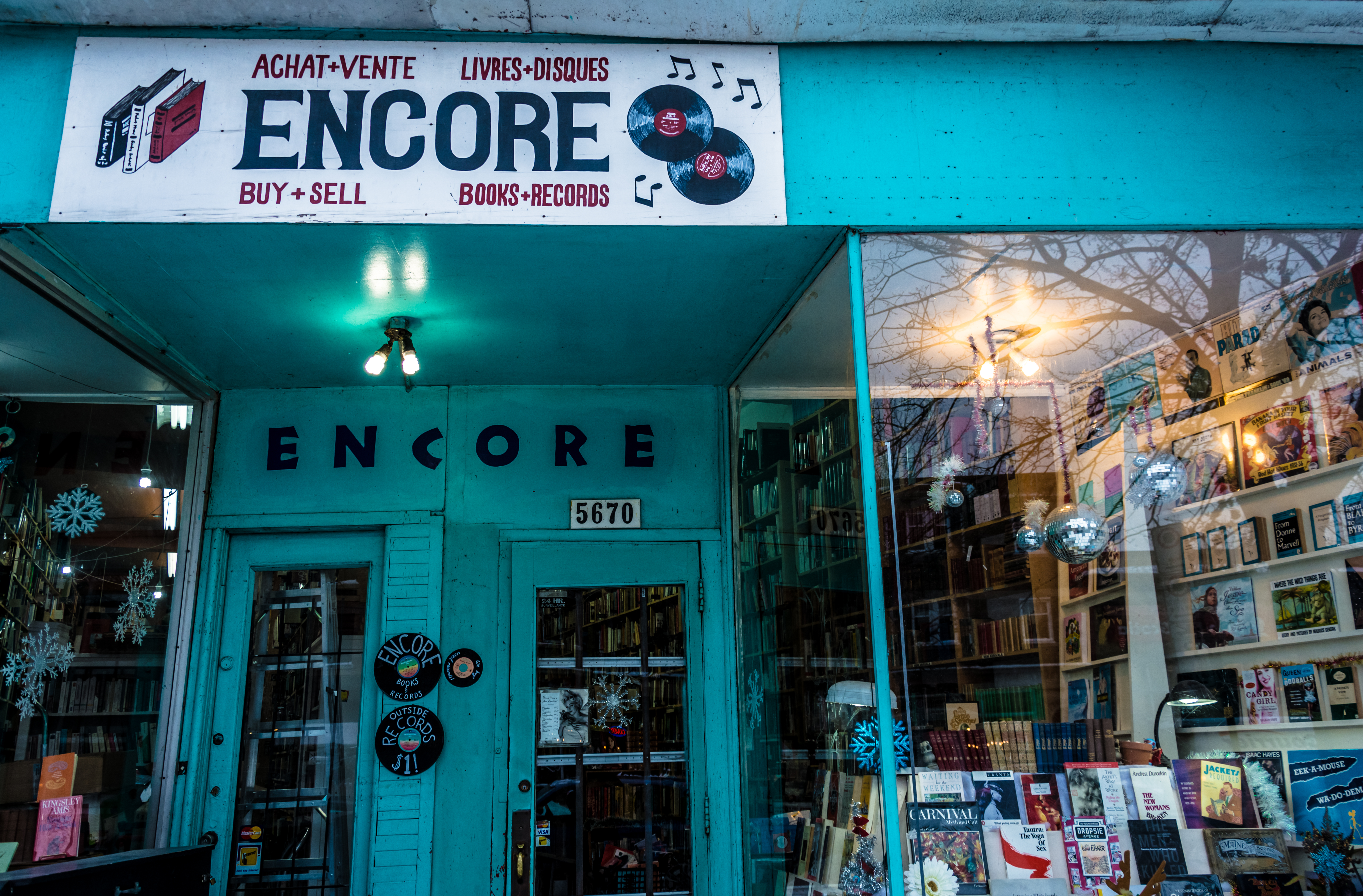 Encore Books and Records in Notre-Dame-de-Grace (NDG) has a similar disposition. Opened in 2004 by Sean and his father, this used books and records store has become a landmark of the NDG community. The store is just what one hopes for. The walls are completely covered with book shelves reaching to the ceiling and it is not hard to imagine an old man sliding along on his ladder, handing you what he thinks you’ll most enjoy, like Ollivander in his wand shop. Aside from used books, it also has an extensive collection of used records, Sean being a music lover. Whether looking for something practical, a staple missing in your own library, or something whimsical and unexpected, this, like S.W. Welch, would be a good place to go. 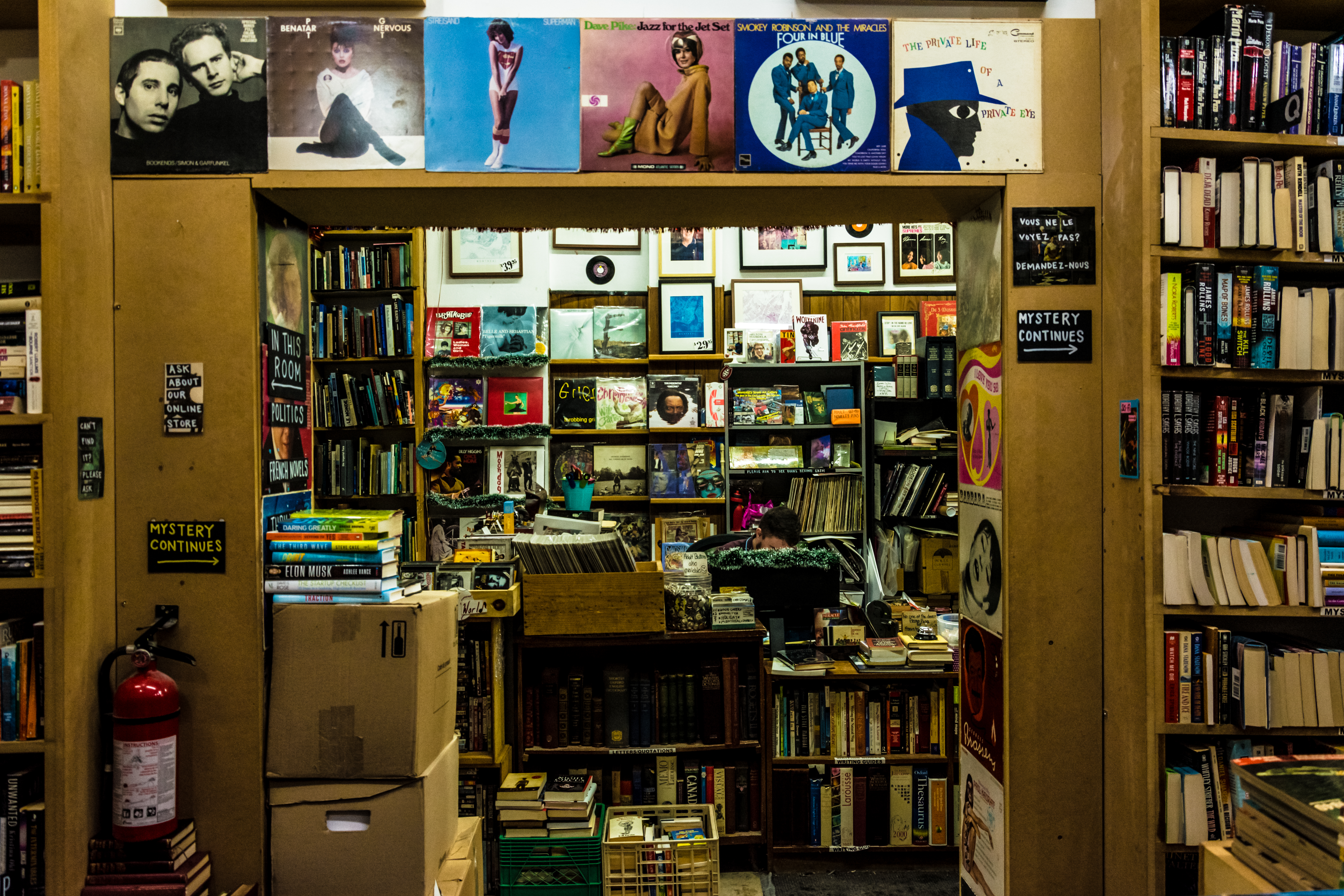 Sean and his father were in the picking business for ten years before they looked to open their own store together. As a picker, Sean would buy books from different sales, rummages, fairs, and then sell them back to used booksellers. There came a point where he realized that booksellers were only looking for specific kinds of books and that he could offer a wider variety to readers if he were to open his own place. Thus, Encore saw its day. In his own words, his store has kind of an “intellectually artsy” feel, but he tries to cater to all sorts of readers. The result is a store chock-a-block full of books of all different subjects, arranged with just the right amount of order.

A few minutes into our conversations, it becomes apparent that both Stephen and Sean take their role of ‘connector of minds’ to heart. To be able to help the customer who comes in to find what they are looking for is part of the pleasure of their work. Part of it is the knowledge that most who come into their shops are “serious readers,” as Stephen calls them: individuals not only concerned with reading through the bestseller list, but those interested in expanding their minds and appreciate good writing.

For Stephen, the relish is in providing worthwhile books “that may have fallen by the wayside.” Sean also looks to provide his customers with sought-after material, but appreciates that his store is a place which encourages getting lost, wandering from shelf to shelf, and tapping into the potential for inspiration. “A big part of being in a bookstore,” he says, “is the ideas that come to you.” Like Jocelyn’s grandfather, Sean values the sharing of ideas that happens within his store, which he says is, in many ways, “curated by the community.” Many locals go to Sean to buy as well as sell, which fosters the sense of it as a place of exchange where the community participates in a dialogue of sorts. Certainly, these booksellers have had the chance to forge particular relationships with the people that peruse their shelves. Case in point, while we were talking, the mailman delivered a letter to Stephen from the daughter of a customer-turned-friend whose bat mitzvah he recently attended. Sean shares that he loves seeing the teenager who used to buy his Thomas the Tank Engine books now coming into the shop to buy his first Sex Pistols record. 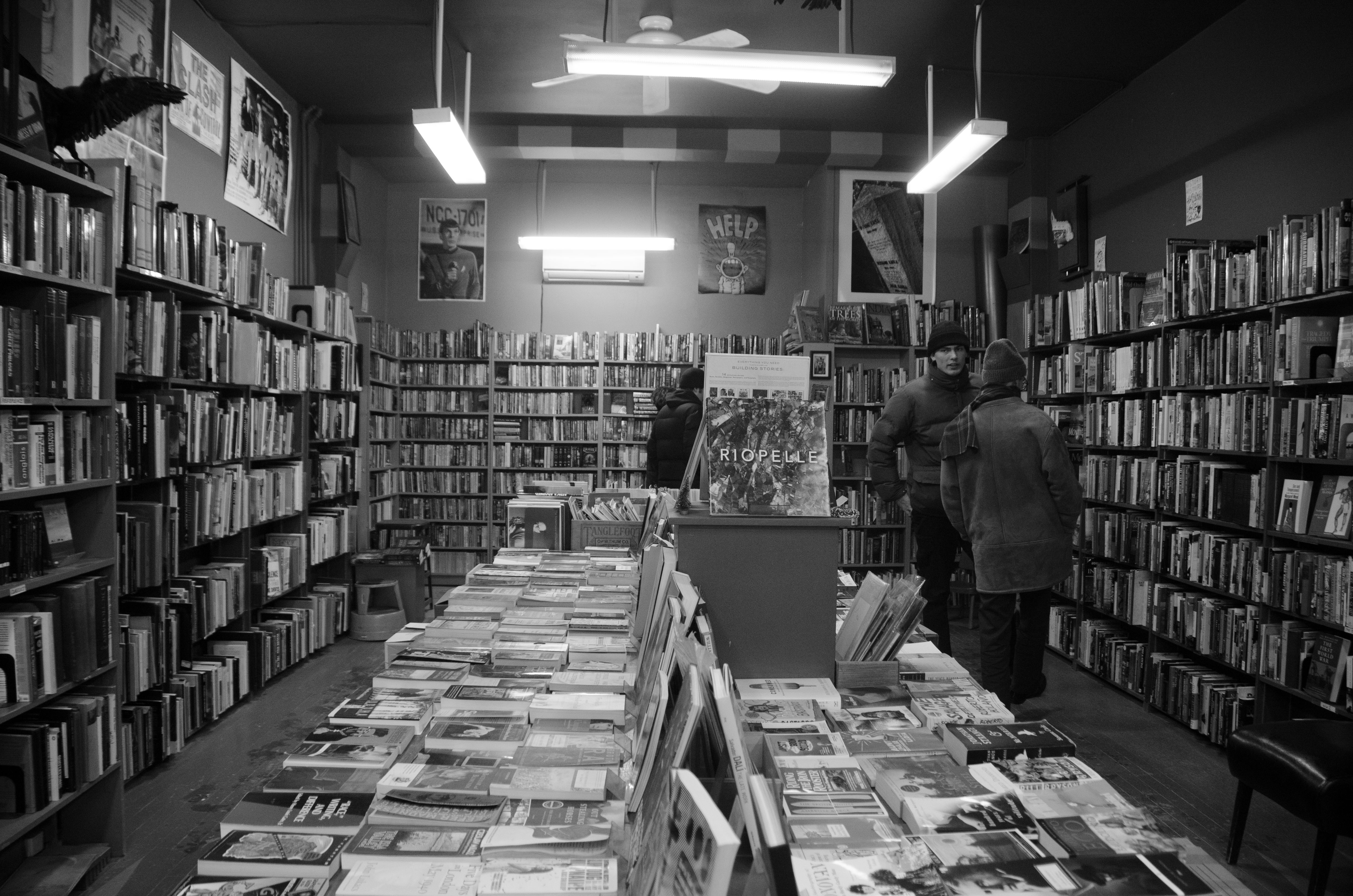 Both owners are very aware however, that businesses like theirs are becoming increasingly hard to find, and not without reason. “This kind of business model is dead,” Stephen says, when asked about the way he runs his store. One of the few left, he does not sell any merchandise online and prices his books according to real value, not simply to beat the prices on Amazon. He is also conscious of competition from larger chains, such as Chapters, which he says “are purveyors of entertainment” uninterested in “cultivating readers,” as well as the competition from the television, film and gaming industries which occupy much of people’s leisure time. Gone are the days when people would gather to play “pong in the parlour,” and when books were a more viable form of entertainment. The result? He has noticed a drop in traffic from the day he first opened to today.

Sean also acknowledges that “it’s really hard to be a small business, especially one with a personal touch.” He points out that for most businesses like his to continue, they must vary the merchandise and go online to counter the effects of increasingly high rent and competition from larger chains. He laments the situation and thinks he is not alone in longing for a time in which life moved a little slower and communities were a little closer-knit. He was hurt, for example, when neighbourhoods stopped having movie theatres, a gathering place that strengthened community bonds.

In A City of Bells, Jocelyn too is faced with the difficulties of running a bookstore and optimistically faces this by saying that if the town “Torminster wants [him], so Torminster shall lend [him] a hand.” But then again, this novel was set after the Boer war, in a time when things certainly moved to a steadier rhythm and Netflix and videogames were not eating up so much of our day.  So, what does the future look like for stores like Encore and S.W. Welch? Stephen does not seem overly concerned. Books, he thinks, will always be around and so will the people who appreciate the way stores like his and Sean’s approach them. I would tend to agree. And though there are certain worrying trends that make it increasingly difficult for small businesses to operate, used bookstores are not simply a vestige of the past, but wonderful additions to any community. For now, at least, Stephen and Sean are providing places behind whose doors you can feel a little break from the rush of life and let yourself be called by the thousands of worlds that lie behind covers waiting to be opened.

The Evolution of Street Art In Montreal, it’s rare to take more than two steps without seeing a wall covered…