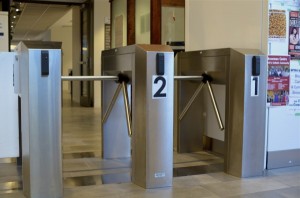 For nearly half of all incoming first year students “Rez Life” is a hallmark of the first year experience. Residence offers an unparalleled way to surround new students with peers diverse in both experiences and beliefs. While this time is exciting for most, it is also the first time that many have lived on their own. Living in a big city such as Montreal presents a set of safety issues with which many students are unfamiliar; many incoming students feel more at ease living in the structured, community-oriented environment of Rez. But just how secure is McGill Housing?

In a recent interview with The Bull & Bear, Janice Johnson, Interim Director of Residence and Student Housing, discussed the reasoning for the security mechanisms that are installed in each residence. The large hotel style residences have strict sign-in policies and turnstiles, while all other buildings only have cardkey access.

The Housing Office justifies the variation in approaches by where the residences are located. As far as McGill is concerned, having to climb the massive hill to Upper Rez is a security feature in itself, since the area attracts so few from outside the McGill community. As a result, the strictest security options are seen as unnecessary. In contrast, La Citadelle, Carrefour Sherbrooke and New Residence Hall are in some of the busiest areas of the city, and therefore require stronger security. “The three large ‘hotel’ residences are in very high traffic areas,” Johnson explains. “There are greater reasons for access control in those buildings.”

Though having stricter protocols in the large residences does boost security, Johnson concedes that they can create an unwelcoming environment. “We do not want to go overboard on the scare-factor with security, yet students must face the reality of living in a city,” she notes. In residence, students interact with downtown Montreal on a daily basis which is why Johnson puts great emphasis on educating incoming students on personal safety. She encourages students to lock their doors and to be constantly aware of their surroundings.

Many first years opt not to live in the traditional residences, preferring those in more of an apartment-style such as the Greenbriar Apartments, Solin Hall, or the MORE houses. New this year to the list of housing options are the Varcity515 apartments on the corner of City Councillors and Saint Catherine’s.

With Douglas Hall closed for the year due to renovations, Housing and Hospitality Services was left to find rooms for the 400 incoming first-years who may otherwise have been housed there, and Varcity515 became the destination for 85 of these students. These apartments are fully furnished suites that house four or five individuals each with their own room.

“Such alternative, apartment style living situations are by far the most popular and most requested [housing] option by incoming students,” Johnson claims. While these arrangements may be in high demand, they present a whole new set of security questions. The key difference between the other apartment-style living options and Varcity515 is that Varcity is not considered a formal McGill Residence, but rather a private building in which McGill Housing has placed students.

The Director of Varcity515, Alice Leduc, sat down with The Bull & Bear to discuss the building’s security measures. Each floor is equipped with three security cameras in the hallways with additional cameras in the laundry and trash rooms. The lock on each apartment’s front door is electronic, recording when it has been dead-bolted, locked, unlocked and by which key. However, Alice reiterates Johnson’s message that Residence is “only as safe as you allow it to be.”

Although security is strong, it does not mean students feel entirely safe. First year McGill student, Natasha Comear, moved into to Varcity515 in late August. On her third night in Montreal she awoke at three in the morning to a strange man stroking her arm. The man left the apartment and Comear reported the incident to security. They read her door and checked the security cameras and found that indeed, someone had entered the apartment. However, because the apartment door had been unlocked, the building had no responsibility to report the incident. Comear, on the other hand, reported the incident herself, prompting the building to post the following on each apartment door:

TO ALL TENANTS OF VARCITY515

This is to inform you that your apartment front door should be locked at all times. If anything happens and your door was not locked we will not be responsible.

Although Comear is not on one of 515’s residence floors, she lives in an identical situation to all other McGill students in the building. News of the incident spread throughout the building prompting students to rethink their assessment of the building’s safety. Comear has since installed a peephole on her apartment door for extra security and locks her bedroom door every night. “I felt really unsafe for a couple days. I feel that the building should have been more sympathetic to the situation, even if our door was unlocked.” When residence student Zoe Reindl-Heit reflected on the incident she said, “When I think of Rez I think of community. I hate to think that things like that could happen in a place that is supposed to be our new home.”

Leduc claims that such incidents are often alcohol related and tend to be benign. “We have kids who come in on Friday night, Saturday night, who are drunk and don’t realize what floor they are getting off and they walk into the wrong apartment,” she commented. Leduc reiterates that students should be careful to keep their doors locked and be mindful of who they allow into the building.

Student Housing and Hospitality Services attempts to offer a safe living environment regardless of the residence, but Johnson feels that much of the responsibility for safety lies with the student. “Every year we try to instill that sense of responsibility,” noted Johnson. Personal safety is a skill that you take with you when you move out.” However, many still feel that McGill should take more responsibility for them. “Honestly, I would rather live on my own than in Rez,” asserted Aykonur Nakajima, a Varcity515 first-year student. “Our parents want us to live here because they think it’s safer, but it’s not.”

On December 3, 2020, the Students’ Society of McGill University (SSMU) held its last legislative council meeting of the semester,…