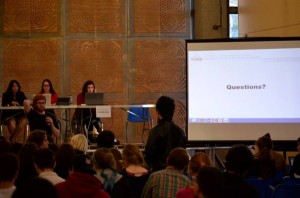 On Wednesday, the Student’s Society of McGill University held their first General Assembly for the semester in the SSMU Ballroom. The agenda included two motions: the first motion regarding proposed changes to the SSMU Constitution, and the second regarding the proposed Quebec Charter of Values.

Due to the failure to meet quorum, the approval of nominations to the Board of Councillors was postponed until the next GA. In the past, faculty representatives were appointed directly to the board by the executive; now, all appointments must be approved by a General Assembly. Until that time, the SSMU executive will act as the Board of Directors.

SSMU President Katie Larson briefly discussed the proposed changes to the SSMU Constitution. The changes include: an alteration in procedure for the creation of the Board of Directors; more clearly defined roles for counsel members; and a more clear definition of “conflict of interest.” Larson explained that the proposed constitution aims to define and outline the SSMU Constitution in more legal terms. “I hope that it stands the test of time… and changes how we do our by-laws.”

Finally, the “Motion Regarding the Proposed Quebec Charter of Values” was brought to the floor. Senators and representatives spoke passionately in favour of the proposed motion, which was proposed by petition. The motion aims to protect its members from the proposed legislation, which, as one councillor stated, “is intended to alienate people.”

As a result of a change in the structure of the proposal, which was approved by the assembly, the executive will be allowed to vote on the creation of an “ad-hoc committee” opposing the Quebec Charter of Values. President Larson seemed confident that the executive would pass a motion to create the committee. A small number of students have questioned whether an external political stance is under the jurisdiction of SSMU, but Larson was adamant that in this case it is warranted.  “[SSMU has a responsibility to] represent students in specialty faculties who will be … affected by the law,” Larson explained. “The motion is an obvious measure for us if we do not want our students to be discriminated against.”

Secretary-General of the GA Jordan Masys expressed disappointment at the failure to meet quorum, but was pleased with how smoothly it ran. “The set up for this was great,” he commented. “We have the online stream, and then we will put the recording online so that is available to students.”

A recording of Wednesday’s GA is available at the following link: http://ssmu.mcgill.ca/ga/

On Saturday evening, McGill students were presented with another development in their student society’s politics. An article was released claiming…