If I had one more day to live, my last meal would probably be a beautiful bone-in ribeye cooked to a perfect medium-rare, juicy and red. Or maybe a whole platter of Peking duck and braised beef noodle soup with the chewy tendon in between tender pieces of beef. I am, and I have always been, a bit of a carnivore; even between meals I often used to snack on charcuterie or leftover steak.

However, while I do eat meat from sustainable farms, I came to learn that my daily red meat consumption added to the negative impacts of climate change and global warming. While I have always tried to be environmentally conscious, the impacts of this global disaster didn’t entirely hit me until I listened to a podcast where famous chef Dave Chang interviewed David Wallace-Wells (author of The Uninhabitable Earth) about just how devastating climate change will truly be. So I made the decision that once I started university, I would try to cut back on my meat consumption, especially red meat. However, I soon realized that eating a more plant-based diet while subsisting off the McGill meal plan was more difficult than I initially believed it would be.

While McGill does offer vegetarian and vegan food, the options are fairly limited. Along with that, it is often difficult to find a plant-based meal that doesn’t contain highly-processed “fake meat.” (Eg. veggie burgers with lengthy lists of ingredients difficult to pronounce). As someone who tries to consume as few processed foods as possible, and as someone who tries to get protein from more natural sources, the amount of fake meat offered in our cafeterias with no other alternative was disheartening.

If McGill wants to be committed to sustainability, one way the university could follow through on this goal is to offer more vegetarian and vegan dining options.

If I planned on adopting a more plant-based diet for environmental reasons, what is the point of eating fake meat whose environmental impacts may not be as clean as advertised? If McGill wants to be committed to sustainability, one way the university could follow through on this goal is to offer more vegetarian and vegan dining options. Not only will those who abstain from eating meat or dairy products have more choices, omnivores like myself who want to decrease their carbon footprint will have motivation to consume fewer meat products. 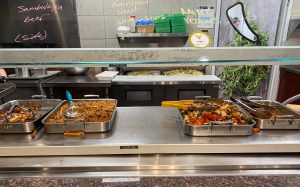 The typical vegetarian option at RVC, mostly vegetables and fries. (Photo by the author.)

If our actions fail to be drastic enough, this may have grave consequences for our planet. Scientists predict that the Earth will be uninhabitable by the end of this century. In fact, it already is for millions of people, as rising sea levels and extreme weather patterns just scratch the surface of climate change’s negative impacts. From a the standpoint of a North American living in a relatively wealthy country, it is difficult to even grasp the effects of climate change and fully understand its impacts. However, our consumption habits (from meat consumption to fossil fuels) are paving the way to what Wallace-Wells describes as “horrifically inhospitable” living environments. Although it may sound bleak, there are solutions we can take to minimize our own carbon footprints. If meat and dairy consumption was eliminated, the world’s total farmland area would be reduced by 75 percent.

A lot of people, myself included, are not willing to fully give up meat and dairy products.

If enough collective action is taken, it could potentially have an impact on th entire world. Even small, gradual steps towards eating a more plant-based diet is helpful. A lot of people, myself included, are not willing to fully give up meat and dairy products. We hold our charcuterie boards a little too close to our hearts. If McGill’s dining halls offered a more diverse selection of vegan or vegetarian options, more students would be open to trying out these foods. Compared to other university dining halls, McGill’s plant-based options are lacking. Concordia, for example, has extensive vegan options that are integrated into the dining hall menus. Instead of just having one or two plant-based options a day, Concordia has a myriad of choices which makes eating less or no meat easier for both vegans and omnivores. At the University of Toronto, they have a vegan buffet. We have the resources in place to make the reduction of meat and dairy products easier. As such, we need to take advantage of what we have and try to limit our intake of these products.

If McGill wants to become a more environmentally-friendly school, this goal cannot be confined to the administrative level. The university needs to get its students involved too. Adding more plant-based dining hall options is an easy way to achieve this goal, and it may open vegetarianism and veganism up to more people. With increased exposure, students may continue minimizing their consumption of animal products beyond just BMH and RVC. And who knows? We may just be helping to save our planet along the way.

Undergraduate students everywhere participate in campus events for the company, intellectual stimulation, and most importantly, the promise of free food….