Concerts bring about a magical energy: from their anticipation, to the mutual experience of listening to an artist within an uplifting and super-hip crowd, and the cheerful post-hoc nostalgia. I recently had the privilege of attending Alina Baraz’s Montreal-stop of her tour at Theatre Corona, and ever since Baraz walked off stage, I felt a strong longing to revisit the experience.

Cleveland-born R&B artist, Alina Baraz creates primarily feathery, romantic, and ultra-feminine melodies that are backed by empowering, fierce drumming techniques. On stage, the drumming is physically embodied by an exuberant background dancer, who adds a visual flare to a fan-favourite element of her music. Raised with a Russian heritage, and upbringing on classical music, Baraz’s music is heavily atmospheric, like a soundtrack to Baz Luhrmann’s The Great Gatsby or Romeo + Juliet. Entering Theatre Corona, I was expecting a sit-down, slow listening experience where listeners could simply sway to the ambience of Baraz’s iridescent tracks. To my surprise, Baraz hosted a party; the crowd was active for the full hour of her show, Baraz herself was energetic and bubbly (despite some melancholic themes present in her songs), and sang amongst a concentrated, but lively keyboardist, drummer, and guitarist. Her sensual aura filled the room as soon as she walked on stage- it was as if she was an unearthly angel, stunning the audience with her old-Hollywood sultry style and doll-like glamour.

On stage, the drumming is physically embodied by an exuberant background dancer, who adds a visual flare to a fan-favourite element of her music. 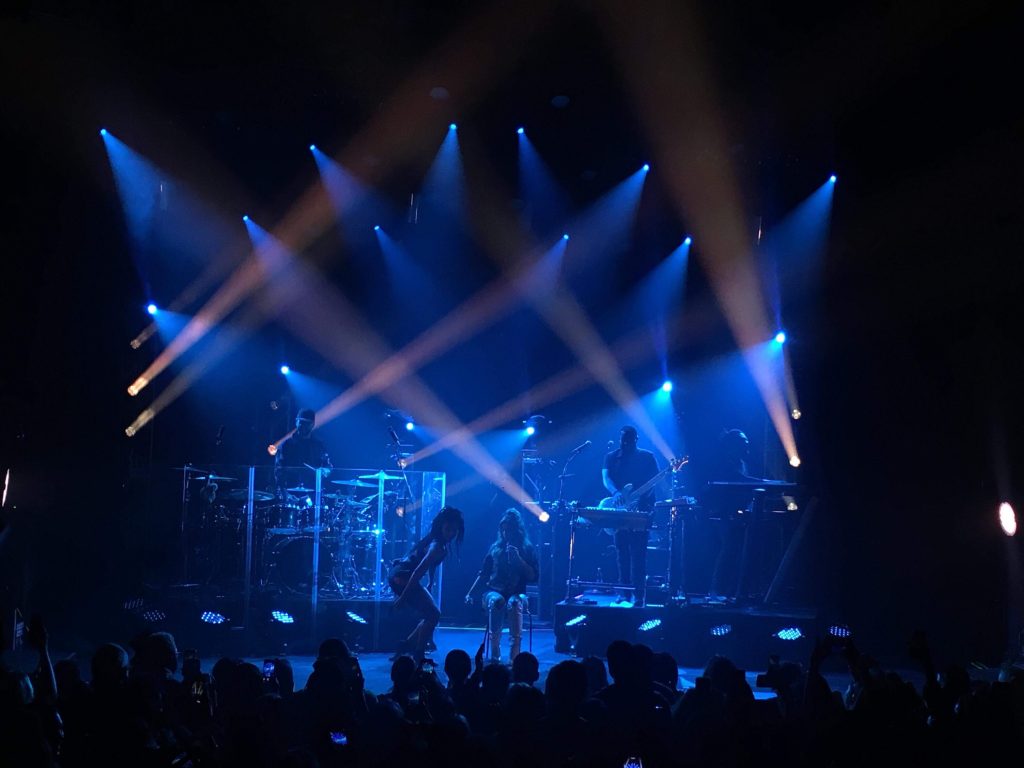 The live show also felt intimate, despite the larger, moving crowd and energetic background dancer (that could have easily stole the show, if she wanted to). Baraz often knelt down to her fans, looking them in the eyes, and pointing directly at them while singing ‘you’ (something fans would melt over). She made the audience feel personally addressed, like each song of hers was customized to soundtrack someone’s current feelings and experiences. In general, standing in the crowd, was a wholesome experience. I noticed Baraz’s friends and crew running between the backstage and the pit, grooving and singing along to the live show, with a similar, upbeat energy to the crowd- as if they were experiencing it for the first time.

She made the audience feel personally addressed, like each song of hers was customized to soundtrack someone’s current feelings and experiences.

Live, the artist mainly performed tracks off of her debut solo album, “The Colour of You”, which discuss self-love and development in light of letting go of toxic love and self-pity. Her songs, like “I Don’t Even Know Why Though” or hit single featuring Khalid “Electric”, have a light-hearted spirit amidst a heavy, soulful melody. Many others discuss harmful, romantic relationships, and the cycle of opening up to someone only to be later manipulated by your vulnerability- something a lot of us, unfortunately, know too well. Yet, listening to her first notable works with Galimatias for EP “Urban Flora”, compared to her newest releases, there exists an evident shift in Baraz’s spirit. Before working on “Urban Flora”, Baraz had made a radical move to Los Angeles to find her path into the music industry, where she knew nobody and shut herself off in her bedroom for months. The Rolling Stone magazine called the EP “un-dynamic music, an exercise in tone control”, which is true – it features minimal tempo changes and Baraz’s voice sits comfortably in one tone. “The Colour of You”, on the other side, holds a more radio-pop attitude of a variability of beats and an array of highs and lows in vocals: trends audio consumers are currently keen of. Despite still hovering outside of the mainstream spotlight, Baraz is slowly making her way into a femme fatale stardom. Just like SZA or Kali Uchis, I am sure that Alina Baraz’s sultry, soft vocals and mysteriously charming aura will hit the music industry by storm.

Last semester, Laurier University was in the midst of a free speech controversy that erupted when the university punished a…