On Monday, February 12, The Bull & Bear attended a panel discussion about the efficacy of safe spaces in academic institutions. This discussion, titled “The Theory and Practice of Safe Spaces,” was jointly hosted by the Women of Colour Collective of McGill Law and the Runnymede Society, which brought together students, faculty members, and individuals from diverse backgrounds.

These two dichotomous organizations engaged in a highly politically charged discussion to bring diverse groups together. The Runnymede Society serves to debate and discuss rule of law and freedom of expression in a Canadian context, while the Women of Colour Collective is a safe space for racialized women, indigenous women, and trans folk within McGill’s Faculty of Law. 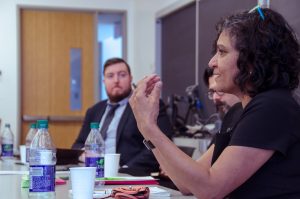 In an opening statement written by the groups, moderator and associate Professor Dr. Nandini Ramanujam outlined the need for such a union: “Runnymede and the Women of Colour Collective are two distinctive clubs with different experiences and initiatives. However, we recognized and hoped that a co-organized event would mitigate the possibility of an insular discussion and promote a diversity of voices.”

I feel in order to grapple the question of safe space we need to talk about power, understand there are all kinds of hierarchy and privilege.

The first speaker was Dr. Victor Muniz-Fraticelli, Associate Professor of Law and Political Science. He emphasized that there is a time and a place for politically charged debate on campus, and noted the many functions of university campuses: “A university is not just a classroom or research centre, it’s also a home for thousands of students…and of course it is a place where inquiry and debate take place and the norms of debate are practiced and taught. It’s important to differentiate between those places, the standards of inquiry and debate that take place in the classroom are different than the ones that take place in the dorm.”

Dr. Muniz-Fraticelli also noted the origins of the concept of safe spaces to protect certain groups of students from violence, intimidation and harassment. He commented on the viability of academic debate surrounding the topic, stating: “If a safe space allows for some discussions to emerge which otherwise would not, then it may be academically justified, [and vice versa].”

Dr. Dolores Chew, a research associate at Concordia’s Simone de Beauvoir Institute, spoke next, underlining the need for safe space to reconcile differences in privilege. “It’s about having a great wide perspective that we don’t all occupy the same level playing field,” she expressed. “I feel in order to grapple the question of safe space we need to talk about power, understand there are all kinds of hierarchy and privilege.” 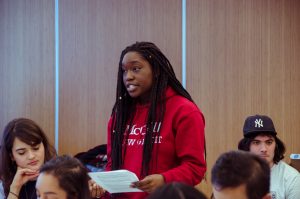 The third panelist was Michael Kennedy, Director of Communication and Development of the Justice Centre for Constitutional Freedoms. Kennedy is also the lead author and research director for the Campus Freedom Index, an online index that ranks the state of free speech in 60 Canadian public universities. He sought to demonstrate how the varying definitions of safe spaces can be problematic in the context of debate: “At some universities safe space is simply a room, a broom closet even, where students can go if they’re feeling stressed, while at other universities it has come to encompass the entire university campus or the student union as an organization… One of the problems with safe space is [that how it’s interpreted] depends [on] who you talk to. Who is it safe for? Who is it safe from?”

Kennedy called attention to the sometimes exclusionary nature of safe space, specifically at Ryerson University where a Men’s Rights group and a Pro-Life group have been banned from using space on campus. He went on to defend groups with controversial ideas, stating, “Free speech has always been working against safety on campus, it goes back hundreds of years…whether it’s the gay rights movement, the anti-war movement, [or] women’s suffrage. All of these groups were agitators, they were offensive, and universities used safety and their version of safe space to justify expelling these people for their freedom of ideas.”

“We don’t need a right to freedom of expression if you’re saying popular things, it’s only when your ideas are unpopular that you face censorship and being denied a voice and a platform,” Kennedy elaborated. “Discomfort and offence have always been a part of the social movements that we are so grateful for today. We wouldn’t have had these breakthroughs if people hadn’t been allowed to criticize the status quo.”

[metaslider id=21696] The 36th  Desautels Management Achievement Awards (DMAA) was held on February 6th. The event serves to recognize and…