If you’re looking for a delectable meal, look no further than the top floor of the Montreal Eaton Centre, where you’ll find Time Out Market Montreal, the city’s newest culinary adventure. I often find myself wanting to venture to eat at places I see on Instagram or on food blogs, but for students, it’s not that easy. Lucky for us, Time Out Market Montreal brings the best restaurants from around the city to the downtown core.

The culinary concept is not the first of its kind in this city. Last month, Montreal saw the opening of Le Central and is anticipating Le Cathcart Restaurants et Biergarten’s launch in Place Ville Marie. Time Out Market Montreal, however, is unique; it is known worldwide as the magazine for all things food, drink, entertainment, and tourism. Its “markets” are designed to bring together chefs to represent the local culture and culinary landscape of that city. While Time Out boasts food halls in six cities around the world, with three in the works to open in the next few years, this is the first Time Out Market in Canada, putting Montreal’s diverse and impressive food scene on both the Canadian and world stage.

As CEO Didier Souillat told The Bull & Bear, “Montréal has developed into a culinary hotspot and is now one of the world’s foodie capitals.” He said, “This is a city with incredibly creative chefs and restaurateurs, and an audience with a love for great food. As if this wasn’t enough, Montréal also has a buzzing cultural scene.” A combination of these factors makes Montreal the perfect location for this 40,000 square foot market with shops, entertainment space and three full bars, in addition to its food stations.

Photo by Patricia Brochu for Time Out Market Montreal

Since its doors opened on November 14th, 2019, Montrealers have flocked to this culinary oasis to taste curated menus from 16 of Montreal’s most esteemed chefs. This past week, I ventured to Time Out Market to see what it’s all about.

As CEO Didier Souillat told The Bull & Bear, “Montréal has developed into a culinary hotspot and is now one of the world’s foodie capitals.”

The variety of restaurants made the experience thrilling for a foodie like me, especially since some of the stations, like Foxy and Le Club Chasse et Pêche, are fine-dining restaurants. Their stations provide highlights from their restaurants in an affordable and accessible fashion. While I did not eat at either of these restaurants, I still experienced a diversity of cuisines because I went with a group of friends, which I would highly recommend if you’re into sharing. While Souillat did not want to reveal his favourite station to The Bull & Bear because he “can’t be upsetting 15 chefs in one go,” we will share our top three choices!

A pasta lover’s heaven, Mile End staple Il Miglio is known for its casual atmosphere and impeccable pasta. The station in the food hall serves four pasta dishes, each crafted with fresh seasonal ingredients. They also have classic Italian appetizers like burrata, Caesar salad, and arancini. Since I am obsessed with pasta, I couldn’t resist getting two plates: the Campanelle with mushrooms and white truffle oil, and the Fusilli with nordic shrimp and pistachio pesto. Both were incredible.

Located in Old Montreal, Marusan serves some of the best Japanese food in the city. Helmed by kaiseki chef Tetsuya Shimizu, the menu at the station showcases the best of their simple menu. They offer signatures dishes like their donburi rice bowls and karaage chicken (Japanese fried chicken) but we couldn’t resist the savoury ramen. The noodles were perfect, the broth was thick but not heavy, and the silky egg was delightful. I will definitely be going back to indulge in another bowl on a cold day.

Ramen from Marusan (Photo by J.F. Galipeau for Time Out Market Montreal)

St. Henri favourite Grumman ‘78, known for its eclectic Latin-American fare, takes fusion to the next level. This comfortable and casual street food vibe translates especially well in the food hall. Their menu offers a variety of creative tacos with both vegetarian and meat options. They also have daily specials – a tostada of the day and a dessert of the day – to keep things fresh. The Gobi Halloumi taco and the Popcorn Fish taco caught our eye, and while both were fantastic, the real winner was the Papas ‘78. These garlicky, crispy potatoes were out of this world. 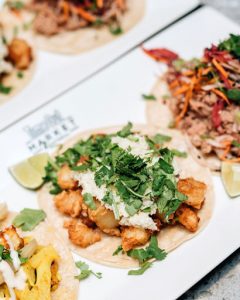 Time Out Market Montreal was more expensive than the average student meal, but definitely justifiable for a special treat. The long lines were worth the wait. The experience was fun, exciting, and certainly filling. I will for sure be making my way back. My next three destinations? Hof Sucrée, Romados, and Paul Toussaint!

On the eve of the Sep. 20 Federal election, the Bull & Bear spoke with the leaders of McGill’s Liberal,…