If you have Twitter, read the news, or are a living, breathing human in 2020, you have heard someone claim that the very democracy of the United States is at stake in the 2020 presidential election. Specifically, they insinuate that another four years of Donald Trump will mean the consolidation of authoritarianism. Many American observers, including politicians and the media, suggest that the world’s oldest democracy is going the way of Brazil or Turkey, being led down a dark path by a populist and anti-democratic leader who will do anything to gain power. And this is not a baseless claim—Donald Trump has demonstrated a blatant disrespect for the rule of law throughout his term, has regularly used violent and polarizing language, and most recently (and perhaps most concerning), has refused to agree to a peaceful transfer of power if he loses the election. However, some perspective is in order. I will not tell you that Donald Trump’s behavior and rhetoric is not a threat to democratic practices—it is, as made abundantly clear by his harmful actions. But I will also tell you that this threat did not begin, and more importantly, does not end with Trump.

Between slavery, the genocide of Native Americans, and the denial of the right to vote and civil liberties to the majority of the population, the supposed democratic nature in the history of the United States is up for debate. The US has also been an imperial power at least since the Spanish-American War in 1898, with its occupation of the Philippines and Puerto Rico and its annexation of Hawaii before its statehood. In 2014, there were studies claiming the United States is an oligarchy, not a democracy. Although observers point to the much-cited American fall from an Economist Intelligence Unit’s categorization of a “full democracy” to that of a “flawed democracy” from 2015 to 2016 as proof of Donald Trump’s undemocratic nature, the actual story is more complex.

The true danger will remain whether or not Trump is re-elected.

As you can see in the figure below, the United States’ rating as a democracy has been steadily declining since 2006. Furthermore, the dip in rating from 2015 to 2016 is comparable to the dip from 2010 to 2011 or that from 2014 to 2015. The change in category is notable and sounds shocking, of course, but numerically, the drop was not unprecedented. Of course, Donald Trump does have a significant authoritarian streak and has made this streak clear; on the other hand, the United States ranks 25 out of 167 countries in the World Democracy Index and has nearly 250 years of democratic consolidation under its belt. 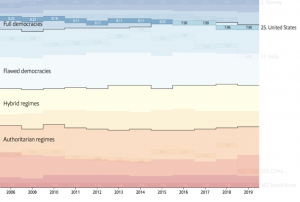 Graphic Courtesy of The Economist

The true danger will remain whether or not Trump is re-elected. Although I have no doubt that a Trump administration would continue to erode democratic practices, there is no guarantee that a newly-empowered Democratic Party or a Biden administration would not take advantage of the hyper-partisan atmosphere and previously-eroded democratic practices for their own gain. For example, Democrats in the Senate unsuccessfully attempted to prevent ultra-conservative Amy Coney Barrett’s appointment to the Supreme Court, asserting it was wrong and unconstitutional to appoint a judge to the Supreme Court so close to an election. It is not unconstitutional, and they were outraged when the Republicans attempted to do the same thing in the 2016 election. This is partisanship eroding democratic rule of law. The system of Supreme Court judge appointment is perhaps flawed, but it is an integral part of American democracy. When democratic norms are eroded, as they have been recently, any and all politicians can take advantage of them to suit partisan ends.

Once democratic institutions and decency are broken, they are very hard to repair.

The problem of partisanship in an atmosphere of eroding democratic norms is that your side will not always win. The Republicans discovered this during Amy Coney Barrett’s appointment—they established a precedent that no longer works for them, and now in arguing against it, they reveal their naked partisanship. The Democrats do the same. Politicians and voters become more and more shameless in arguing that the means justify the ends because, unlike the other side of the aisle, their ends are good, just, and “truly American.”

Those who bite their nails at the mere thought of four more years of Trump, but who cheer on those feisty Senate Democrats who stand up against a constitutionally appointed justice are being hypocritical. In the long run, it doesn’t matter if Democratic policies are more just or right or moral than the Republican ones or vice versa. Once democratic institutions and decency are broken, they are very hard to repair. So, in this election or any election in which you vote, think beyond partisanship and hold politicians who seek to enhance partisanship accountable.

Communal living can be a tricky thing to talk about. The most widely known iteration of communal living, which is…