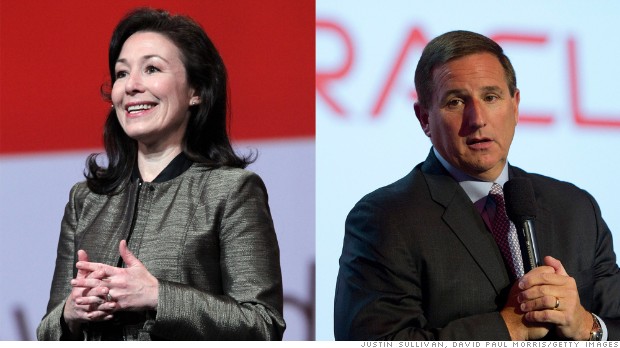 On September 18, Larry Ellison, co-founder of the database software company Oracle, announced he was stepping aside as chief executive. He revealed in the same occasion the identity of his successors – former Hewlett-Packard CEO Mark Hurd and Safra Catz, a former investment banker and long-time Oracle dealmaker. They became co-CEOs of the California based company after the announcement. Ellison will stay actively involved in the company as he embraces the positions of board chairman and chief technology officer. This is probably the first step in a long process of disengagement, mirroring Bill Gates’ renouncement to his CEO position at Microsoft 14 years ago.

Shared governance is a controversial topic not only in the corporate world but also in the political environment. Some countries such as France, Finland and Russia are implementing semi-presidential systems, in which an elected president and a prime minister, responsible for the legislature, share the governance. The powers are divided between the two figures, which can trigger internal inefficiencies.

Complications are often inevitable when a president and prime minister of different political views lead the country. In most cases, disagreements arising from these heterogeneous governments leave little to no room for synergy. Rather, leaders’ conflicting personalities have proven to paralyze the decision making process and divide the government into two camps. Internal power struggles drive the focus away from primary responsibilities of the organization and its leaders.

This example stresses the pitfalls of shared governance in the political environment, which has proven disastrous under certain circumstances. Why would it be any different in the corporate environment?

Most businesspeople are skeptical of the benefits of a co-CEO system. During an interview on Bloomberg TV, former Hewlett-Packard CEO Carly Fiorina shared her doubts about Oracle’s new direction. “I am not a fan of co-CEO business models,” she confessed. This sentiment is widely shared and echoed throughout the corporate world – and for good reason.

Oracle is not the first company to opt for a shared governance model. Citigroup’s co-CEOs structure ended in 2000 due to frequent clashes between leaders. Martha Stewart Living Omnimedia’s test run ended in 2009 after only 10 months for similar reasons. More recently, the German software company SAP’s co-CEO arrangement broke down in May as one of the CEOs stepped aside.

Observations tend to show that co-CEO structures are not viable in the long run. Moreover, it is widely accepted that they do not lead to higher performance. The Journal of Business & Economic Studies investigated this claim. In 2009, it published a research paper after gathering and analyzing data on the share price of 44 companies that opted co-CEO system between 1993 and 2005 and comparing it to similar companies with traditional governance structures. The analysis proved there was no significant correlation between the share price of the company and the governance structure implemented. In other words, companies with two CEOs do not necessarily perform better.

With performance betterment discounted as a real factor, one must also consider the consequences of the shared governance model on the corporate performance and executive compensation. Simply put, two CEOs come with two compensation packages. In the case of Oracle, we are talking big numbers, even for the technology industry. According to the Business Insider, the salary of its co-CEOs will equal US$ 37.7 million apiece for 2014. In comparison, new Microsoft CEO Satya Nadella’s overall package will amount to USD 18 million for this year.

Even some businesspeople understanding the benefits it might have in the long run are skeptical concerning the sustainability of co-CEO structures. Jack Zenger, CEO of Zenger Folkman, agrees that the dual bosses model can help after a big change in the company such as a merger or a charismatic founder stepping aside the CEO role. However, “it seems like it raises an unnecessary set of issues that aren’t really sustainable in the long run,” he argues, especially because he believes one CEO will necessarily end up playing alpha.

Despite a popular reticence towards shared governance in the business environment, some companies still believe taking on dual bosses can be beneficial to their business.

According to Harvard professor Joseph L. Bower, senior executives should come from inside the company. In his book The CEO Within: Why Inside Outsiders Are the Key to Succession Planning, he describes the perfect candidate as being internal to the company, but also capable of challenging the established way of doing business. He qualifies these people as inside outsiders.

“Inside Outsiders are managers who have “grown up,” professionally, at the company, who have developed an intimate understanding of its strengths and weaknesses, and who respect its culture. Yet they have also managed to remain objective about the company and skeptical of any self-serving ideology. That means they are willing and able to question the received wisdom. They are clear about the need for real change.”

Bower believes a co-CEO structure can lead to this desired combination of skills. Firstly, at least one of the leaders has to come from the inside. His knowledge of the company would allow a good understanding of the business, the organization, its culture and its people. Secondly, the CEOs have to work efficiently as a team. One of the benefits that should come from the interaction of different personalities is the ability to question the status quo, with the leaders being able to challenge the ideas of one another.

Division of tasks and specialization are other benefits of shared governance. Larry Ellison assigned well-defined roles to his successors; the combination of Mark Hurd’s product oversight and Safra Catz’s legal and financial expertise was designed to create added value to Oracle, as their respective roles do not overlap. Moreover, the two leaders have been working together for quite a long time and their cooperation has always been productive. These combined factors reduce the risks of power struggles. Finally, an incentive for Larry Ellison to assign them both a new status in Oracle is to keep its talented managers in the company for as long as possible.

One can hope Oracle’s new governance structure will end up as successful as it has been for Chipotle and Whole Foods. But as history suggests, it is more likely a transition stage rather than the new corporate model of the company.

Shared governance is more common in other environments, such as student-run clubs and organizations. For example, Desautels’ Real Estate Club was created this Fall 2014 by three management students, co-founders and co-presidents Jordan and Mark Owen and Simon Yeramian.

The Owen brothers knew exactly what they wanted their club to be and so did Simon. When the three students met after finding out they all had the same interest in creating a real estate club at Desautels, each future president naturally felt invested in a specific role.

“What was interesting is that Simon had ideas and we had very different ones. We became presidents of our own ideas and he became president of his.” When asked to explain the decision-making process of the co-presidency, Jordan answered, “Once we have a solid idea, we pitch it to the group. We all meet very often, we talk about our ideas, and we build on each other.”

While Mark and Jordan focus on the organization of networking cocktail events and Argus seminars, Yeramian is in charge of the planning of real estate panels. However, as in every organization, leaders emerge. Jordan agrees that no matter the nature of the governance, “there is always a leader.”

“In our club there is a different leader for different areas,” he adds to describe the dynamic of their shared governance. For example, Jordan admits to being the leader in getting sponsors for the club’s events. Specialization and good communication between co-presidents prevent the emergence of individual leaderships from bringing conflicts. Should a disagreement arise, the co-presidents work things out and always end up agreeing. Since they are a small group, they don’t feel the need for a strong and concentrated executive power.

The only disadvantage of shared-leadership, Jordan confesses, is the lack of organization they are facing. It can be “hard to allocate work”, he explains, but this is most likely due to the fact that as a start-up, the three co-presidents had to start everything from scratch.

Shared governance appears to be a great structure for young organizations and companies because co-leaders are driven by the same enthusiasm to build something tangible. In the later stages of the business life cycle, traditional governance seems to allow better organization and more effective decision-making.

Over the past couple of weeks, a new McGill volunteer initiative in the Milton-Parc neighbourhood has quickly gained support from…