Unless you’re a first year or you’ve been living a very sheltered existence at McGill, you’ll know that the Management Undergraduate Society throws a massive, consistently sold-out show at Telus theatre every September. The likes of Avicii and Cazzette have all spun at exclusive McGill events and this year was no different. Vicetone, a duo from the Netherlands, has been enjoying a meteoric rise culminating in a North American tour with Nicky Romero, one of the world’s biggest DJ’s. The Bull & Bear got a chance to catch up with them backstage before the show.

We’re setting up backstage, checking the shots, testing the audio, and it feels like I’ve been waiting an eternity. The longer we wait, the more time I have to fully realize that I’m sitting down next to one of my favorite acts in Electronic Dance Music right now. Vivid memories of the numerous times I’ve lost my mind to their songs are flashing through my head. The only thing more intense than the anticipation of the hundreds of screaming party-goers in the club is the feeling in the pit in my stomach as I wait for the interview to begin.

Suddenly one of them gets a text and they erupt into laughter. It’s from Romero. It appears that he’s a pretty funny guy in addition to being a globally recognized producer. Is this really happening? These guys next to me are just casually exchanging text messages with “Nick. R.”? They started roping me in on their jokes and chatting about their last few nights and suddenly I was totally at ease. These young prodigies that play in front of thousands of people every night were just two twenty-somethings living the dream and they knew it. For a brief moment it felt like we were all on the same page. It wasn’t until after their show that I remembered they’d go back to touring all over the world, and I’d go back to scouring the libraries for a quiet place to study.

Here’s a bit of our interview before they did their best to blow out the speakers, or our eardrums, whichever came first: 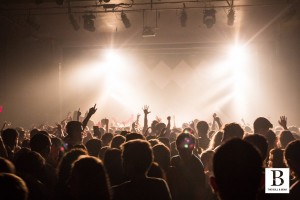 Can you give us a recap of how you got to where you are today?

Basically we spent one year completely ignoring university and just making music every day and it took off from there.

Was there one thing that happened, maybe a DJ playing your song, that made you realize something big was happening?

When Tremble got signed, we knew we were doing something right.

Did you guys go to shows like this and see your favorite DJs?

I (Ruben) used to have a fake ID to go to shows like Tiesto, Armin Van Buren and some trance music.  We were really into trance music about three years ago.

Of all your songs and remixes, is there a specific song that you have as a favorite?

(Victor) Our Let’s Go Remix, it was our first remix we put out on the internet.

(Ruben) Sparks Remix: that was the first one that was supported by DJs and got radio plays.  It reminds me of the time where I felt like things were starting to move for us.  It gives us a nostalgic feeling.

Which current DJ do you guys listen to the most?

Well we’ve been to ten Nicky shows… and I really like Calvin Harris’s new tracks.

Was there ever a time when you guys were not into electronic music?

Yeah, for me (Ruben), I think we all go through these periods in high school: I had a hip hop phase when I was hugely into rap.  (Victor) Also pop music, I used to rock Justin Timberlake, Justified, Cry Me a River…

Was there a specific artist that got you into electronic music?

For me (Ruben) it was Tiesto. I bought his first album when I was 11. We’ve been listening to him since elementary school.  I remember when I was ten and my sister let me listen to Traffic. It’s a classic.  I remember listening to it and getting goosebumps and thinking “Wow, what kind of music is this? This is amazing!”

Is your style based on any other artist? Who are your major influences?

Not really. You get influenced by a lot of artists but we don’t base our music off anybody.  We never did that to start with because we just made the music that we love the most.  You could classify it as house, progressive house or whatever you want to call it.  We don’t really care about it.  It’s just really melodic, energetic and uplifting.  We always try to incorporate melodies and harmonies in our music.  We include a lot of vocals too.

Now that your lifestyle is changing so much, can you still hang out with the same old friends that you had before? Is it hard to see them?

I have a couple of very close friends who are really supportive.  It’s hard to see them; we’re away for six weeks at a time.  You can always hang out with them whenever you’re home.

When you’re on tour do you ever wake up thinking “there’s no way I’m going to make it through this next show tonight”?

We had that after we played in Hollywood: we got on an early 5am flight after our set. Didn’t sleep at all. We had a show the next day, and by four in the afternoon we thought “we’re not going to make it!” We took a power nap for four hours and that got us through.

While Canadian hockey fans will sadly miss the chance to watch their favourite teams in person this season, Canada’s border…