Although Halloween parties and trick-or-treating may not happen this year in the typical fashion, the spooky spirit remains alive and well. For this edition of B&B Picks, we asked our editorial board to reminisce on one of their best Halloween costumes from years past. 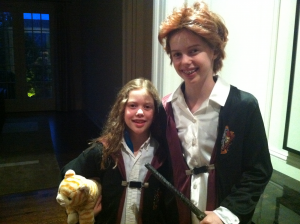 October of 2011 came in the peak of my Harry Potter phase, so naturally, I organized a family group costume honouring the franchise. Pictured here with my younger sister as Hermione (note her stuffed Crookshanks), I boldly stepped into the role of famous ginger Ron Weasley. While we were not a family who generally got store-bought costumes, exceptions were made for robes, wands, and of course a ginger wig. To my dismay, the store’s only redhead option was a full-on mullet. My mother helped me give the mullet a haircut, maintaining business in the front but cutting down significantly on the party in the back. I think Rupert Grint would have approved. 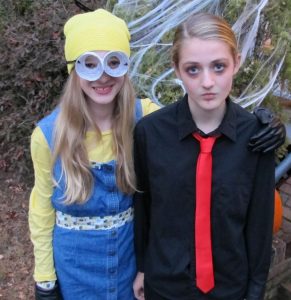 Only those who went through an emo phase will immediately recognize my seventh-grade Halloween costume: Gerard Way of My Chemical Romance.  I sometimes joke that my biggest regret is not fully committing to my emo phase (I appreciated the music but didn’t dress the part), but I’d like to think that I pulled through with this one. If you’re at all curious, stream “Three Cheers for Sweet Revenge,” although I can’t say I’ll be joining you. Also, note the thematic juxtaposition with my younger sister’s much more impressive Despicable Me minion costume, which truly dates this picture to 2013. 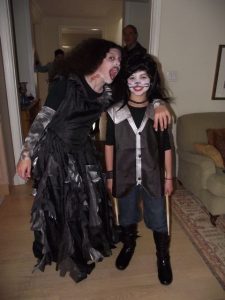 The year was 2011. It was two nights before Halloween and I still didn’t have a costume, so naturally, the solution was to hit up Party Packagers for a last-minute get-up.  After standing in line for over an hour, I was somehow convinced that I would be the perfect zombie-bride/ scary-dead-woman-in-a-dress-thing— the picture speaks for itself.  Needless to say, walking into my grade 6 classroom on Halloween was like the scene from Mean Girls: I was Cady Heron taking it way too seriously, and there were all my friends dressed up as sexy Twister and pumpkin spice lattes. No, I didn’t have some cute “I’m a mouse, duh” answer when my friends asked what I was dressed up as, and truly still don’t. 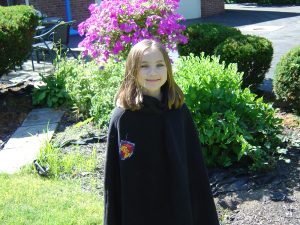 I’ve always been a very nerdy and lazy person, so for me, a Hogwarts student was always a great go-to costume. I fear that my laziness is emphasized here in comparison to Executive Editor Maya’s exceptional dedication to character.  As much as I cringe seeing J.K. Rowling’s latest writings in the form of her tweets, I will always have a place in my heart for the Harry Potter books and their formative role in my childhood. My mom made me this really cute costume that was warm enough for Ohio’s October nights, and I spent many Halloween nights dressed as the coziest and most adorable witch in the wizarding world! 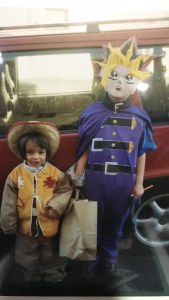 While I dressed as a cute, innocent cowboy in a hand-me-down costume, my older brother opted for a somewhat terrifying Yu-Gi-Oh! ensemble. We still have the mask hanging in our basement, a constant reminder of a time when my biggest concern was getting enough Milky Ways (my candy of choice as a kid). My memories from this day are fragmented, but I do remember being mistaken for a boy several times throughout the day. 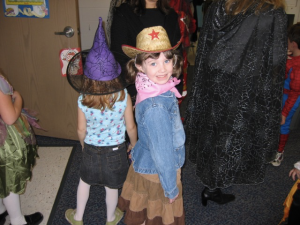 Seems as though the Opinion section ain’t big enough for two cowboys. Among a class of witches and Spidermans, I certainly had my peers shaking in their boots with my Old Navy khaki skirt and 12-gallon hat. Being a cowgirl was a dream I still have to this day; unfortunately, Halloween in second grade was the only taste I got of the Wild Western life. Needless to say, I still had a hog-killing time thanks to my mother, who gave this getup a lick and a promise. 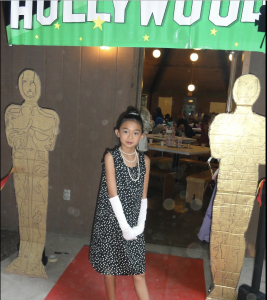 From the (very realistic) gold-painted cardboard Oscars to the red carpet that doesn’t quite reach the doorway, this is very obviously a 2011 Girl Scouts-hosted Hollywood-themed Halloween party. I don’t know who or what gave me this idea, but who better to represent Hollywood than the film and fashion icon herself: Audrey Hepburn. The bun! The tiara! The long white gloves! The pearls! The red lip! It’s all there and I wish I could say my 10-year old self was channeling any of Audrey’s energy that night but my wide-eyed grimace and awkward posing suggest otherwise. In any case, I think everyone, especially myself, could use some of Audrey’s class, style, and heart.

Halloween has always been a sacred time in my household, with every detail meticulously planned.  Pumpkins are carved. Cobwebs are stretched out to connect barren trees in our front yard. Unfortunately, during Halloween 2010, I forgot one crucial last-minute detail: a costume.

I needed to improvise, so I threw something together. I kept on what I had with me from rehearsal, black sweatpants and a black long-sleeve shirt, then I reached for a variety pack of colourful Post-It Notes tucked away in my mother’s desk. I wrote various reminders to perform chores on the Post-It Notes, from, “Walk the dog,” to “Take out the garbage,” to, perhaps most ridiculously, “Plan Halloween costume.” Covered head to toe in reminders hastily scribbled onto sticky notes, I was “Forgetful” for Halloween 2010.

I forgot to take a photo of my costume that night, which honestly just seems like poetic justice. 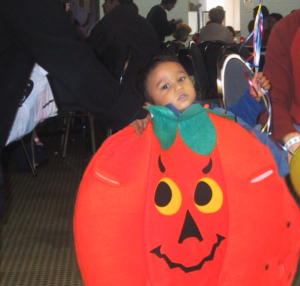 As hard as it is to remember what exactly was going through my head at this exact moment, I think this signature ‘04 Rohan costume is as simple as can be, and representative of most of my Halloween costumes throughout time: too large, a bit itchy, and always in need of my Mom to make adjustments to.

An earlier version of this article quoted Erin Sobat as saying: “the new job of the floor fellow is to regulate…