Formerly a McGill student specializing in art history, Colin Spratt dropped out in May 2016 to pursue a full-time independent project as a sound engineer, running a studio (dubbed ‘Plastic Soul Studios’) out of his apartment in the Plateau. Make no mistake, the space may be small and unusually located, but Spratt has turned two rooms of his apartment into a fully functioning studio, complete with soundproofing and a variety of professional equipment.  The Bull & Bear got a chance to sit down with Spratt to talk about his experience in the Montreal music scene and the path that led him to where he is now.

Bull and Bear (B&B): Talk to us about your initial involvement with the music scene in Montreal before you started this project.

Colin Spratt: One of the reasons I wanted to come to Montreal was out of an awareness that there was a lot of music here. I didn’t run that by my parents, but I was overly aware growing up in highschool that a lot of bands that I like were in Montreal.

It was actually serendipitous. I came to Montreal with this sort of utopian idea of finding all the right people and instantly getting a band together… and then that actually happened. That was Fleece. How that happened was, the second day of university I knocked on the door across from my room [in residence] and it was [bandmate] Jon. He was holding the same guitar that I had, a Gibson SG, and the rest was basically history.

Within a few weeks we had written songs, but it was just for fun, and I was still not very aware of the ‘real’ Montreal scene.  I went to visit my friend who lived in Grey Nuns Residence at Concordia. So I picked up a guitar there and Ethan Soil, from Fleece, was just in the room at the time and he literally asked me ‘do you want to start a band?’ I said sure as long as my friend [Jon] can be in it as well.

So we show up to practice and he [Ethan] has a keyboardist, and a bassist and we had two guitars. And that was Fleece, just like that.

B&B: So it had this sort of miraculous start

Spratt: Complete serendipity. There was no real thinking it through… Ethan had a great rule with the band against playing covers. It made us write our own music right away.

B&B: So with Fleece you got more involved in a serious music scene.

Spratt: Yeah, because once you start playing, you meet other bands, and you understand how to book a venue, etc.

B&B: So beyond just playing shows and writing songs, did you get some recording experience when you were with Fleece? Was it that experience that prompted you to get into the more technical side of things?

Spratt: No, well I already came out of high school wanting to make something like “Dark Side of the Moon”. I don’t mean that in a cocky way or anything, I was just already interested in sound engineering as a job.  I came to Montreal thinking ‘oh it would be cool to work at a studio’, or even going into the McGill sound recording program. I took some beginner sound recording classes at McGill, and then during the time with Fleece I started dabbling in recording. But the big ‘ah-ha’ moment was when we recorded Scavenger, the first Fleece album. It was with this guy Patrick McDowell.

With Pat — he worked at CJLO, Concordia’s radio station — I really got along with him during our recording [with Fleece]. I was starting to get a little bummed out with school in second year. I was thinking of switching into a sound recording school. [Patrick] had his own little studio in like a concrete bunker out in the Mile-end. And I was like, this is so frickin’ impressive that this guy runs a business out of this space…like it didn’t have to be Abbey Road studios or Trident studios or anything. I could do it, it seemed so tangible. 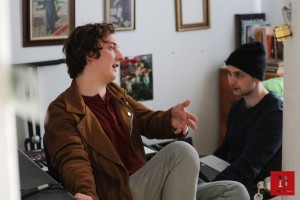 was thinking I had to learn more before I hopped into it. I was considering going to one of the sound engineering schools in Montreal, but on a tour for one of them they were telling me things like ‘this is a compressor’ ,’this is an EQ’ etc. I was thinking ‘this is not worth twenty thousand dollars, I’ve done this since I was eighteen in my bedroom sort of, I just need actual equipment.’

B&B: So in that case, you’re self-taught when it comes to most of the technical aspects. How did you get to where you are now in terms of technical know-how?

Spratt: Well, for example, you can learn physics just from a book if you want. Having a guy in a room teach it to you makes it easier. But the only thing is, in university, the certificate means everything. If you’re applying to jobs, they want to see that nice piece of paper. I get that, that makes sense — you can’t just convince people that you’re really good at physics. I thought it would be the same with this sort of stuff [recording].

Probably the turning point in my life, well so far — I don’t know if I’m gonna do this forever — was when I called Patrick, and told him I was thinking of going to one of these recording schools and dropping out of McGill. He said to not drop out of McGill and that I could work at CJLO with him. Or at least it was volunteering. And I did nearly one hundred of those gigs at CJLO. Every week a band would come in…and the first day it was like ‘Colin, mic the drum kit’…I didn’t know how to f-cking mic a drum kit. He would show me and move the mics accordingly, so I would start to figure it out.

Eventually I found myself kind of disagreeing with [Patrick] on decisions. And that’s when you start doing your own thing. It’s not really a precise science. Some people will use three mics to record a drum kit and some will use over 25. It’s better to just do it and see how it sounds.

B&B: So working at CJLO kind of gave you a sense of the way you want to do things. Can you speak about you’re own approach to recording?

Spratt: Well something that I don’t do is record in pieces. I mean I have done it. To make a pop record with a singer, you have to layer, and use a metronome to put things into time. 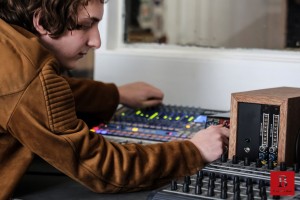 When we did the Fleece album, we recorded drums first, then keyboards one day, and when I showed up the whole record was done and I just had to put little solo bits on top and played chords. I was thinking one day, this just doesn’t sound like how we sound live. [Patrick and I] just have a different way of doing things, he’s probably better than me anyways. I like the little mistakes I guess.

B&B: So before you dropped out, you had been navigating your way around the music scene in a band. Obviously what comes with that is meeting other musicians and people involved in the industry (such as your friend at CJLO). So now that recording is your full-time gig, can you tell us about you relationship with the ‘music industry’ at this point?

Spratt: Right, well the big thing with anyone who wants to start doing this is to get a resume of records. It’s really hard to get someone to start recording if they don’t know what you’ve done. At first it’s not really obvious, but once you try to get a client by going to a show and saying ‘Hey I really like your band, do you wanna record’…you want to have something to back it up with.

Spratt: Yeah I’ve done that. Well not anymore…initially it would be just be people I know, but not anymore. The first guy I recorded with here, I was actually lucky as f-ck. I actually met him at CJLO, he did a session there. He had just moved here. I had done little things where I recorded band just to make sure the space sounded good and then some acoustic projects with friends. But the first guy that I did a proper recording session where I got payed an hourly wage and per mix: he’s [signed to] Polyvinyl records which is like [pretty big]. This is the only record — I’ve done maybe like fifteen records here — and the first recording I did is on vinyl! *chuckles*

*Spratt pulls out a vinyl yellow record from his shelf, Fred Thomas’ Changer*

I didn’t do the whole album, but I did little bits. We did a session together at CJLO and got along really well. He was like ‘man I just moved here, it’s kind of hard to make friends with people, I don’t speak french…’ So he was trying to finish this project but all of the studios he had in mind were run by big Quebecois producers. I was like ‘there is a god!’ and asked him [if he wanted to record with me]. And I had no clue how [popular he was]. I mean he’s not famous, but he’s definitely a known musician. You can look him up on Wikipedia and all that shit… pitchfork etc. This record was on pitchfork, so I was like ‘Holy sh-t! The first thing I recorded was on pitchfork.’ Then I was able to tell people ‘yeaaah I recorded Fred Thomas.’ And that’s all you need, is a record…and I was very very lucky.

Spratt: Well first what I hope to do is have a website that shows all the albums that I’ve worked on…just having a discography to show people. The next big thing, is actually moving this space. In a couple months I’m moving to a space in the Mile-end that’s going to be a lot bigger. It’s cheaper too, it’ll be like 400$ a month for a big bunker with a few outlets and stuff. 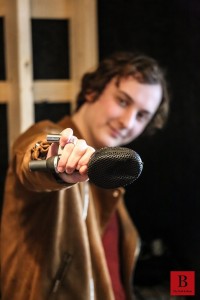 At first when we moved into this unit, the only person that lived above us actually worked at CJLO, so he was happy that someone was moving in to make a recording studio… Once people moved in downstairs, we started getting noise complaints. So now I need to start texting my neighbours to see if I can record on a certain day. It works right now, but it’s got to a point where some days they want to say ‘do you really have to record today?’ I mean we’re in a residential area so I’m the person who’s wrong. So I need to move all this stuff to a place where I can make noise all the time. That’s the big next step.

B&B: Well I guess there’s also something symbolic there when it comes to moving to a space that is actually for recording studios.

Spratt: Yeah, a commercial space. It makes it easier to sell to people too. I’ve had people arrive here before and say ‘Oh it’s an apartment…?’  I knew it wouldn’t last.

Spratt: Definitely [shoutout to] Patrick and the guys in Fleece among others. I don’t think I would have the confidence for this until I was able to play shows to real audiences and realize that people actually care. For example, when you post a piece of music online and realize that someone in the Netherlands buys it…it gives you this crazy incentive.

You can check out Colin Spratt’s band The Sad Birthdays on Bandcamp here.

Last week was a rough week for Demilitarize McGill. Any student who has been on Facebook in the last couple…