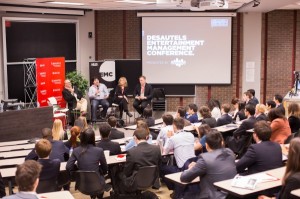 Desautels’ Bronfman building opened its doors to the unique and competitive world of the entertainment industry by hosting the first Entertainment Management Conference (EMC) from February 1st to 2nd. The conference welcomed over 200 students from all faculties at McGill as well as from Quebec and Ontario universities, such as Ryerson, HEC, UofT, and more. The two day conference began with a jam-packed day featuring guest speakers and panelists, including entertainment industry executives, CEOs and company representatives. The panel discussions were then followed by a case competition judged by EMC sponsor evenko.

The first day of the conference allowed the participants to learn about the different facets of the entertainment industry from some of the field’s most prestigious names. The keynote speakers included President and Co-Founder of Just for Laughs, Andy Nulman, and CEO and Founder of INK Entertainment, Charles Khabouth. The conference placed special emphasis on the music industry, branding and marketing, media, and events and festivals by featuring panelists ranging from IMC President Barry Garber, to Senior VP Production of Cirque du Soleil Charles Joron, to VP of Astral Radio Martin Spalding. The day concluded with workshops in networking and negotiating, which were then followed by a cocktail.

Post-cocktails, the conference rolled out its evenko-centered case competition in which students were divided into 36 teams. The teams were given less than 12 hours to crack the case, which called for the development of a feasible concept that connects the university student market with the evenko brand. The winning concept would actually be implemented by evenko. The teams were expected to call upon their creative energy by presenting the evenko judges with a student-directed campaign that had to stay within the constraints of a $5,000 budget.

Judge Dustin Moores explained that the team was looking to “see what evenko’s strengths and weaknesses are from the perspective of their target audience. [They] also wanted to see original ideas that will capture the attention of a large student body. The winning idea was ultimately the most feasible and well-organized.”

The offered prizes acted as great incentives to the participants; prizes for the runners-up included two tickets to an available evenko event of their choice. The grand prize included the opportunity to go behind-the-scenes as a “Roadie for the Day” and “Photographer for the Day” on the production of Bon Jovi’s February 13-14 shows at the Bell Centre. It was made clear that the winning team will be able to see and aid firsthand in the streamlined yet hectic production of a live rock concert, with each student having the opportunity to work with the crew backstage, interview the crew, and take photos as if they were the local press for the event.

The winning team came from a combination of Desautels and JMSB students. The group was composed of Desautels’ Manuela Gonzalez, U2 Management; Aylam Hofstein, U1 Management; Junyi Liu, U1 Management, as well as JMSB’s Anthony D’Urbano, U3 Marketing and Phillippe Ostiguy, U2 Marketing. Together they devised a social media platform that played to the concept of brand ambassadors that D’Urbano claimed “would personify the evenko brand on any university campus.”

When asked what differentiated his team’s idea from the others, D’Urbano spoke to the fact that his group’s plan stuck closely to the judges’ iterated criteria: “Ultimately, our concept was not the most original, but it was the most well thought-out. It was ready to be implemented tomorrow.”

Manuella Djuric and Sean Finnell, the Executive Directors and Co-Founders of EMC, spoke to The Bull & Bear regarding the extensive planning for the conference and their overall impressions of how it went.

They initially pitched the idea for EMC to the MUS Board of Directors in March 2012. “Everyone was really excited about the concept from the beginning,” says Finnell. Most of the research and planning began in September 2012, with the organizing committee devoting countless hours per week to EMC, especially in the weeks immediately preceding the conference. “It was a lot of hard work. We wanted to create an all around groundbreaking experience, especially because it was the inaugural year,” notes Djuric.

The organizing committee was thrilled with the outpouring of positive feedback they received from the conference attendees. “It’s a humbling experience in terms of the positive feedback we received. A lot of the participants came up to thank us personally,” finds Djuric. “It just made it all worth it,” exclaims Finnell.

Djuric and Finnell hope that EMC had a lasting impact on students, especially those seeking a career in the entertainment management industry. “One common theme from all the panels was having passion and valuing relationships. In this industry, a lot of it is genuinely wanting to do what you’re doing,” Djuric explains. “We’re very lucky nowadays that we don’t have set career paths. It’s good to know that this is another option that isn’t necessarily highlighted at McGill but is a very successful industry.”

The organizers would like to thank the Dean of Management’s Office, the McGill Bookstore, Jay Hewlin, Karl Moore, Sandiford Staff, Alumni Relations, Kathi Murphy, Robert Mackalski, Feldman and our volunteers, HéGarçon, Prep101, Peg Brunelle, the SSMU, Building Services, and founding partner evenko for their invaluable support. “We’d also like to thank our committee. They worked really hard and we’re very proud of them. We knew that it would be tough, and I hope that they will carry this on. I know they are now ready to conquer anything they set their minds to,” notes Djuric.

“Our goal from day one was to broaden people’s horizons in terms of the fact that everything in this faculty doesn’t mean you have to go work on Wall Street. You can use your degree to do something with regards to entertainment. There’s a fun industry out there where you can apply your studies to.”

In the past several months, our ability to connect with others and stay in touch with current issues has been…