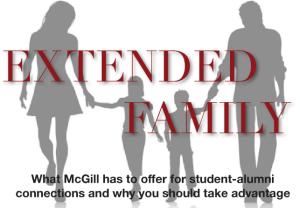 I am making my way through my final year at McGill and I have a problem: I’m being followed. Not followed in the sense of ominous trailing footsteps, but rather I’m being followed by a persistent, nagging voice in the back of my head. You know the one – the question that makes you want to avoid family gatherings, and when you hear it (and hear it you will!) all you can really do is nervously smile, only because it’s all too predictable and yet all too unanswerable. It has many forms, but here it is at its purest: “This time next year, what will I be doing?”

While this question will undoubtedly continue to be a constant, unwelcomed presence in our lives, there are ways in which we can better prepare ourselves to answer it. One of those ways is through building a connection with alumni who have already transcended the formlessness and dubiousness that is graduating and who can offer valuable insight into the process. In this regard we are lucky, as McGill offers a range of resources that help to connect current McGill students with alumni. Among these are services offered by the Development and Alumni Relations (DAR) office, the Student Organization for Alumni Relations (SOAR), and Career and Planning Services’ (CaPS) Mentor Program.

DAR serves as a link between McGill and its 215,000 graduates around the world, offering various opportunities to make connections with alumni. They provide funding for student groups to pursue community-enhancing projects, and will assist these student groups to reach out to relevant alumni to attend and speak at their events. They also host the ‘Backpack to Briefcase’ series, which has been on hiatus for the last few years but will be returning in March 2014. This includes alumni-led seminars and presentations on important post-graduate know-how such as dining etiquette and networking skills.

Temi Akinaina, who works for DAR in Alumni Relations and Alumni Career Services, emphasizing DAR’s role in maintaining a community amongst current and past McGill students.
“We host quite a few different events and programming to continue the relationship that alumni had while they were on campus, encourage lifelong learning, and essentially strengthen their ties and connection to the university,” she explained .

Another important branch of DAR is the Student Organization for Alumni Relations (SOAR), whose mandate is to “connect students past, present, and future.” They plan events such as James McGill’s birthday and Hockey Night for which they invite alumni to attend. “Having the ability to talk to people who have already gone through what you want to go through is really helpful because then you know what you have to do, you know what’s possible, and you know what other options are out there,” said Payal Patel, Co-President of SOAR. “It’s definitely motivating and they can teach us lessons that we haven’t had a chance to learn yet,” added Tara Sullivan, SOAR’s other Co-President.

Another important – and more direct – way in which McGill works to create a community between current McGill students and alumni is through the Mentor Program, run by CaPS. The program, which has around 1400 participating students and almost 850 mentors involved, pairs students with a mentor (i.e. a volunteer McGill alumnus established in their field) of their choice. The mentor and student are paired for a period of four months, during which they can communicate via email or meet in person.

Muhammad Omer Juma, the program’s coordinator, emphasized the uniqueness of the bond that can be built during the four months. ”You don’t get that personal with anyone you meet at the career fair,” he remarked. “Students should take advantage of that.”

A final way in which students can try to benefit from connections with and guidance from alumni is through the network of alumni and young alumni branches located around the world. These branches host a variety of events, some of which welcome current McGill students to join along, like the Boston branch’s ‘speed networking’ event.

While connecting with alumni is not a panacea for all of your post-grad anxieties, doing so can certainly help in getting your bearings. It is important to know and take advantage of these opportunities that unfortunately often remain lost in the fearsome depths of the CAPS newsletter and other listservs.

Akinaina strongly believes in the importance of these opportunities. “I think people who come to McGill didn’t come to McGill to be isolated. They came here for the opportunity to be part of the community, and I think that the alumni who give back by interacting with students certainly see it like that, but they also get something from it. It’s important for students both to see these opportunities before they leave and also to internalize them as things that are important for them to do as they move on.”

This article explores some of the major avenues for connecting with McGill alumni. If you would like to find out more about these and other opportunities, you can contact Tess Kelley, in charge of DAR’s Student Programs at McGill, at tess.kelley@mcgill.ca.

Friday, November 23rd was the day of MyVision McGill’s biggest event, the Social Innovation Summit. Designed to spread awareness about…