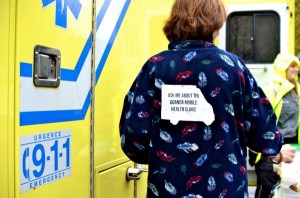 The government-funded Grand Challenges Canada grant program aims to support ‘bold ideas with big impact in global health.’ In 2013, five McGill professors were awarded the $100,000 prize for their innovative ideas relating to global health. Among these professors was Dr. Colin Chapman, who on Wednesday organized a fundraising event on campus involving a non-functioning ambulance and Ugandan products, such as jewelry and baskets, to help raise awareness and additional needed funds for his project.

Chapman is a professor of Primate Ecology and Conservation in the Department of Anthropology and the McGill School of Environment, but much of his career has been spent working in Uganda, where he is an Honourary lecturer at Makerere University and an associate scientist with the Wildlife Conservation Society.

His devotion to working in Uganda began in 1989, when he traveled to Kibale National Park for his post-doctoral research.  After working in the area for over 20 years, he came up with the idea of developing a mobile health clinic system operated out of a retrofitted ambulance.

“The project came about as a means of giving something back to the community that I had worked with for so many years and had been so good to me,” Chapman noted. “It was also a means to convince the local community that Kibale National Park had good things to offer them.”

Chapman’s latter point speaks to a major issue experienced by the Ugandan Wildlife Authority (UWA), which will be a joint implementer of this project. Kibale National Park is an extensive tropical forest containing over 70 different species of mammals. Huge efforts have already been made to ensure conservation of the forest and its inhabitants. This includes bans on extraction and poaching, but there are often difficulties enforcing them. “It is often difficult to justify these bans to the population living around the park when elephants occasionally come out of the park and destroy 50 percent of [their] crop,” Chapman explained.

In order to address the issue of disillusionment in the face of conservation when events like this occur, as well as to address basic health care needs in the community surrounding the park, Chapman began the Kibale Health and Conservation Project by building a centre to provide reliable health care and outreach education. While this centre has provided health care to approximately 7,200 people living in the immediate area, it is still inaccessible to a large number of people due to infrastructure and distance from population centers.

This is where Chapman’s Grand Challenge project will step in: his mobile clinic will provide basic health care, family planning, medical education, including nutrition and sanitation, and conservation education as it travels around the area on a fixed schedule. The grant covers the cost of the ambulance, which has already been purchased, as well as transportation costs from Canada to Uganda.

The funds raised on Wednesday will go towards operating costs, such as income for educators and nurses, which are not covered by the grant. If the project proves to be a success in terms of improving conservation and providing health care, Chapman will be eligible for a second phase of the grant, in which he would receive $1 million to purchase 20 ambulances that could cover a much wider area across Uganda. The UWA has also agreed to pay for the cost of diesel and the salaries of the driver and nurses if Chapman receives this second phase of funding.

Chapman’s project certainly meets the Grand Challenges criteria of being a bold idea with big impact.  “By having a mobile clinic system it should illustrate to the community and hopefully the government that the world thinks the parks are important and should be preserved,” he asserted. Conservation becomes more important to people and they have greater access to health care – a definite win-win if the project is successful.

While his Grand Challenges Grant has helped to transform his idea into a reality, Chapman emphasizes the role the McGill student body has played in its realization. “This project and the Kibale Health Clinic that currently exists could not exist without the hard work of the students of McGill,” he stressed. “They deserve a lot of thanks.”

In preparation for this year’s Fantasia Film Festival, I looked over my coverage from last year and was utterly shocked…