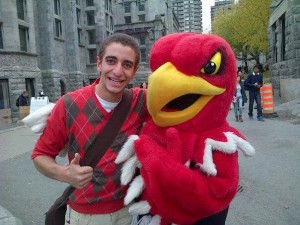 The highlight of current Inter-Residence Council (IRC) President Kareem Ibrahim’s campaign was his YouTube video entitled “Vote for Kareem Style.” The video featured him dancing at all McGill residences in a blue morph suit and received over 6,000 views. It ended with the slogan: “Make true your dreams and vote Kareem, IRC 2012 will be supreme!” Under his leadership, IRC seems to have lived up to this promise.

In previous years, IRC’s efforts were mostly unseen beyond their first event of the year. In comparison, this year’s council has already held three sold out club events for first years, along with an array of other successful initiatives. The council attributes these strides to improved communication with students in residence through the use of social media and residence representatives.

The feedback from a recent survey reflects the success of IRC’s actions: 88 percent of surveyed students felt informed of events, and only 8 percent were not fully satisfied by the IRC events they attended. While the response was mostly positive, the council also identified a need to provide more events for a wider audience, not just those interested in club events. As a result, the council held an arts gala and is in the process of planning another coffee shop along with other residence-wide activities.

The council consists of twenty-seven members, with a seven-member executive and two representatives from each of the ten residences. There are also two advisory members of IRC who served on the council in the past. “The true heart of IRC lies within the twenty representatives from each residence,” explains Ibrahim. “Without them, our frequent communication and collaboration with each residence would be next to null.”

This year’s council is a coherent group, with Ibrahim stressing the importance of team cooperation. “It can be said with confidence that the overall goal of everyone on IRC is not only to fulfill their position passionately and adequately, but to also lend a helping hand to other IRC members when necessary to ensure that our goals are consistently met.”

The IRC budget also funds the Environmental Residence Council, which coordinates events in residence that encourage sustainability, such as “Fight the Power,” an energy reduction competition between residences. The council has also created ties with the Food Representative Council, a committee that connects students to Food and Dining Services.

Ibrahim was involved in student government prior to McGill, serving as the Student President of Earl of March Secondary School in Kanata, Ontario. Through this involvement, he became hooked on leadership. “Representing my peers, playing an important role in organizing events, and doing everything else that any form of student government does is largely my passion,” says Ibrahim.

Therefore, upon arriving at McGill, Ibrahim was eager to participate in student government. “I aimed to get my name out there and meet people above all else,” he admits. In Ibrahim’s view, this strategy accurately represented how he would be in office. “The amount of time and energy that I invested in those things helped further my campaign by providing people with a direct example of how I would be committed to the position the same way I was with the campaign.”

For the rest of the year, IRC looks forward to holding a variety of events, including a campus-wide Capture-the-Flag, another coffeehouse, and a picnic. The council also plans to work in conjunction with other groups on campus, such as with Youth Action International for their upcoming “recyclathon” event.

Looking forward, Ibrahim hopes that this year’s gains will not be lost and that the strong reputation of IRC will continue on. “My greatest hope is that we can pass down all the things we learned this year and the different resources we managed to tap into. With the insight that IRC will have accumulated over the whole year, from successes to failures, we can allow next year’s IRC to start off on the right foot and begin creating their own legacy.”

In terms of his own political future, Ibrahim is looking to stay involved on campus, though he is not certain through which outlet yet. “The future is full of opportunities, and it’s for that reason that I am completely comfortable not knowing for sure what it is I would like to pursue next year, or even the year after.”

For now, Ibrahim is just happy to have been this year’s IRC president. “I can confidently say that IRC has been the most enjoyable experience I’ve had all year – working with such committed and compassionate people doing something you enjoy is incredible, to say the least.”

Update (March 14): Ibrahim is currently running for the position of AUS VP External.

Make sure to keep in touch with IRC this year through Facebook (www.facebook.com/McGillIRC), Twitter (www.twitter.com/IRCMcGill), and e-mail (ircmcgill@gmail.com).