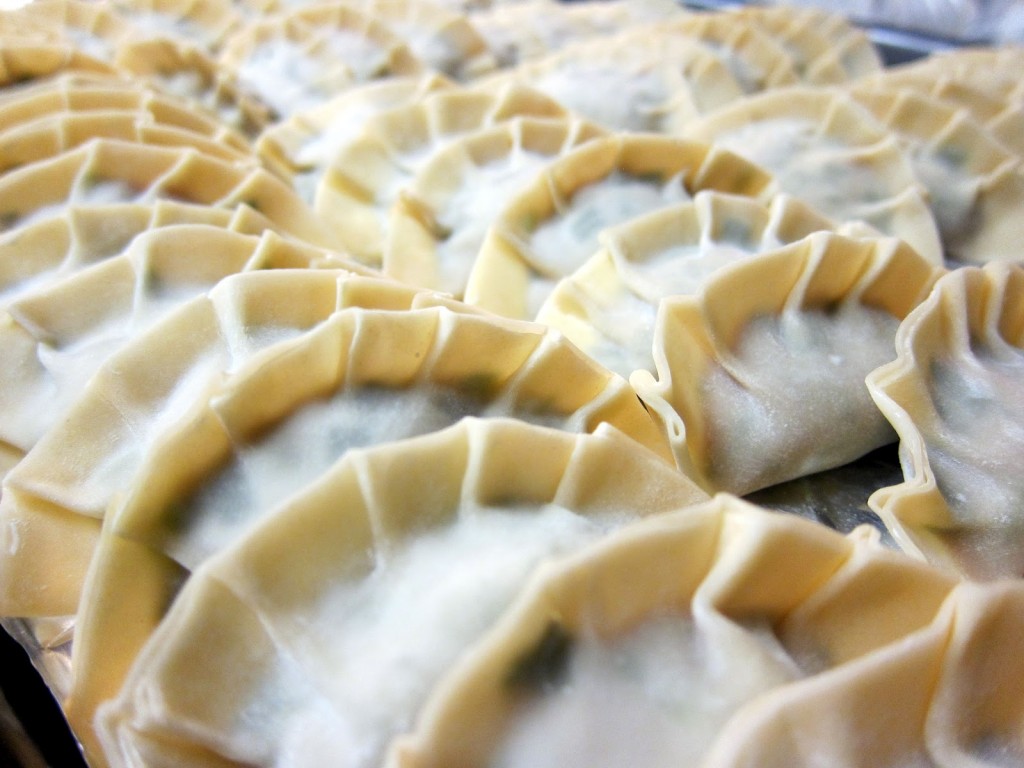 If your year has not been going as well as planned, you have a second chance. January 31st marked the beginning of Chinese New Year, or the Lunar New Year, for 2014. It is an important Chinese holiday that spans a period of two weeks, celebrating the turn of the Chinese calendar while honouring deities and ancestors. ‘Family’ is at the heart of Chinese New Year traditions and festivities; the entire family will thoroughly cleanse their home in order to sweep away any ill fortune of last year and to make way for good luck in the New Year. Other activities include fireworks, late-night games of mahjong, and catching up with distant relatives, but the best part, in my opinion, is the food.

Feasting is mandatory, and in my family, homemade dumplings are a Chinese New Year staple, and they appear on my dining table every year without fail. Dumplings are traditionally eaten on New Year’s Eve and symbolize wealth because they are shaped like ancient gold and silver coins.

There are many types of fillings you can stuff into the dumplings, but the classic dumpling is filled with a blend of ground pork, chopped Napa cabbage, water chestnuts, green onions, and shrimp. However, ground beef with onions and cilantro is also very delicious choice. For the vegetarians, never fear, you can make a meat-free alternative with tofu, Napa cabbage, green onions, ginger and assorted mushrooms. The filling is then wrapped in store-bought dumpling wrappers (you can make your own if you’re feeling adventurous) and sealed with water. The ingredients for homemade dumplings can be easily acquired with a trip to Chinatown.

The traditional method of cooking dumplings is to simply put them in boiling water, and when the dumplings float to the surface, they are ready to be devoured. However, pan-frying them in a little canola oil is also a great way to yield some mouth-wateringly crisp dumplings. Dip in a concoction of soy sauce, red vinegar, sweet chili sauce, and peanut butter to bring out the maximum flavor of the dumplings.

To give your dumplings some extra flair, you can wash some dimes thoroughly with vinegar, boiling water, and baking soda, and wrap it in some of the dumplings. The lucky ones who get the coin in their dumpling will receive good fortune for the year. Just be sure to inform your guests beforehand, so they don’t swallow the dumplings whole!

If dumplings don’t rock your boat, perhaps a steamy aromatic hot pot is more your style. While traditional hot pot requires people to cook their own ingredients at the table, most people may not have a portable gas stove, so this method works like a charm. Throw everything you love including meat, seafood, fish balls, noodles, vegetables, mushrooms, and tofu in some delicious broth and just boil to oblivion. Take the pot to the table and let everyone dig in. A steaming hot pot on a cold winter night eaten alongside some ice-cold beers is how you feast like a king.

Lastly, there would be no Chinese New Year without the signature tangerines that pops up around this time of year. Tangerine season typically ends around January, and the Chinese believe oranges bring wealth and good luck. This belief stems from the fact that the Chinese word for orange and gold sounds similar to the word for luck. Aside from that, we all know that a couple more citrus fruits will give you that vitamin boost to combat the dreaded flu season.

Regardless of the food, Chinese New Year is really about getting together with your family and spending quality time together. Sharing is caring, and food just tastes better when you eat it together with people you love.