When Provost and Vice-Principal (Academic) Christopher Manfredi announced the Action Plan to Address Anti-Black Racism 2020-2025 would be released on September 30, SSMU President Jemark Earle and other members of McGill’s Black community were surprised.

“We felt the September 30 timeline was really quick, and it’s evident [in the plan] that it was,” Earle said. “There are concrete points, but … there were a lot of things that we had asked for in our consultations that either weren’t addressed or were addressed in a way that wasn’t what we were asking for.”

The plan was the culmination of months of meetings between senior administration, primarily Provost Manfredi and Assistant Provost (Equity & Academic Policies) Angela Campbell, and members of McGill’s Black community, including the Black Students’ Network (BSN) and the Dr. Kenneth Melville McGill Black Faculty Caucus. It was also the result of years of pressure from McGill’s Black community for concrete administrative action towards making the university more inclusive.

Split across five categories – student experience, research and knowledge, outreach, workforce, and physical space – the actionable items in the plan vary in detail and timeline, with some items already underway and others framed as goals for 5 or 10 years in the future. Some prominent actionable items include an online anti-racism module for Fall 2021, the hiring of more Black professors to a goal of 40 Black tenure-track/tenured professors by 2025, and the pledging of 15 million dollars to the plan as a whole over the next 5 years. 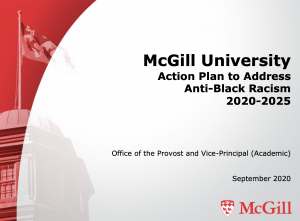 The Action Plan to Address Anti-Black Racism was shared with the McGill Community on September 30 by Principal Suzanne Fortier, who called it a renewed “commitment to equity and inclusion.”

The document also includes the hiring of a pedagogical developer within Teaching and Learning Services (TLS) by Spring 2021 for professors to develop “inclusive pedagogies and curricular approaches that foster … a sense of belonging for all students.” The program is voluntary, but Campbell says that “professors have not thought critically about how to ensure their curricula reflect diversity” and is optimistic that they “want to do more and want to do better.”

Not included in the plan is a decision on the statue of James McGill on campus, which many wanted removed due to James McGill’s slaveholding history. According to Manfredi, the administration will make a decision by March 2022 on the most suitable location for the statue. He referenced the research of the Working Group on Principles of Commemoration and Renaming, which reported that taking down statues and renaming things wasn’t necessarily the right thing to do and that the important thing to do was to contextualize them. Campbell added that they had heard from students who identified priorities higher than moving the statue and that they wanted to hear multiple perspectives before coming to their decision.

Manfredi and Campbell stress that the plan is just the beginning of a years-long commitment to address anti-Black racism at McGill, and that they will continue to meet regularly with the BSN and other members of McGill’s Black community to learn what can be improved and what can be expanded upon.

“We’ve committed to make this a living, dynamic document,” Manfredi said. “This isn’t something that’s been etched in stone that’s never going to change … it’s going to evolve over time as we interact with the community to determine how well we’re meeting our objectives.”

This sentiment was echoed by BSN President Heleena De Oliveira, who emphasized that there are things that still need to be addressed by the university and that the plan itself is “a bit aspirational.” She believes that the administration needs to write another, more detailed plan for implementation. 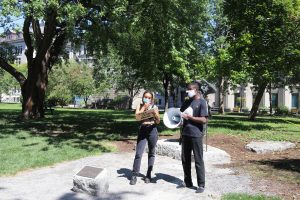 “The plan isn’t perfect by any means,” De Oliveira said. “The most important thing about this plan is that it requires constant readdressing. The plan talks about end goals and not how to achieve them; more significant details need to be added into a separate plan. There are things that are promising, but there are definitely areas that need improvement.”

With a variety of actionable items and aspirational goals set by the university, there is a question of what will happen moving forward and how those items will be implemented. When asked how the administration is going to be held accountable for ensuring the goals are met, Campbell mentioned the university is going to be hiring a project manager to oversee the process.

“It’s really an important piece of work and we want someone dedicated fully to that oversight to keep the university on track,” Campbell said. “It’s a collective process to hold the administration accountable.” Manfredi shared this sentiment, saying that “it’s important that we all hold ourselves accountable,” and that we “make sure we’re doing our part.”

Yet, De Oliveira and the BSN, who have been spearheading efforts to force institutional change for years, are concerned about who will shoulder the burden of implementation and accountability.

“At the end of the day, the burden of implementation will fall on Black students and faculty,” De Oliveira said. “That’s the reality of it. It’s important that we’re compensated for that time, and moving forward I hope to see the administration compensate and acknowledge the work done by the Black community at McGill.”

“We’ve already put so much emotional labor and time into [the plan] so we don’t really want to give any more of it,” Earle said. “At the same time, if we don’t do it then it’s going to be the upper administration who is going to do it … but knowing McGill, I don’t have much faith in all these things being implemented smoothly.”

At the end of the day, the burden of implementation will fall on Black students and faculty.

Earle and De Oliveira’s sentiments are reflected in a statement the Dr. Kenneth Melville Black Faculty Caucus published on August 1. In the statement, the caucus outlines specific actions they want the university to take and emphasizes that this responsibility cannot always fall on the Black community.

“McGill has an opportunity to lead in confronting and uprooting anti-Black racism. Black excellence and perseverance alone in the face of unmitigated systemic anti-Black racism cannot ensure that Black faculty, staff, and students will be treated equitably and with dignity. … McGill should cultivate a relationship in which members of the Black professoriate, alongside staff and students and alumni, are able to trust that substantively we are respected, valued members of the University community.”

To mitigate these concerns about implementation and accountability, De Oliveira and the BSN are working on other methods of holding the university responsible, by broadcasting summaries of the BSN and Black Faculty Caucus’ demands online and by speaking with external news sources.

“I really have to give it up to BSN for not letting this fall,” Earle said. “I’ve learned that students can do a lot and change can happen, we just have to stick together as a community and support each other. We need to make sure that we as Execs, whether that’s SSMU or another faculty, aren’t stepping on the toes of the people who are actually doing the groundwork. We need to use our positions to boost them up. It’s not about us, in this scenario. I think that’s something I learned personally; me being a Black president – it’s not about me – it’s about the community.”

De Oliveira agrees, and says she looks forward to working with McGill’s Black community over the next year to make sure their goals and needs are met.

“We all have the same goal,” De Oliveira said. “Respect and equity on campus.”

An underperforming housing market is usually an indicator of a country-wide recession, as emphasized by a research report recently released…