“I had a misunderstanding with a white classmate, he got angry … He said: ‘You left Africa to come to Canada because you were running away from all your problems. Go back to your country, you all look like apes.’”

This experience from a Desautels Faculty of Management graduate student is one of over 150 similar accounts posted to Untold Mcgill, an Instagram account which shares anonymous experiences of systemic oppression and racial discrimination at McGill. Upon seeing the number of posts incriminating the Faculty of Management, a group of students formed BIPOC (Black, Indigenous, and People of Color) Desautels to represent racialized Management students and to call for systemic and sustained changes in the Faculty.

According to a representative for BIPOC Desautels, the experiences detailed in these posts “confirmed that our individual experiences of racism in the Faculty were not anomalous, but rather symptomatic of the institutional racism entrenched in the Faculty.”

The posts, as well as the momentum of the Black Lives Matter movement, inspired BIPOC Desautels to write an “Open Letter to the Desautels Faculty of Management,” published July 30 and signed by over 600 McGill students, alumni, and organizations. In the letter, BIPOC Desautels compiles posts from Untold McGill and individual statements of racialized students in Management, emphasizing that these stories are “symptomatic of the institutional failures of the Faculty.”

The open letter details six demands of the Faculty of Management as a whole, including a five and ten year anti-racism plan, anti-racism curriculum revision, and addressing problematic Faculty behavior. The letter also demands that the Management Undergraduate Society (MUS) increase their equity infrastructure and the representation of racialized students in leadership positions.

BIPOC Desautels reflected on the impact they want their open letter to have on the McGill community, writing: “We hope that White students reflect on how much racism they noticed before Untold McGill and before our Open Letter; that they recognize the amount of unpaid BIPOC labor (physical, emotional, and mental) that goes into these efforts; that they reflect on the ways they support and protect the BIPOC community on campus; and that they are encouraged to start reaching out, offering their time, and committing themselves to anti-racism.”

To other BIPOC students at McGill, we hope that our letter serves as a reminder that your experiences of racism and bigotry should not be the status-quo.

The BIPOC Desautels statement comes days after the publication of “Take James McGill Down,” another open letter aimed at systemic anti-Blackness at McGill University as a whole, specifically highlighting the slave-holding history of the university’s founder, James McGill. Signed by almost 1,000 students, alumni, and organizations from all over Canada, the letter asserts that “we—outraged students, faculty members, staff, alumni, and community members—continue to be disheartened by the University’s refusal to acknowledge the central role of slavery both in its creation and its preservation of systemic anti-Blackness.”

The same day that the Take James McGill Down open letter was published, Professor Charmaine Nelson, Phd. and students released a 97-page report titled “Slavery and McGill University: Bicentennial Recommendations.” The report, dedicated to the Black and Indigenous people enslaved by James McGill, explains James McGill’s slaveholding history and how the university profited from and was built by transatlantic trade and slavery. The report also outlines recommendations for McGill to take in recognizing this sobering history in light of the university’s 200th anniversary in 2021. 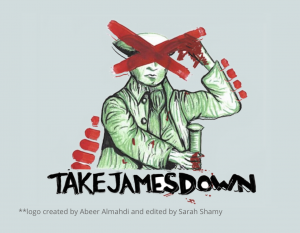 From the Take James McGill Down website, this graphic by Abeer Almahdi and Sarah Shamy illustrates the campaign’s primary demand.

Ayo Ogunremi, SSMU VP External and one of the authors of the Take James McGill Down open letter, called the report “a groundbreaking document.” The importance of this historical context is emphasized in the letter, which states: “It is anti-Black, intellectually dishonest, and immoral to separate the University—an institution founded on account of James McGill’s wealth, politics, and deprivation of enslaved Black and Indigenous peoples’ liberty—from the legacy of the man whose name it bears.”

The open letter and Dr. Nelson’s report were quickly followed by the Take James McGill Down campaign, which aims at removing the statue of James McGill on the campus lawn and replacing it with a monument commemorating those enslaved by McGill. Spearheaded by the McGill Black Students Network (BSN), the campaign began on August 1 with a protest held in front of the statue, and will continue in the form of a media takeover by members of McGill’s Black community.

“The demands in the open letter are demands Black students and the BSN has been making since the 1970s,” BSN’s President Heleena De Oliveira said. “It’s the cumulative experience of Black students at McGill and systemic racism that have caused those demands to be called for. [Our campaign] doesn’t stem from one specific event, it stems from the black experience at McGill.”

Yet, since the publications of the open letters several weeks ago, neither BIPOC Desautels, Ogunremi, nor De Oliveira and BSN have heard from the McGill administration regarding their demands.

“The Faculty [of Management] has not reached out to us directly yet,” BIPOC Desautels said in an email. “Historically, the Faculty has not stepped up and addressed issues of racism, homophobia, and sexism … we remain hopeful that the Faculty will finally enact the necessary changes to make Desautels a more welcoming place, but the historical precedent of this institution is a sobering reminder of the Faculty’s willful ignorance.”

While both open letters’ demands are long-term and will take years to implement in any capacity, Ogunremi and De Oliveira hope that their campaign will be able to remove the statue of James McGill in the immediate future. 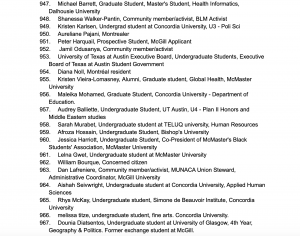 A small number of the almost 1,000 signatures on the Take James McGill Down open letter, composed of people from McGill, Montreal, and all over the world.

“Many, if not every single demand, are not demands that the university wants to fulfill or implement,” Ogunremi said. “I hope that in winning the campaign to get the statue removed, Black students and their allies will develop a political education with respect to what it will take to force the hand of the university to do things that they don’t want to.”

However, McGill University told Global News that “there is no plan for [the statue’s] removal,” a statement that Ogunremi calls “a slap in the face and a demonstration of contempt.”

The only other statement from the university regarding the open letters and Dr. Charmaine’s report was the addition of a brief addendum on James McGill’s biography stating “He also owned enslaved people, a fact our University acknowledges and that calls for greater scrutiny.”

Yet, this clause does not even begin to address students’ demands, Ogunremi suggests, adding that the clause “does not also acknowledge that he traded human beings as slaves or that he profited off the products of the labor of enslaved people.”

De Oliveira echoed Ogunremi’s frustration with the lack of concrete action from the McGill administration.

“[If] there’s ever a time for McGill to become a campus in a space that’s safe for everyone, it’s now,” De Oliveira said. “I hope they understand how Black students have been suppressed and made inferior on campus because of the negligence of the governing body of McGill. I hope that people understand we can no longer accept excuses. We want this to be the last time we have to do this.”

Today at 2:00 PM, McGill students, professors, and Montreal locals alike came out to demonstrate in solidarity with the pro-democracy…