In the early hours of July 18th, the Toronto Raptors and the San Antonio Spurs of the National Basketball Association (NBA) agreed to a trade involving all-stars Kawhi Leonard and DeMar DeRozan. Leonard, who has just one year remaining on his current contract, requested a trade from the Spurs after playing just nine games this past season due to what he believes to have been a mismanaged injury. Despite the medical clearance given by the team’s doctors, Leonard felt that he was not yet ready to play, and consequently took over control of his rehabilitation, while abandoning his team in the process. There were very few details made public, so fans were left to speculate whether it was simply a mismanaged injury, or something more, which caused this rift between Leonard and the Spurs. Leonard’s teammates fought hard all season long, hoping that he would soon return to the court, but just as playoffs were set to begin, Leonard was ruled out for the post-season and the Spurs would be going against the monstrous Golden State Warriors without their captain. 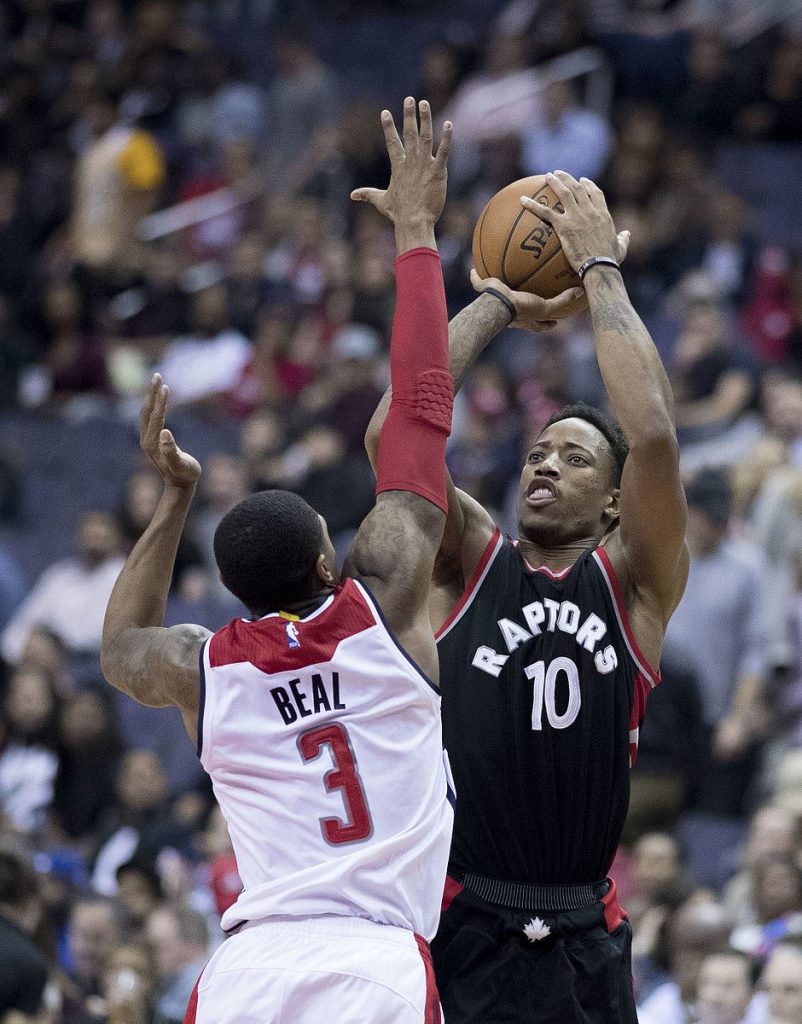 When it was announced that Toronto would be shipping out their franchise player, this monumental move drew different reactions from Raptors fans. Some were sad to see the organization deal their best player, and others were ecstatic  to find out he would be replaced by the defensive star the team so badly needed. Taking a deeper look into the trade, it makes a lot of sense for the Raptors to swing for the fences and acquire a superstar like Leonard. As a top team in the Eastern Conference, the Raptors have failed to reach the finals in the past five seasons. Leonard is more talented than any player in Raptors history, and if all else fails, the contracts being signed in this deal fit perfectly into Toronto’s back-up plan to self-destruct before 2020. This, along with the considerably low asking price for a superstar player, make the Leonard-for-DeRozan trade a low-risk and high-reward gamble for Toronto.

DeMar DeRozan and Kyle Lowry have led the team for the last five years, and while they consistently exceed expectations in the regular season, they’ve never been able to solve the problem that is (or was) LeBron James in the playoffs. Going back to 2016, the team has lost ten consecutive playoff games to James’ Cavaliers, who ended the Raptors’ playoff runs in a demoralizing fashion year after year.  This indicated that while this core has been the most impressive Raptors team to date, they just might not be good enough to win the franchise its first championship. Until this season, the team’s high-ranking offence would regress to a predictable, easy-to-defend isolation style every post-season. This made it a lot easier for high-IQ teams, particularly those led by James, to pick the Raptors apart – especially when playing against them four times in ten days. The team continuously ran it back, returning with the same core year after year, hoping that the group could raise their ceiling if given another opportunity. Unfortunately, they repeatedly fell short. After last season, the most impressive and successful in franchise history, the Raptors once again exited the playoffs by a sweep at the hands of the Cavaliers. The team had been given five years to try and progress, and with three of those years ending in a post-season sweep by the Cavaliers, it was time the Raptors management understood that this core was not built for a championship.

As a top team in the Eastern Conference, the Raptors have failed to reach the finals in the past five seasons. Leonard is more talented than any player in Raptors history, and if all else fails, the contracts being signed in this deal fit perfectly into Toronto’s back-up plan to self-destruct before 2020.

Having come to this discovery, the Raptors needed to make a move. They simply could not return to training camp in the fall with the same roster, yet they didn’t have the money to sign a marquee free agent. Their first move of the offseason was to fire their head coach, Dwane Casey, who would go on to win the NBA’s Coach of The Year award just weeks later. The decision to send Casey home  may not have been entirely based on his coaching abilities, but rather a statement move on behalf of the organization to show their fans and players that individuals would be held accountable from this point on. In the era of star-studded teams, the Raptors were without a true superstar, and were overpaying for the two all-stars on their roster. They were a respectable team, but couldn’t push themselves to greatness without a go-to, playoff-proven talent to lead the way. So, when opportunity presented itself in the form of a black and silver #2 jersey, Toronto couldn’t help but engage in trade talks for Leonard. After all, the Raptors have never had a player as talented as him on the roster. In the team’s 23 years of existence, Toronto has never had a player who finished higher than 7th in MVP voting, nor has one of their players ever made an All-Defensive Team or All-NBA first team. In just one season, Leonard checked all of those boxes: he finished second in MVP voting, was selected to both the All-NBA and All-Defensive first teams, and he won his second Defensive Player of the Year award in the 2015-2016 NBA season. At such a low asking price, and being in a position where the management knew what to expect from the current roster, a move like this helps them take a step forward and elevate their ceiling, even if it is for just one year.

It’s clear that this trade has the potential for a great reward, but equally important is the incredibly low risk it poses. It fits perfectly with the Raptors’ scheduled rebuild, should Leonard choose to leave after his first year as a Raptor. Following the team’s sweep at the hands of the Cavaliers in 2017, Raptors President Masai Ujiri opted to not rebuild, and instead decided to set the team’s window of championship contention to three years. He negotiated contracts such that all of the team’s most expensive contracts expired at the same time, and if at that point in time the Raptors had not advanced, he could let all of those players walk and start the rebuild. He re-tooled the roster with the future in mind, replacing veterans like Cory Joseph and DeMarre Carroll with young players in Fred VanVleet and OG Anunoby. Taking on the expiring contracts of Kawhi Leonard and Danny Green – another player who was also included in the deal – gives Toronto the option of continuing to compete with those players on longer term deals, or letting the former-Spurs walk, which would remove roughly 30 million dollars from their payroll. If Leonard stays past this year, the Raptors win big and surround the young star with talent to continue competing. Should he leave, they’re right where they wanted to be (and a year earlier at that.)

It’s always going to be difficult to wave goodbye to the face of your franchise. But welcoming a top five player is sure to make it easier. Having a player of this calibre is new to the Raptors and they’ve already seen what their DeRozan- and Lowry-led team was capable of. With that being said, the trade fits their timeline and costs them very little, with the potential of providing great return. In a league where star-power wins championships, you would have to imagine that the Raptors management looked at this trade, weighed their options, and said, “Why not?”

This article contains spoilers for Breaking Bad, Suits, House of Cards, and The Office. I watched an astonishing amount of TV…