Mathieu Lauzon-Dicso, co-owner of the bilingual bookstore Librarie Saga Bookstore, has a lot on his plate. In the past few years he has been teaching French at Marianopolis College, coordinating the Prix Horizons Imaginaires (the first science fiction/fantasy literary prize with a jury made entirely of cegep students), and running the Science-Fiction and Fantasy media review site Horizons Imaginaires, now known as Imaginatlas. Now, he is becoming even more involved in the Montreal literary community by opening his own bookstore. With a pop-up store which launched at 5835 Sherbrooke on January 18th and a proper opening planned in May, Saga seems to have a bright future ahead of it. Now that his bookstore is open, I sat down with Lauzon-Dicso to discuss the process of founding a bookstore, and his views on the Montreal literary scene.

The following interview has been edited and condensed for clarity.

The Bull & Bear: How long have you been involved in the Montreal literary scene? Do you remember the first event you attended?

Mathieu Lauzon-Dicso: Yes. This started when I created Horizons Imaginaires. Before, I was simply teaching, but I didn’t really know anyone in the literary scene. Back in spring 2016, I had a few students interested in creating a French scifi/fantasy book club at Marianopolis. After a few weeks it became something bigger, and we went on to create an award: the Prix des Horizons Imaginaires. During the process of researching to make sure there were no other prizes like it, I started getting in touch with a few people. I met with some of them over coffee in the spring and summer. Those were my first steps.

B&B: How big is the literary scene in Montreal itself and how many events take place elsewhere in Quebec?

ML: There are a lot of things going on all over Quebec. Almost every night there are events in Montreal. Every day after 5pm there is something. The best way to know what is going on is to follow a few organizations, like bookstores, and see what kind of events they are planning. At the same time, during the scene itself, there are a lot of familiar faces you will see at every event.

B&B: Would you say the Montreal literary scene is mostly anglophone or francophone?

ML: I think the francophone scene is much bigger in population — and organization-wise, there are more publishers and writers in French so there are more events. In English, it is a smaller but close-knit community around a few organizations, like the Quebec Writers’ Federation. I think more people support them, since there aren’t so many events. What I feel we should do is bring more Anglophones into the French events, so they can see that there is so much more going on, but also allow Francophones to come into the few English events, so they can realize that there is an English cultural local community in Montreal. We should stop having such a strict linguistic divide, it makes no sense. That is why Saga is going to mainly be hosting bilingual events. 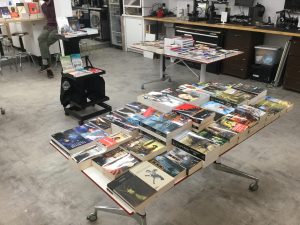 B&B: Do you feel like there are separate scenes for genre fiction (scifi/fantasy/etc) and non-genre fiction, or do all the authors/players in the industry mingle together?

ML: It’s kind of weird, I feel like there has been a bit of both. There are distinct scenes for scifi and fantasy, with people you would not find in the literary scene, and vice-versa. However, there has been more mingling and mixing that started a couple years ago. Some people — including me — started organizing events, and it started bringing people together. That affects more than just the events: when you bring people into these new scenes, it affects what they will create. I think Quebec, especially the scifi/fantasy scene, is starting to have a mini scifi/fantasy revolution, with stories being published that push the boundaries of what is considered scifi/fantasy versus what is regular literature.

ML: If I could bring this to a different angle, we picked NDG as the neighbourhood to open our bookstore because it is a big bilingual neighbourhood with no bookstores. There are stores that specialize in used books, but there is no one around here who sells new books. When you don’t have a store providing new books in your neighbourhood, you are missing out on a lot as a community. You can’t have new writers come in and hold activities. This neighbourhood is an amazing cultural space, with a very community-oriented population, and I thought I should open a bookstore if there isn’t already another independent bookstore in the area.

B&B: How many years did it take between the conception and opening of Saga?

ML: My husband Ilya and I are working together on this project. We started talking about it seriously in the fall of 2018. We wanted to build a harmonious space where we are both happy to spend time and work.

B&B: What is Saga’s place in the literary scene, in terms of genres and languages you carry?

ML: Saga will be carrying new books for all kinds of genre fiction: science fiction, fantasy, romance, mystery novels, etc. The whole store will be bilingual. Our current pop-up bookstore does have some used books, but that is only temporary. Our main goal with this bookstore is to make a cultural gathering space for people to meet others with the same interests and find the books that they actually love, instead of being relegated into a section at a larger store. This hasn’t been done before: the last scifi bookstore in Montreal closed in 2000.

B&B:  Will Saga be carrying a lot of Montreal/Quebec-published books? From where does Saga buy books?

ML: Saga buys books through distributors, just like all the independent bookstores. Distributors are the ones who receive books from publishers; they are the middle men in this transaction. They will have accounts with every store, and you always receive the new stuff they have in stock. Saga will be carrying books from all of the major English-language and French-language Quebec publishers. We will also have local publishers from the rest of Canada: Ontario, the Maritimes, and so on.

B&B: Will Saga be carrying magazines/anthologies like Boréal, or will it just be books?

ML: Yes. We will for sure have literary magazines like Solaris, a science-fiction magazine. There will also be some independent magazines like Brins D’Éternité, and we will be getting specialized English magazines, too. We will have the American scifi magazines and any independent English ones we find here, but we won’t have any regular magazines or newspapers.

B&B: Besides selling books, is there anything else you want to accomplish with Saga?  For example, will Saga be hosting readings or other literary networking events?

B&B: What has been the best part of working to open Saga so far?

ML: Hm, that’s tough. I think I have to say the human interactions. We opened up the pop-up store two weeks ago, and I’ve been meeting a lot of people. I love getting to talk to people, and seeing the reaction from the NDG community has been amazing. There are so many excited people, and all these little surprise encounters confirm that we are doing the right thing.

B&B: Are there any independent bookstores, maybe also used bookstores, besides Saga, that you would recommend in Montreal?

ML: There is this one bilingual bookstore called Librairie Bertrand in Old Montreal that not a lot of people have heard of. It’s inside an old stone building, it’s a beautiful space that is very warm and inviting. They have a good selection of tourist guides, but they have a good selection of literature too. My favourite French bookstore is La Librairie Du Square on Carré Saint Denis. It is a very small bookstore, maybe 700 or 800 [square] feet. They are specialized in French Quebec literature, and they have an amazing poetry section. Then there’s L’Eugélionne near Beaudry metro station. They are Montreal’s feminist bookstore, and an amazing place. They carry French and English books by women for all ages, from children to adults. They have a lot of voices that you would not find elsewhere. Then the last one is an important new community bookstore: Librairie Racines up in Montréal Nord (https://www.facebook.com/racinesmontreal/). It was opened by Gabriella Kinté when she found out there were no bookstores in Montréal Nord, and she created a bookstore that sells books by writers of colour. There are a lot of communities, and it has become an institution already. It is a beautiful project. If you are already there or if you are interested in literature you would not find easily elsewhere, that is the place to go.

B&B: If someone wants to connect with the Montreal literary scene, are there any events/festivals you would recommend?

ML: For the bigger festivals, on the first weekend of May both the Congrès Boréal and the Blue Metropolis Festival are taking place. The Congrès Boréal is the Quebec science fiction and fantasy convention. It is going to be at UQAM’s Coeur de Science on Sherbrooke. The Blue Metropolis is a huge literary festival, with a lot of the activities happening at the Hotel 10. It is an international festival with local and international writers, and it will have events in English, French and Spanish. It’s a place to go to and feel what is going on in the Montreal literary scene: everyone is there. Then, of course, there is the Salon du Livre de Montréal. It is the third week of November, and this year for the first time it will be at Palais des Congrès. It is a huge book fair, with every French publisher, and hopefully more and more English people visiting. If you [can] leave that space [without] a book, there is a problem with you.

It’s Friday afternoon. The week is finally ending, and you’ve braved your way through the 5-day storm of a midterm,…