Karys Peterson-Katz is a poet, an artist, and a McGill student in U2 honours cognitive science. She recently self-published a collection of poetry entitled “Soft Girl” that explores her struggles with love and mental health. The Bull & Bear had the chance to sit down with her and discuss her writing.

Bull & Bear (B&B): Can you take us through why you first began publishing your poems online, and why you decided to create a self-published collection?

Karys Peterson-Katz (KPK): It originally started as a project when I was entering high school. At the very beginning of the year, I decided to do a personal project where I was writing one poem a day for a year, and I actually managed to write 365 poems in my first year of high school. The transition from elementary to high school was very hard for me, and writing was a good outlet. I started by publishing on Tumblr, because it was a good way to keep a collection, and I wanted to see what other people thought about it. I started getting positive feedback – I’ve been posting on Tumblr for about six years now, and I’ve had followers following me from the very beginning. They’re the ones who have been sending me messages saying, “We’d really like to buy a book if you publish this.” I decided to self-publish because I wanted a physical copy for those requesting it, and I personally wanted my own thoughts in one space.

B&B: You’ve written hundreds of poems; what was the selection process for the poems that went into this collection?

KPK: The poetry book is called “Soft Girl” so it’s mostly the poems I’ve identified with in the past few years. There are poems that I’ve written for other people, and poems I’ve written during certain periods in my life, but I wanted the poems to reflect where I’m currently at. I wanted something that encapsulated how I have been feeling throughout my university life, rather than how I felt in high school when I was doing the project. 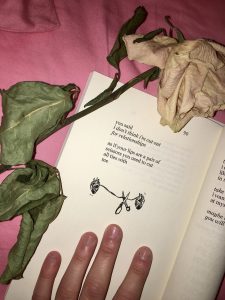 B&B: Many poems have references to “soft girl” in them. Why did you decide to make it the title of your book?

KPK: I’m a person with a lot of jagged edges, so it’s more aspirational than it is a true account of who I feel I am.

B&B: Your book features artwork by Madison Powers. What about her drawings made you want to use her work?

KPK: She’s absolutely amazing. I went to elementary school with her, and I’ve been following her on Instagram and Facebook for many years. She mostly does ceramics, and she carves her drawings into her pots and vases and mugs. She does really thick charcoal work. What drew me to her was her life drawings. A lot of my writing is about being or feeling naked and she does such beautiful line drawings of the human form. That’s something I really wanted to incorporate. Many people don’t feel at home in their bodies, but she makes the drawings feel home-like to me.

B&B: Do you have a favourite poet? Which writers have influenced your work?

KPK: One of my favourite poets has significantly influenced my writing and my book. Her name is Susan Minot, and she has this poetry book called “Poems 4 A.M.” I would specifically only read it at four AM. It’s a collection of her travels, and each place she went, she had a new collection of poetry. I found it at the bottom of a thrift store bucket for twenty-five cents, and I’ve kept it with me ever since I started writing.

B&B: Two major themes running through your poems are love and mental health. What is it about these two topics that keep you coming back to them in your writing?

KPK: I found it’s easiest to write about what you know, and like you said, love and mental health are very big topics in my life. I have bipolar disorder type II and I’m vocal because many people don’t talk about it. In one of my poems, I say “The angry people spoke with their hands, the happy people spoke with their eyes, and the sad people never spoke at all.” That’s very scary to me. I would never want people to feel like that, like they can’t talk about it. I find writing poetry helps people identify with something they’ve been feeling and may not have been able to say for themselves. 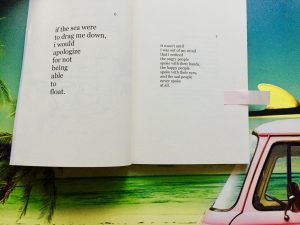 B&B: Do you find that harnessing your emotions within poetry helps you make sense of them?

KPK: One hundred percent. When I’m having my bad nights, I’ve found writing is very calming and releasing. It’s a way to really harness and ground yourself if you can’t find any other way to do it. I’ve honestly found that writing for me is more beneficial than therapy.

B&B: You touched on being passionate about mental health. What makes you feel so strongly about being vocal, and whether you’ve found issues with the way others portray it.

KPK: Mental illness is severely romanticized. It seems like it’s a beautiful thing that people are hurting, and this is a huge problem happening right now, in all forms of media. I’m hoping that I didn’t come across as that in my writing. That was not the intention. It’s very important to me because I did have a friend in high school who passed away from his mental illness. For me, writing was how I found peace with it, because I believe if I had spoken to him more outwardly when he was around, things could have ended differently. I feel very passionate about speaking out and getting help because some people never had the opportunity to do so.

KPK: There’s this quote that says, “You can’t love anybody else until you love yourself.” I find that I can be completely full of love for other people and for life, even on the days that I am struggling the most. Mental illness and love are not at war with each other. It’s not as if you can’t have one and not the other. There’s a difference between romanticizing mental illness and romanticizing yourself… I am my mental illness but I’m also a person that is completely full of love for life, and it’s a hard and delicate balance. I hope I’ve shown that you can be so much more than the things you are struggling with.

Karys’ Instagram handle is @karyspk, and you can read her poetry on Tumblr. “Soft Girl” is available for purchase on Amazon and Createspace. You can check out Madison Powers’ artwork on Instagram, her handle is @morethanclay.

As the end of the semester swiftly approaches, many students on campus have the added stress of preparing for an…