McGill is frustratingly yet simultaneously a launching pad below you and the force of gravity above you. McGill’s name and academic rigor can produce some stellar candidates for jobs in all fields, but breaking the exosphere is a tall order: sometimes the obstacles themselves amount to a force of gravity so great that you simply cannot elevate yourself. The hardest part for most is the fog of uncertainty that permeates the space, leaving you to float in between the forces of propulsion and gravity clueless. Given that I doubt most 18 year olds are hardly settled on their career, wants, etc., it is my opinion that most people make it through McGill having existed somewhere in this space.

However, for some that space is just not the right fit and they move on down the road to Concordia, or drop out. Some, like Jordan Benjamin aka Grandson, a former McGill student now signed to RCA Records, do both. Now with a music video on Vevo (what could be described as School House Rock gone wild) for his song “Bills”, which also has over a million streams on Spotify, Benjamin Skyped in from LA to talk with The Bull & Bear about his journey from McGill student to professional musician, what the music business is like for newcomers, and his latest release, “Kiss Bang”.

Originally from Toronto, Benjamin went to Northern Secondary School before making his way to McGill where he came in contact with a number of individuals with whom he would learn, try, fail, and grow. Enrolled in Arts and Education, Benjamin was not too fixated on studies, “leaning on… extracurricular [activities]” and learning from his involvement off campus. Perhaps a fourth year out there recalls the fire that used to be spun at Korova Mondays? That was the crucible of Benjamin’s DJ apprenticeship under the 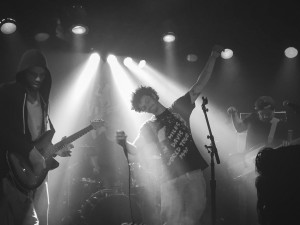 Benjamin met his DJ mentor Rowan through their shared involvement in the McGill vocal performance group Effusion A Cappella. Here too Benjamin grew, telling The B&B that he learned “a lot [from Effusion] in terms of getting better at singing… putting together a concert or filling a venue”. These skills came in handy as the torch passed from his mentor and Benjamin took control of the turntables at Sucka Free events (the last of which was Jan. 16th).

While he developed as a DJ, and added new works to Effusion’s repertoire, Benjamin was still discomforted from being caught in the air without direction. “McGill can be an incredibly useful place, as a springboard to do something else – law school, med school, get your masters; but you need a clear sense of what you’re there to do.”

In search of something more the right fit, Benjamin went over to the dark side (transferred to Concordia). There he studied communications for a bit before he eventually dropped out to pursue his musical career. Benjamin told The B&B that when he first arrived in Los Angeles, Calif. he had on “rose tinted glasses… I thought that it was a much more linear path to success and you just needed one or two lucky breaks your way… but I underestimated the amount of work that goes into your personal identity… music is oversaturated right now… you have to be doing something good and be doing so 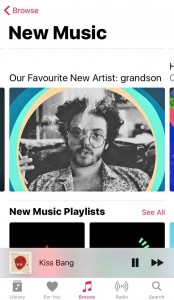 mething different.” Still soul-searching when he reached LA, it was a bit before Benjamin tuned in to exactly what made him tick.

That is the place in this story when Benjamin turned Grandson.

Grandson told us that his new unique moniker was meant to reflect “the best slash most transparent demonstration of being this age at this time in the world.” Admitting that he still isn’t very good at the “elevator pitch”, Grandson went on to describe his project’s intentions:

“The point is to give the people a sense of being understood. It’s for 14/15 year olds getting into fights with their parents, hiding a joint in their sock walking to high school… But [Grandson is] also for people between 20 and 25, and [it’s about] the vices, [the] destructive habits we rely on… [It’s about] that sort of transitional time, trying to have a soundtrack for that, which is unapologetically, 2017.”

“You need a willingness to show up and put yourself out there; the universe can’t wait to do what it does while you’re stoned on your couch.”

In response The B&B asked him if anyone has every compared him to Travis Scott for his rebellious and vice themed music. “We get those comparisons as much as… [The] Black Keys as much as we get Rage Against The Machine… so there is some of that.” Grandson’s style is still pretty unique but developing and he made it clear that “I want to open for Odd Future as much as I want to open for Red Hot Chili Peppers.”

It seemed like Grandson had been on his own sojourn since departing from YUL one fateful day. Among the franticness of what he described as “the Mecca”, he made it clear that it’s important to “remember where you’re going… you’re in the biggest pond you could be in.” The commodity of identity seems to be a place Grandson allocates a lot of his artistic energies, recounting to The B&B that upon moving to LA he stopped drinking, stopped doing drugs, and has since taken to reading more.  For a brief period of time he even did “real life stuff”. That is, he had a relationship… something too many McGill students I’m sure wished they had time for.

Nevertheless, since he turned Grandson, there have been some crazy parts along the way that demonstrate the collaborative nature of the modern music world. You remember those naked Trump statues that popped up during the summer? His song “Bills” was the music to a video that the artist collective behind the statues, INDECLINE, put together. 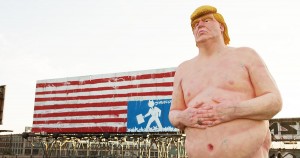 However, more recently, Grandson just released his newest track “Kiss Bang” on March 3rd. The track is what he described as “a cautionary tale” that tells the story of a woman who walks in on her husband cheating, and in turn “murders his mistress in cold blood”. Going back to some of his work’s frequent motifs, “Kiss Bang” warns against the “dangers of living too hedonistically. [It’s] written for those that, despite not necessarily meaning to hurt anybody, are living with a myopic view of the world and are oblivious to how their actions affect others.” Though much of his work is personal and anecdotal, Grandson said that getting to tell a story is still one of his favorite parts of songwriting. He’s also been behind others’ success, having ghostwritten another song, which has garnered over a million views on YouTube, as well as tracks with emerging SoundCloud talents.

But all this came after some more homeward legwork. In the past he’s gone on tour with McGill’s own Busty And The Bass, and collaborated with a number of musicians in the city. So it could very well be you have seen him at OAP or an Effusion or Busty concert, wilding out on his way to figuring it out. One thing Benjamin/Grandson made clear to The B&B was that to succeed both at McGill as in LA you need to seize as many opportunities as possible. “You need a willingness to show up and put yourself out there; the universe can’t wait to do what it does while you’re stoned on your couch.”

The B&B asked Grandson to plug some art (of whatever form) for this article. He suggested the book The Wisdom of Insecurity by Alan Watts, which he accredits with helping him come to terms with uncomfortable emotions and to put in the challenging efforts that have so far born fruit.