The Evolution of Street Art

In Montreal, it’s rare to take more than two steps without seeing a wall covered in graffiti. Murals have become an essential part of how we navigate the city, and how we see the world. This relatively new cultural phenomenon has exploded internationally and drastically changed urban landscapes across the world – major cities have become open air art galleries. Among many other urban landscapes, Montreal is recognized as one of the best places to both create and observe this peculiar art form. As Banksy’s iconic Flower Thrower is increasingly displayed in students’ bedrooms, it is safe to say that street art is now mainstream. But how did street art become such an established form of art, coming from its roots in anonymity and rebellion? 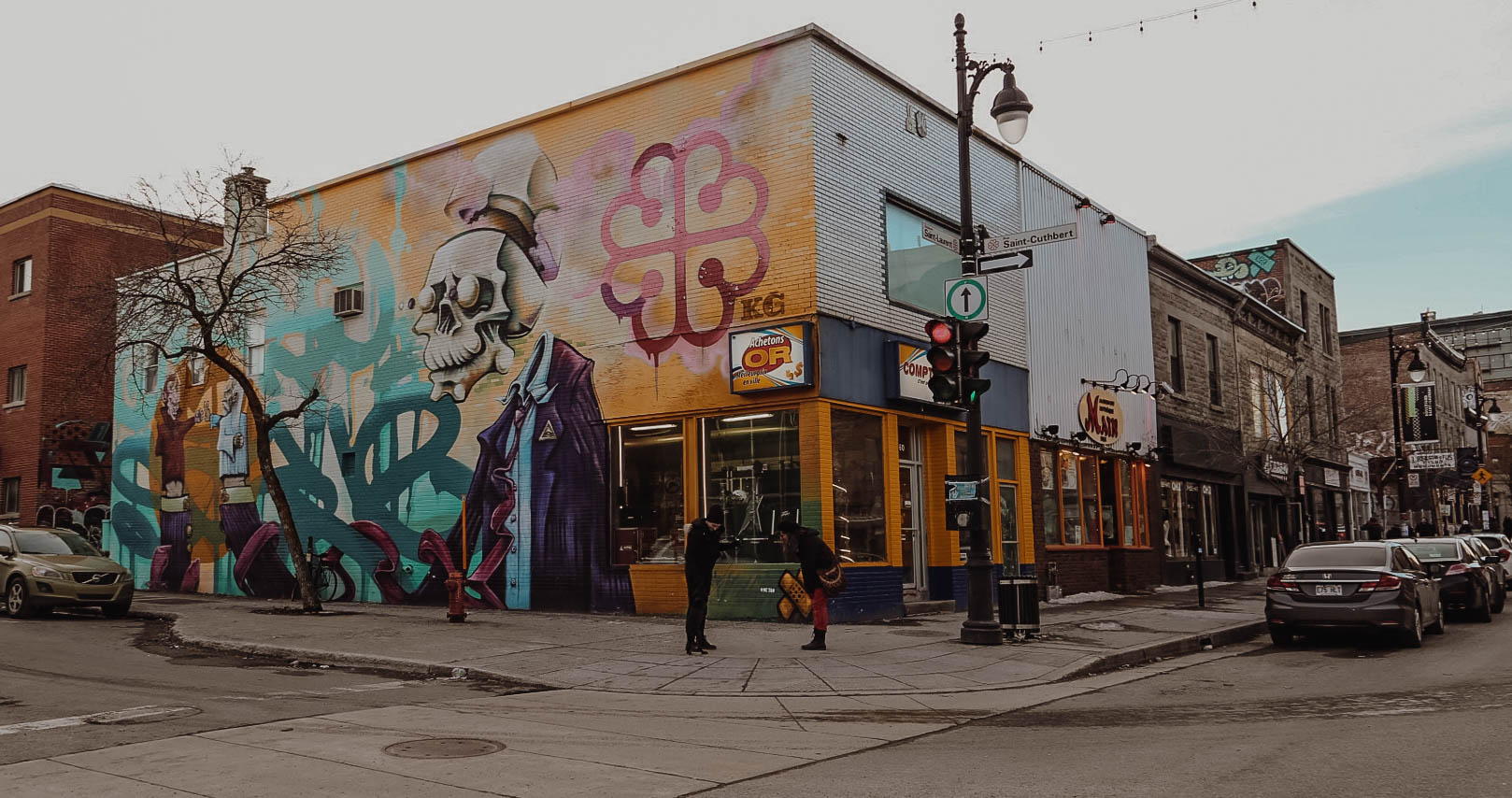 First of all, street art’s uniqueness is partly derived from its ephemerality. In most cities, strict regulations restrain murals’ expansion. Montreal, for example, requires by law that property owners remove illegal paintings. As it is prohibited to paint on the majority of the city’s urban surfaces, the average mural’s lifetime is severely limited. The artistic value of each piece is bolstered by its potential to disappear at any time – a magnificent work of art you stroll by one day may be washed away hours later.  In contrast to more mainstream art experiences, observing street art can be fleeting and short-lived. 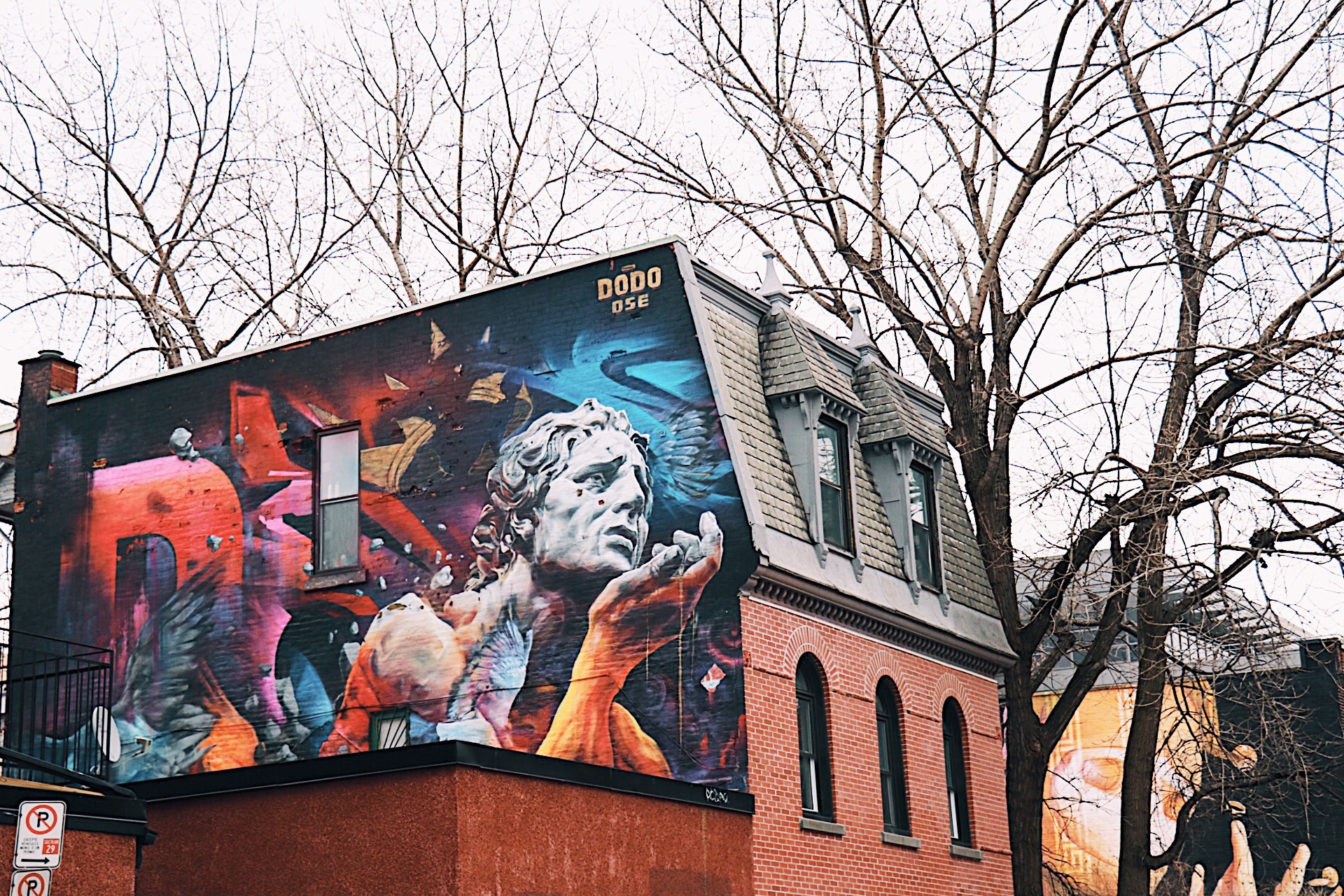 The transience of street art in certain cases can be related to their creators’ desire for anonymity, often motivated by the illegality of such actions. Whereas museum pieces are labeled and attributed to artists who are internationally famous, street artists prefer to either remain unknown most of the time or work under aliases. These names, used by artists to sign their work, may also be a mean to gain anonymous fame. One basic example is Banksy’s rise to celebrity solely through his work across the globe – no one knows who he is, but that does not stop his Instagram and Twitter followers to accumulate by millions. This anonymity embodies street art’s uniqueness and represents one of its main pillars: the artists’ unknown identity allows for their work to be judged fairly and objectively, with a touch of mystery. The obscurity is what makes the whole experience so entertaining. For all you know, the person who painted that mural down the block may be your neighbour. 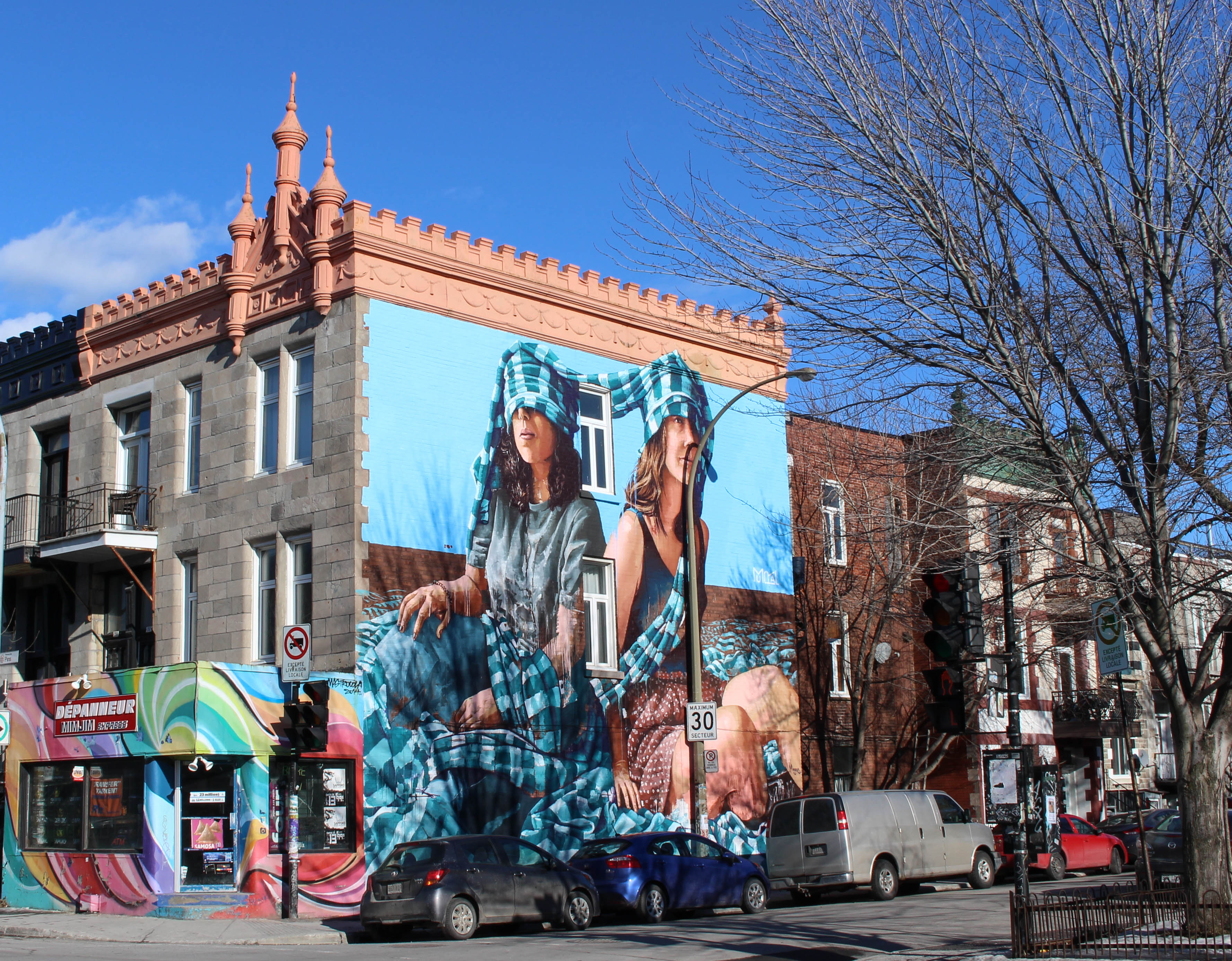 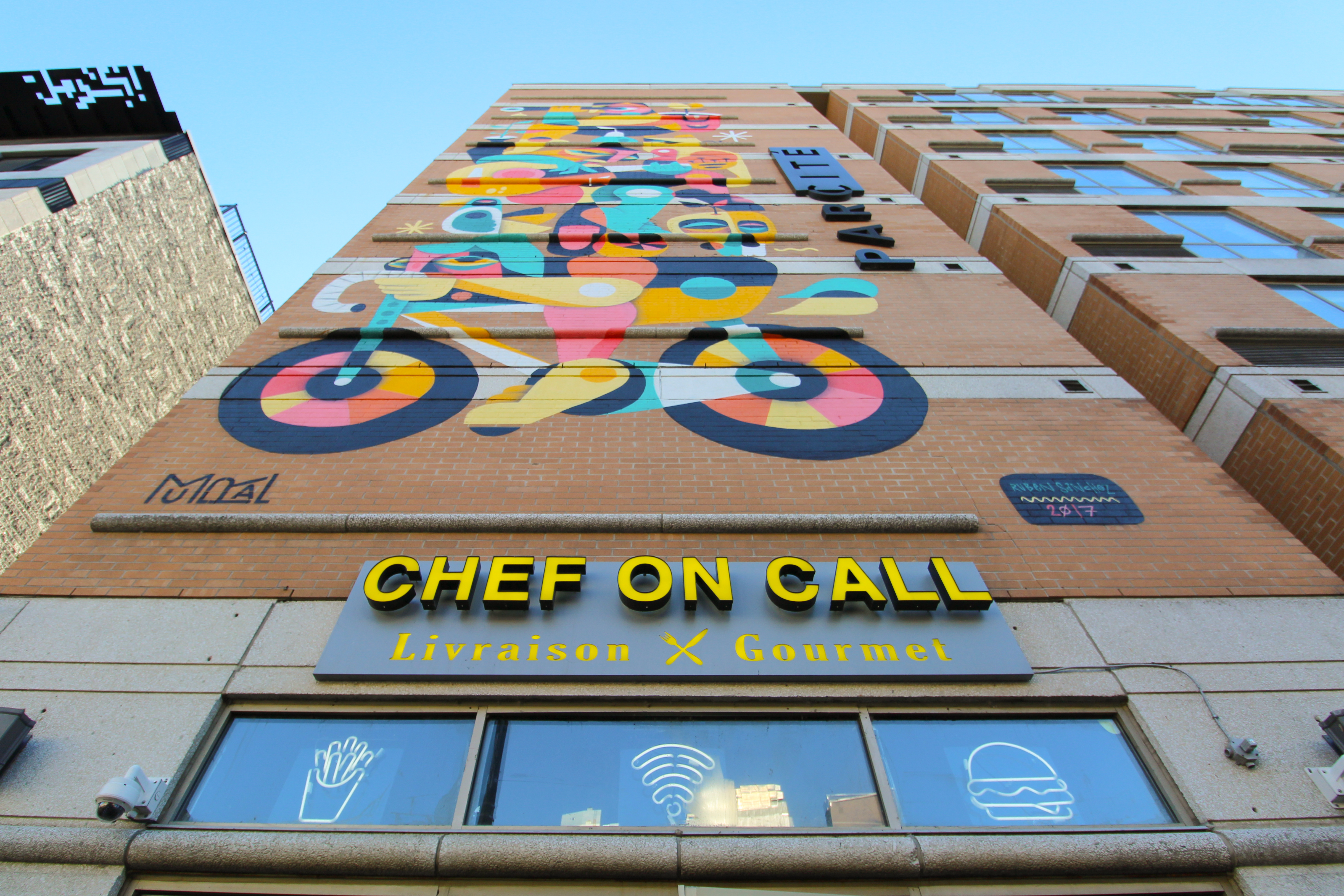 Murals are visually impressive media for social commentary, but they are also significant tools for urban innovation. The city of Montreal actually took initiatives to create more murals among its streets, in order to give birth to high-quality art and improve borough life. In addition to such measures, street artists have taken the matter into their own hands. There is a cycle of renewal: as urban zones are abandoned, regulations and surveillance are more relaxed. As a result, street art disseminates in the area, which in turn brings curious crowds and activity. This urban renovation does not stop at tourism, though – murals have the power to reanimate deserted urban zones, solely through the artistic value they provide. Colourful and aesthetic murals can radically change a neighbourhood’s atmosphere: Montreal counts many examples among its districts, notably the Boulevard Saint-Laurent, which proudly harbours some of the city’s best street art. Moreover, the metropolis’s clear, spaced-out and open street structure, as well as brick and concrete-based architecture, are perfect accommodations for such spray-painted expressions. This urban symbiosis is arguably one of the reasons the city has such a distinct visual identity. 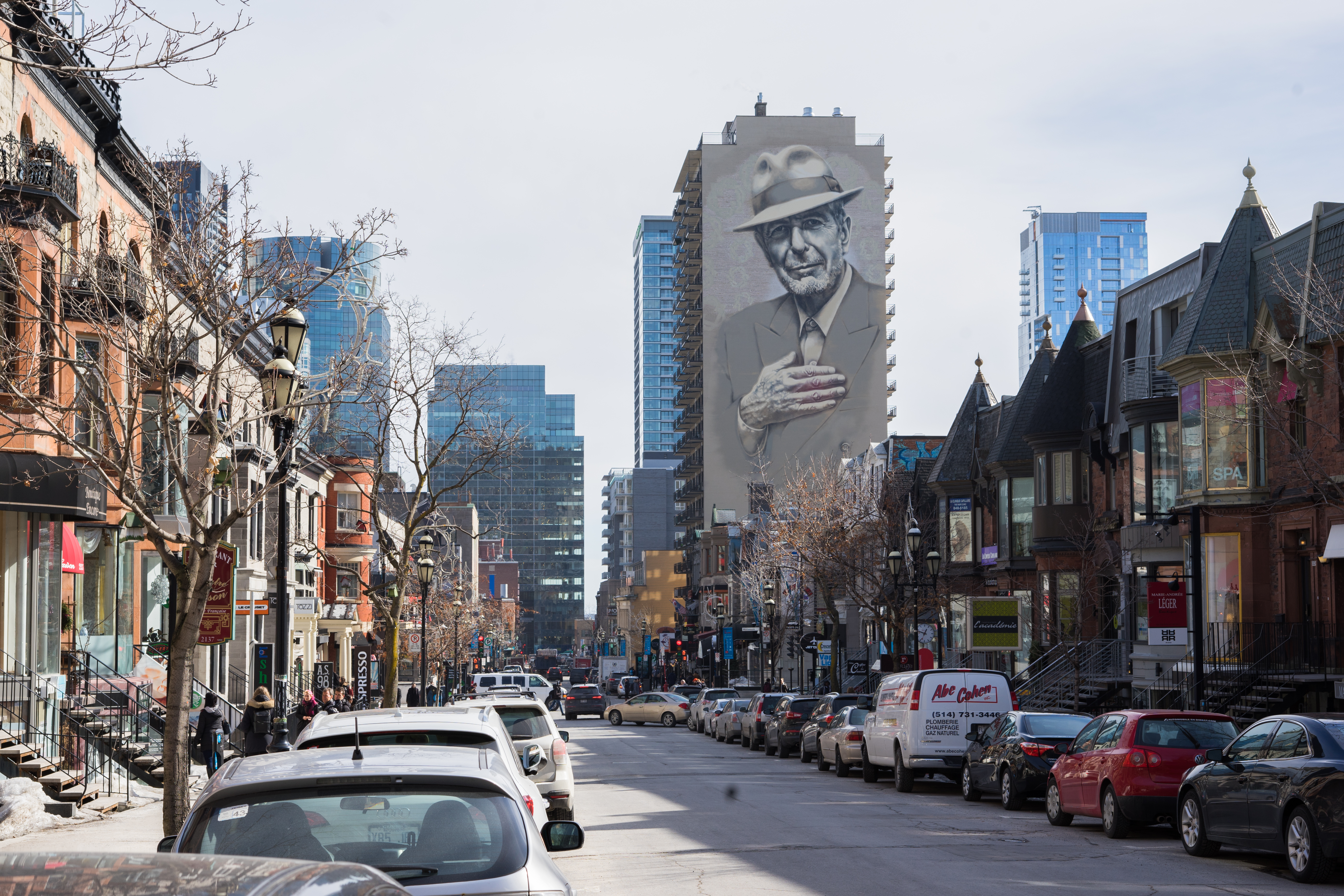 Street art has now gone through a significant evolution, allowed by two factors. The first is its power of urban renovation. Urban art’s artistic value has been slowly accepted by most, transcending its image of vandalism and crime. The second reason is the huge costs associated with removing illegal paintings that keep returning. Montreal’s tight regulation has resulted in communities mobilizing for spaces dedicated to the creation of authorized murals, such as the ones near the intersection of Prince-Arthur and Saint-Laurent. Urban paintings and street artists have therefore exploded among the city’s districts, now allowed to permanently mark the urban landscape. 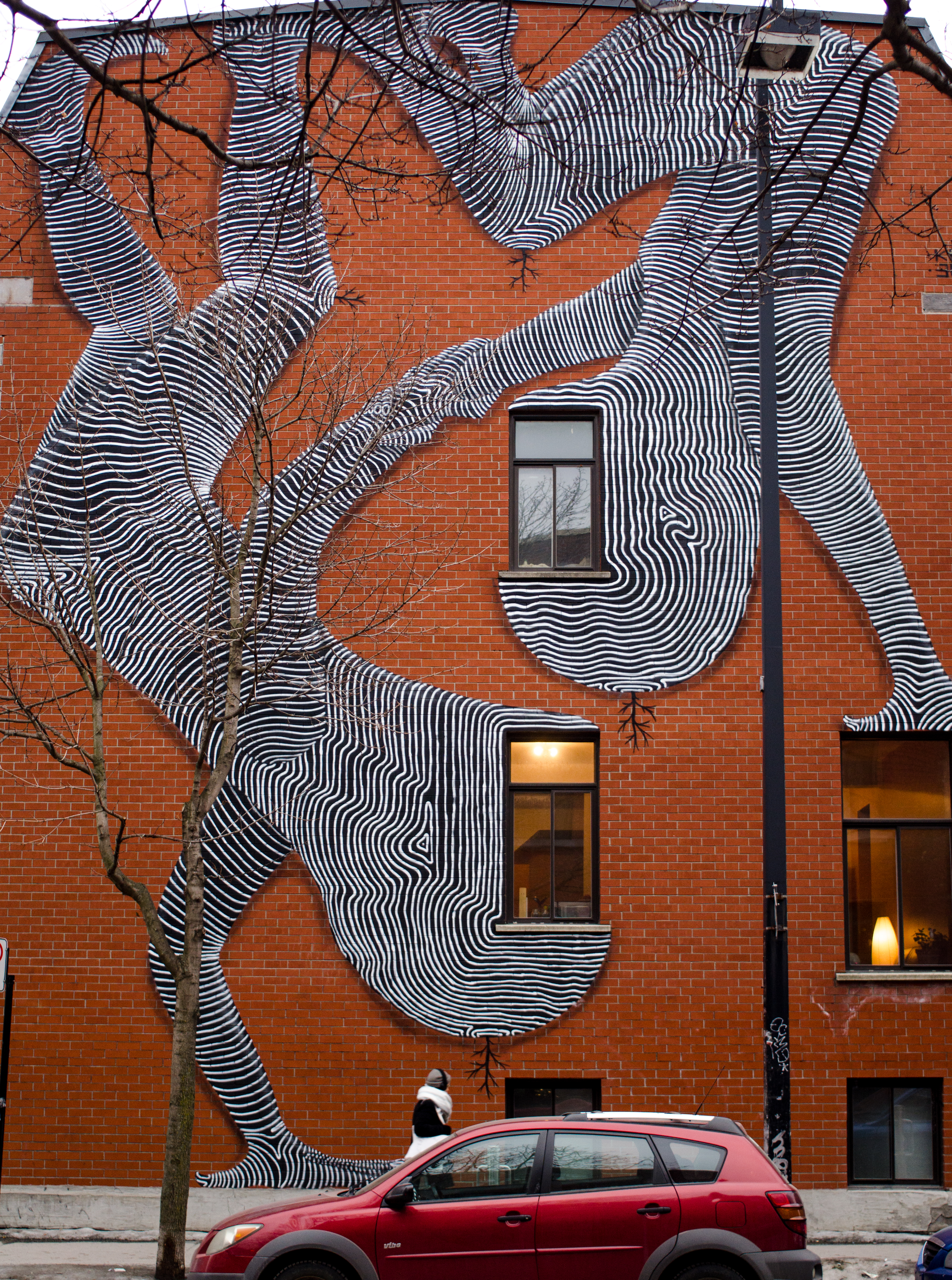 Mural by Klone Yourself, photo by Erik Friedman 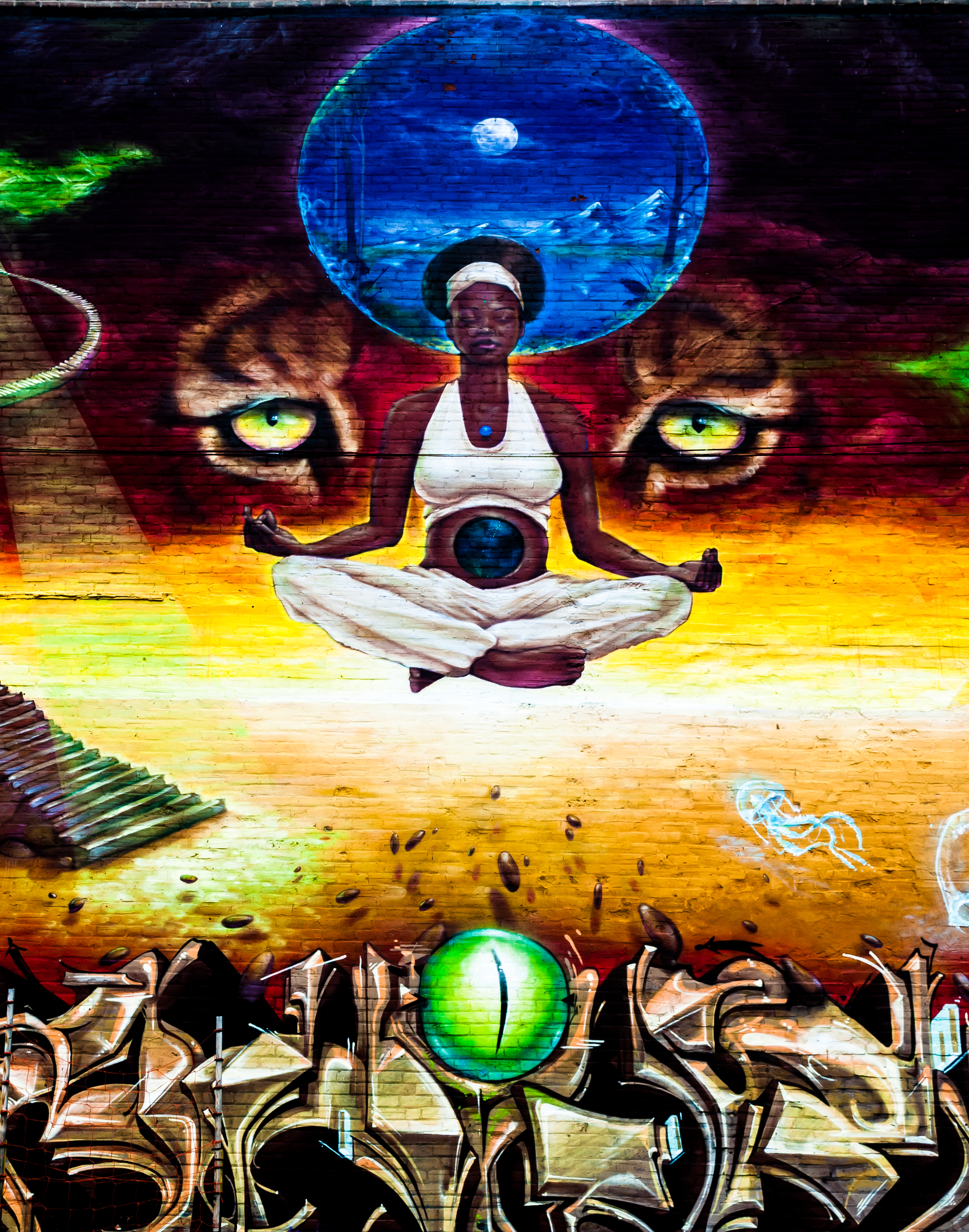 Consequently, street art has expanded, developed and moved away from being defined solely by its two main characteristics – ephemerality and anonymity. With legitimacy, street art has finally found a safe, enduring haven in the streets. Moreover, as street art has started to be requested and commissioned, many artists now choose to make their identities public and even showcase themselves at work on social media platforms. This drastic change has resulted in some of these urban artists’ rise to fame, finally putting some familiar faces to previously anonymous murals. For example, Montreal’s Miss Me has been exposing her sometimes unsettling but impactful work in the streets, allowing her to gain coverage from Complex, Vice and even TED Talks.  This change should not be seen as street art’s betrayal of its true roots, but as a necessary evolution. After all, legitimacy is what has allowed the unique urban art form to blossom and breed impressive creations. 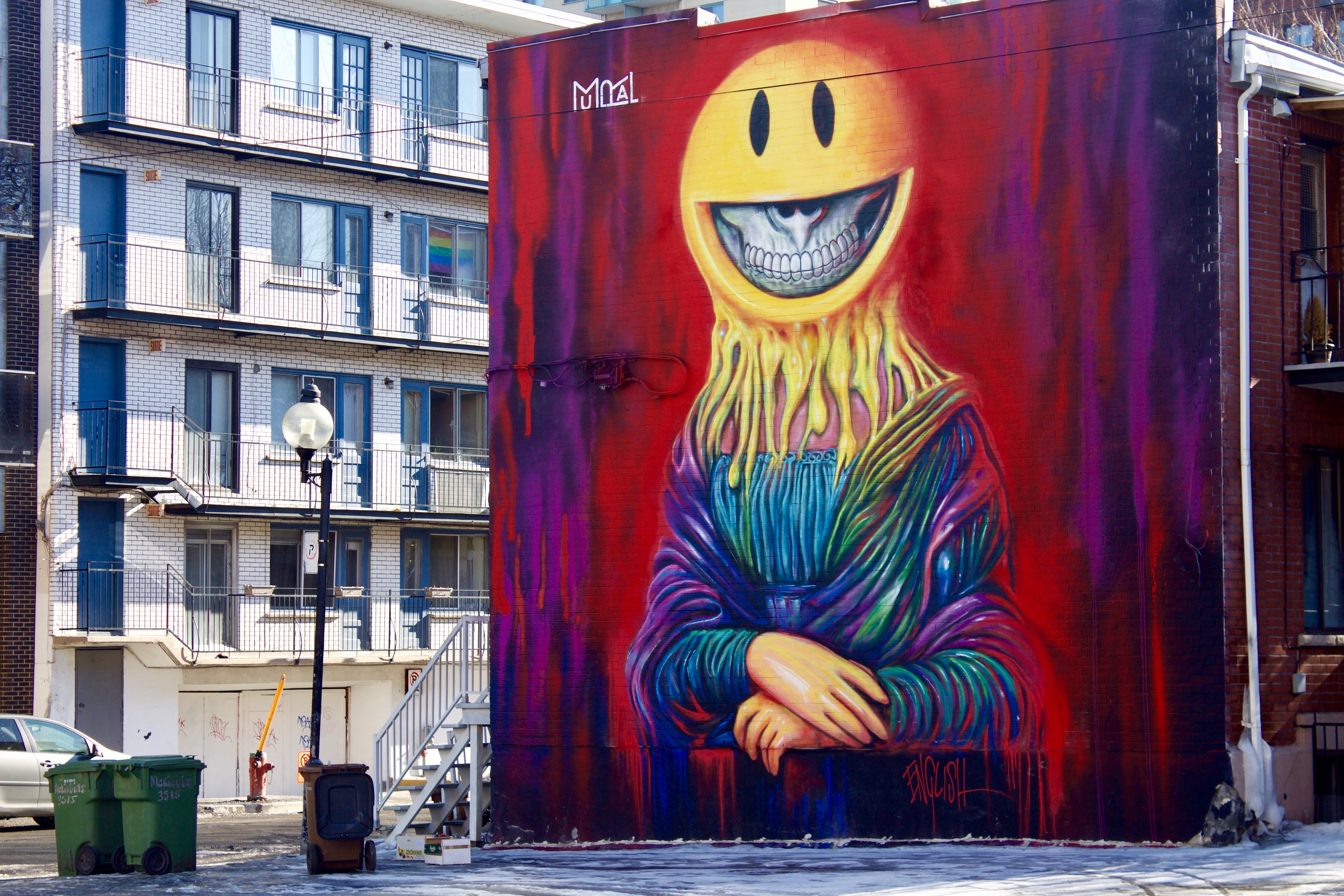 While some closed-door expositions such as Station 16 exist, art has moved out of museums and stormed the streets. Parking walls, brick buildings, concrete tunnels and rooftops have become literal blank canvases for the Rembrandt of our times. Street art is now a cultural phenomenon, celebrated across the world and is the origin of countless festivals, gathering dozens of artists from around the globe. Montreal in particular has seen the birth of a community and hundreds of beautiful murals, notably through the city population’s active support and favourable architecture. Street art is one of the most authentic ways to experience the city, and best of all, it’s free. If you are into all things street-art related or just someone who enjoys watching attractive and engaging murals, be sure to check out Montreal’s Mural Festival and MU – you will not be disappointed. 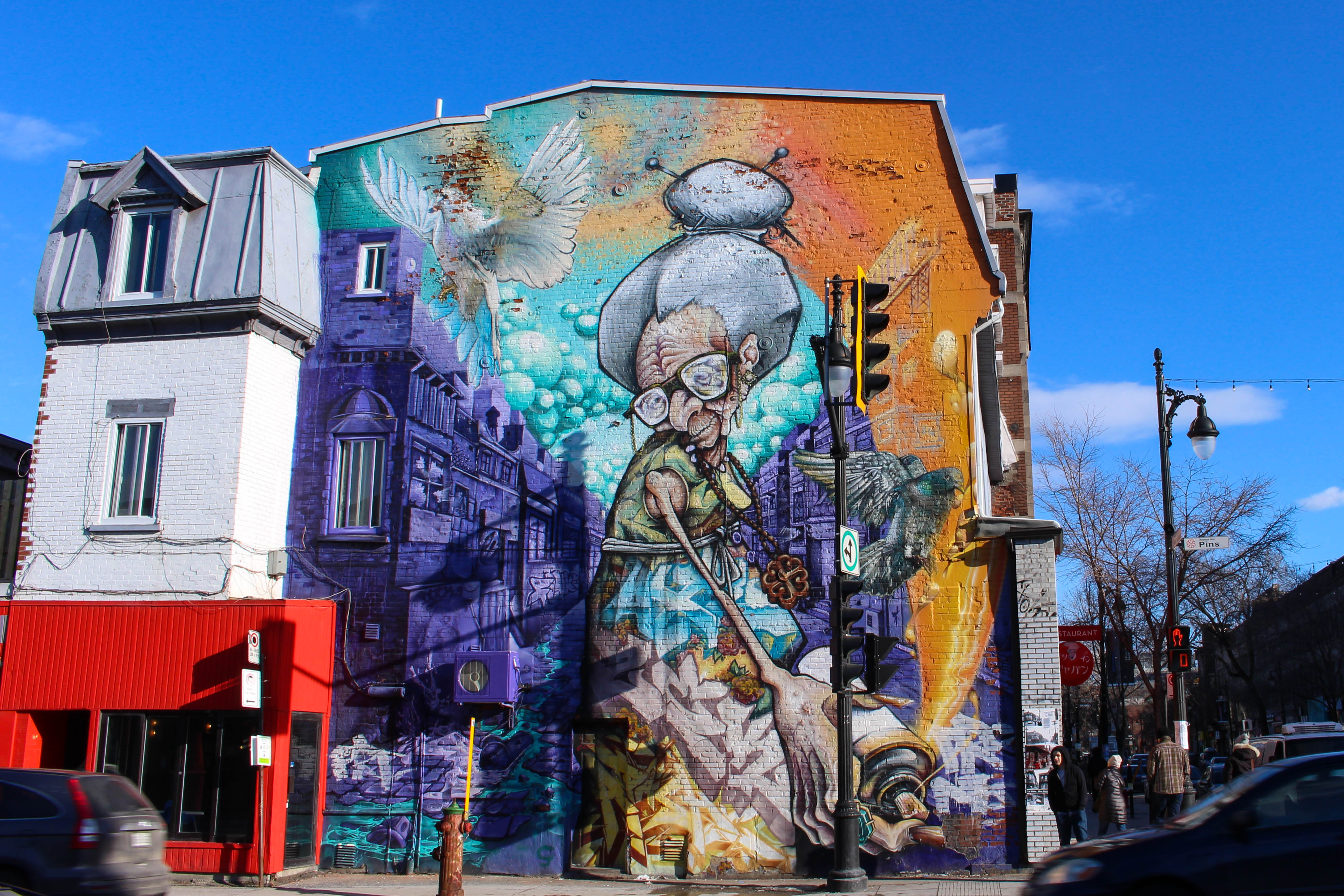