Kanye West blasts out of a mirrored room on the ground floor of the McGill gym. Reflected in the mirror are not dumbbells extending from bulging forearms or listless eyes staring into the treadmill void, but dancers. Specifically, dancers belonging to Mosaica Dance Company, a group of eighteen females and one male hailing from heterogeneous dance backgrounds. They are rehearsing their self-choreographed pieces, which will be performed during Mosaica’s 2019 Showcase, “Momentum,” on Friday, March 22 and Saturday, March 23 at 7:30 pm at the D.B. Clarke Theatre. While all the dances toe the line between contemporary and jazz, the dancers sprung down diverse paths before leaping into Mosaica.

You learn more from doing what you’re a little bit more uncomfortable with.

Before coming to McGill, U0 student Isabel Heard was a devout bunhead. After years of dancing in the pre-professional division at the prestigious Atlanta Ballet and only being choreographed on, Heard found her footing in Mosaica. Although joining meant departing from ballet, the members’ conviviality drew her in. Thanks to Mosaica, Heard has been able to choreograph on serious dancers for the first time, although she has chosen to shake off her balletic habits by setting her contemporary piece to James Blake’s Lead Me to Your Love. To describe the flow of the song, she simply grooves a bit, a bit of a body rule, a fluid finger snap for flair. 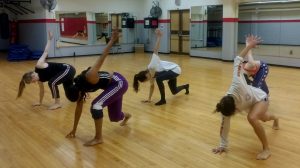 “You learn more from doing what you’re a little bit more uncomfortable with,” Heard said. Her advice extends to students wishing to traverse the arts scene at McGill as well. “Having a little bit of arts in your life is so important,” she continued. “It’s about having people even know that it’s in the community and happening at all.”

In addition to providing students with base exposure to McGill’s dance scene, U2 student Justin Rapp aspires to surprise the audience with Mosaica’s physical and artistic abilities. Rapp has titled his first self-choreographed work “No Hesitations,” the repeating line in the chorus of Imogen Heap’s The Moment I Said It. His background as a competitive dancer awarded him with an appreciation for competition-style dance tricks and highly technical skills, but a rejection of its clear wind-ups into the moves. So, Rapp has mapped his dance out as eccentrically unpredictable, incorporating mega movements where theatre-goers least expect them, especially given the dance’s near total lack of pause.

“Once [the song] says ‘No hesitation,’ it’s go go go go go basically until the end,” Rapp said. “I don’t want it to look like I have five competitive dancers who have been trained all their lives and I just gave them in-between steps of choreography and it’s all about the tricks. I told my dancers that they have to go for it.” 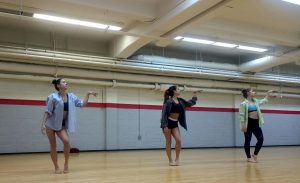 Rapp will also be dancing with U2 student Paloma Noriega, who has choreographed her duo along more literal lyrical lines. Noriega’s choreography ebbs with the words of the original version of Leonard Cohen’s Famous Blue Raincoat to illustrate the song’s nostalgia. For Noriega, the creative process always involves constant collaboration with whomever she is choreographing on. Like Heard, Noriega danced  pre-professionally for a major company, the Calgary Ballet. Now in her third year with Mosaica, however, Noriega has progressed out of her balletic instincts to encompass Rapp’s more contemporary background in the piece. According to Noriega, this interplay between genres is what makes Mosaica home. “Everything just kind of compliments each other,” Noriega said.

For many of Mosaica’s dancers, leaving dance as a demi-career in high school meant that they needed a new goal to pursue.

The dancers themselves dovetail in rehearsal. One of the large group numbers, the source of the resounding Kanye, links ten dancers with gutsy lifts, intricate formations, and one central message. U1 student Nikki Huebener, a Mosaica coordinator, tied an ambitious dance to an ambitious message: “Set a goal and make it.” Her dance is set to Ghost Town, and the alternating steel and softness in each dancer’s eyes, the vivacity of each limb, and the grit behind each athletic bound create a splice strengthened by each dancer’s interpretation of Huebener’s, and Kanye’s, artistic and emotional intent. For many of Mosaica’s dancers, leaving dance as a demi-career in high school meant that they needed a new goal to pursue. The March performance, and Mosaica as a whole, presented this opportunity.

“It becomes such as big part of your identity, being a dancer,” Heard expressed. “You have to rethink who you are as a person without that in your life. That’s why I knew I had to join something like this- because I needed to still have that as part of my identity.”

In rehearsal, Mosaica displayed enough oomph to inspire dance enthusiasts and non-enthusiasts alike to absorb dance into their identities. Semi-spoiler alert: there is a moment during the “and I feel kinda free” line in Ghost Town that, singularly, makes the performance a must-see for all.

Many McGill students take similar academic paths to graduation. Though the courses they take, the major and minor concentrations they…