Which do we love more: bad movies or their troubled directors? Would we love The Room without Tommy Wiseau’s raw passion and monstrous ego? Would we love Birdemic: Shock And Terror without the misplaced optimism and environmental hand-wringing of James Nguyen? What about more mainstream, classically egotistical, fun-bad filmmakers like Ed Wood, Uwe Boll, and mid-period M. Night Shyamalan? It’s not to say that a genuine filmmaker is necessary for a bad film to be great; many bad films (including one of my favourites, Samurai Cop) have totally anonymous filmmakers behind them. But a human spirit, and a bit of lore behind the badness, turns a film from good-bad to great-bad, perhaps even into masterpiece-bad.

My friends, it is my pleasure to introduce you to the man, the artist, the Stanley Kubrick of bad films: Neil Breen. Who’s Neil Breen? This is Neil Breen: 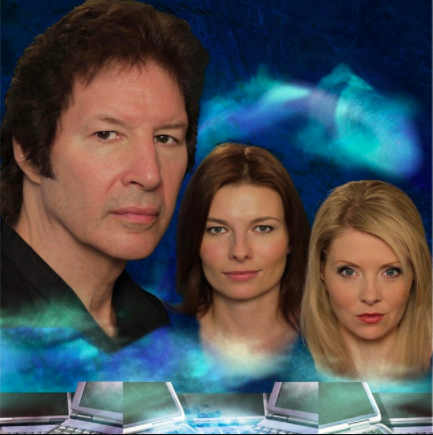 (He makes this face, by the way, in every poster for every one of his films.) 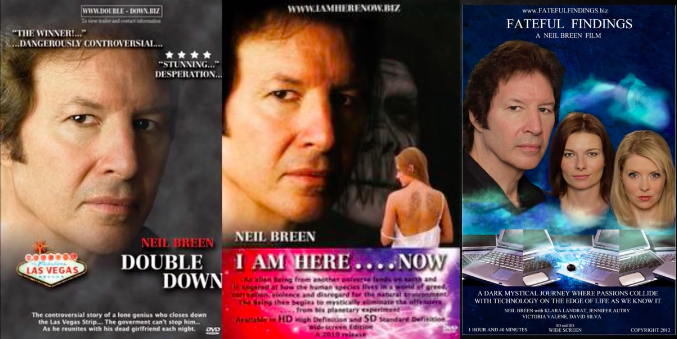 Neil Breen is a writer-director, actor, producer, cinematographer, editor, caterer, but most of all, an artist. He has made four films: Double Down, in which Breen plays a master hacker trying to stop (and also start?) a terrorist attack of anthrax on the city of Las Vegas to avenge his dead wife; I Am Here….Now, in which he plays the robotic reincarnation of Jesus Christ (really) who stops a gang of drug dealers from running cocaine across the mexican border (REALLY); Fateful Findings, my personal favourite, in which he plays a master hacker trying to expose government secrets to avenge his dead wife (again); and Pass Thru, in which he plays a robot alien sent to cleanse the earth of humanity. The title of his upcoming film? Twisted.

If you’re making a case for any bad filmmaker as a genuine auteur, Breen is your best bet. There are a group of recurring sets, camera moves, props (including several broken laptops, which he frequently abuses), images, and therefore themes that echo throughout his filmography. Fateful Findings and Double Down share hacking plotlines but also dead wives, secret notes, ghosts, magic rocks, suicides, and two-faced women. In Double Down and I Am Here….Now, Breen cures someone’s blindness. In I Am Here….Now and Pass Thru, there are images of dead bodies in the desert, rendered with creepy mannequins in the former.

Unlike Tommy Wiseau, a multimillionaire chauvinist who bought his way into bad film history, Breen is a populist who finances his films through his real estate job, releases them to the public, and denies all authorities like festival programmers, producers, and all the people who might tell him, ‘That’s not how you frame a shot.’

These films are cheap, but that cheapness only endears me further to Breen’s Kubrick-for-a-quarter aesthetic. There is a recurring dream sequence in Fateful Findings that takes place in a slimy, black room, and to the best of my knowledge, Breen achieved such detail by lining the walls with garbage bags. Many scenes are shot in Breen’s house, demonstrated by the lovely shag carpeting of the “hospital” that the characters are supposed to be in. His special effects, green screens, and his frequent use of stock footage and stock music create a sort of distant, surreal, almost Lynchian tension. His editing and framing are so incompetent that they become unintentionally elliptical as he radically breaks down the rules of cinema. You laugh because slowly, yet surely, Breen is invading your soul.

Beyond his technical brilliance, Breen truly has a gift for performance. His actors give delightful line readings that must be seen to be believed, but my favourite is when Breen, after seeing his friend framed for suicide, says, “I can’t believe you committed suicide. I cannot believe you committed suicide! How could you have done this? How can you have committed suicide?” Worse yet, his blocking is some of the clumsiest in film history (sometimes literally: in Double Down, Breen nearly drives his car off a cliff because he’s eating a can of tuna at the wheel).

[…] watching a Breen film all the way through is like watching your brain degenerate in slow motion.

But enough about his style, what about his story? Unlike Tommy Wiseau, a multimillionaire chauvinist who bought his way into bad film history, Breen is a populist who finances his films through his real estate job, releases them to the public, and denies all authorities like festival programmers, producers, and all the people who might tell him, “That’s not how you frame a shot.” I truly believe that Breen believes that he is a genius, and that’s half the battle. When asked about his films, without fail he will say that they are meant to be interpreted, and that they lack literal meaning. Not content to solely be a mysterious artist, Breen also fancies himself an important political figure; after revealing lots of government and business secrets “about all the national, AND INTERNATIONAL corruption [Breen] KNOWS is going on,” he ends Fateful Findings with a montage of disgraced politicians committing mass suicide. And no, he doesn’t have the budget to pull this off!

There is a madness to watching a Breen film; you can feel reality breaking down. Take, for example, this image:

Does Breen know that the face mask and nose tube are not actually going into his face, because of the bandage? Does he care? Is this a joke? Is this surrealist art? It’s hard to say. If you watch the “best of Breen” clips online it doesn’t capture the full experience; watching a Breen film all the way through is like watching your brain degenerate in slow motion. Words and images slowly lose their meaning, and you’re not sure whether Breen is actually a genius after all.

If you want to watch Breen’s films, though, tough luck. You’ve got to buy the DVDs from his wonderfully designed websites, and streaming can be a bit tricky unless you want to watch compilations such as “The Best of Double-Down.” Without telling you exactly what to do, you may have to resort to your own master hacking skills to discover these fateful findings.

About 2,500 years ago, Greek philosopher Heraclitus warned against any attempts at forecasting the future, proclaiming, “nothing endures but change”….