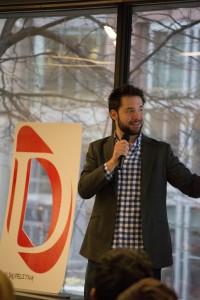 “Sucking is the first step to being good at something.”

It was an unusual message to hear coming from the second floor of Bronfman, in an environment where academic and extracurricular expectations often demand nothing but excellence. Yet it was more than appropriate coming from Reddit co-founder Alexis Ohanian, who experienced his fair share of failures throughout his over decade-long career in technology and startup culture.

Ohanian’s advice was part of a speech he was giving as part of his tour across several North American universities, with the McGill stop coordinated by HackMcGill in conjunction with the the Desautels Faculty of Management and the Dobson Centre for Entrepreneurial Studies. After HackMcGill member Sami Jaber noticed an announcement of Ohanian’s plans to tour promoting his new book, Without Their Permission, while browsing reddit one day, he quickly contacted Ohanian’s team with several other HackMcGill members and coordinated the event. Desautels assisted with providing the venue and supporting HackMcGill, as part of the faculty’s efforts to expand its already existing speaker series.

Ohanian’s speech recounted his earlier days of getting involved on the internet through designing websites for small non-profits on Geocities. Following a few years of studying history at the University of Virginia, he decided to reevaluate his dreams of being an immigration lawyer after leaving an LSAT prep course and finding himself at a waffle house.

“I realized, as I was sitting in this waffle house in Virginia, that if I wanted these waffles more than I want to be a lawyer, I probably shouldn’t be a lawyer,” Ohanian explained. Instead, he made the decision to take a different path, one that eventually resulted in the creation of the highly popular sharing site Reddit.

“We had no idea what we were doing at all.”
Along with Reddit co-founder Steve Huffman, Ohanian approached Y Combinator, a program that trained and financed startups. Their first idea, MyMobileMenu, an application that would alert users once their meal was ready at their choice of restaurant, was rejected outright. Y Combinator saw potential in the team, however, and advised them to try their idea as a website platform. Just like that, Reddit was born. Despite their success, Ohanian and Huffman hardly had it all figured out.

“We had no idea what we were doing at all,” Ohanian recounted to the crowd of McGill students. “And the secret is: no one does. No one really knows what they’re doing. Expertise and experience help tremendously, but we’re all hacking it. Anyone who fronts to you like they have it all figured out is either lying or delusional.”

The journey for Reddit to become a platform that engaged users that currently total four times the size of Canada’s population was hardly easy. The site faced competition from Digg, a better funded, Silicon Valley-based competitor, and skepticism from major companies like Yahoo.

Still, the two remained positive. For Ohanian, a big part of this was ignoring competition and instead striving to create the best version of Reddit they could. “If you’re doing anything remotely interesting,” he explained, “there will be other people doing other similar stuff close to follow. That’s fine.”

Instead, the two focused on innovation. For Ohanian, ideas alone weren’t enough. “Everyone has great ideas. No one wakes you up in the middle of the night to say ‘I have a terrible idea.’ We all have great ideas. The difference is, the barrier to entry for us is as low as a laptop and time and an internet connection. Don’t get hung up on great ideas – get started on them.” 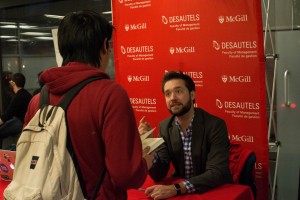 The Next Big Thing

Ohanian’s speech was relevant to the 100 students in attendance from all different faculties, but it was especially pertinent to the many attendees involved in HackMcGill.

“Just like Alexis was saying, software is biting the world. It’s everywhere,” explained Mohamed Adam Chaieb, one of the co-founders of HackMcGill. “Being in any tech field, it’s more about learning how to apply tools in new ways. It’s basically about innovation. How can you take a field that hasn’t experienced technology before and apply it there and discover what happens?”

HackMcGill hopes to be this very source of innovation for a generation of McGill students seeking to “get started,” even if they are not necessarily sure how.

“One of the main things we want to do,” explained Jaber, “is develop this growing community that is all-inclusive and allows anyone to come in without any prior experience, anyone who has the willingness and motivation to come and learn how to do software and development and design, and have all the resources available for them to go from not knowing anything to in a couple of weeks or a month being confident in their skill set.”

“We want to help people get to the next level, to help them get matched with startups, with tech companies, get internships, and even start their own companies,” added Chaieb. “That’s one thing we stress a lot in the hacking culture, that entrepreneurship is what it’s all about.”

Ohanian also took time to share stories of success he encountered in his journey across the continent, with one in particular outlining the hard work a young girl named Maya put into developing an eco-friendly clothing line. Her line eventually developed into a non-profit business and led to her giving her very own TedTalk at just fourteen years of age. Ohanian also cited successful Kickstarter campaigns and the popularity of the Humans of New York photography and story-sharing blog as examples of the extreme power of the internet age, and the opportunities present for a future generation of net users to make their mark.

“The shoulders of the giants that we stood on were pretty damn big, but the shoulders of the giants that you all get to stand on are even bigger,” he explained. “What Steve and I did over the last 8 years will pale in comparison to what you are all capable of doing over the next several. And that is great. I am jealous of you, but I’m really excited, because that’s progress, and that’s innovation.”

It’s innovation that Jaber and Chaieb have seen first-hand, with hacking projects like robots that can mimic human writing and answer simple math problems, and applications that allow users to create websites using only voice and gesture through an Xbox Kinect system. It’s a type of innovation that’s also been seen at the Dobson Centre, one of the collaborators of the event, with startups developed by students participating in the Dobson Cup ranging from biodegradable plastic ventures, microchips to assist in cancer research, and the move to publicize genome data to allow users to see their susceptibility to various diseases through a simple sample of their DNA.

For Ohanian, the primary message he hoped to leave students with was clear: take advantage of your resources and start right away. It’s a message he explained through the example of classic video games. “When you had a finite number of lives in your game before you reset, you would always play your hardest on your last life. And what I realized is that we are living with zero lives remaining. By virtue of the fact that you guys are even here, that we are having this discussion, puts us with a tremendous amount of privilege and, frankly, responsibility. So please take advantage of it,” Ohanian urged the crowd in his closing remarks. “Life is pass-fail after school. What really matters is that you make something or do something that people want. It took me 2 years of obsessing over my GPA and some waffles to get started.”

The summer before my first semester of college, I came home from work as a hardware store cashier one day…