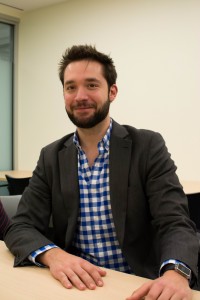 On March 11th, Reddit co-founder Alexis Ohanian came to McGill in an event coordinated and sponsored by HackMcGill, the Desautels Faculty of Management and the Dobson Centre for Entrepreneurial Studies, as part of his North American university tour to promote his new book, “Without Their Permission.” The Bull & Bear’s Ana Maljkovic had the pleasure of sitting down with Alexis to discuss everything from entrepreneurship to open internet to social change, and even managed to squeeze in some time to talk about his favourite subreddit. Here’s how it went.

Ana Maljkovic: Thank you for coming.

Alex Ohanian: Thank you for having me.

AM: Let’s start from the beginning. How did starting Reddit and your whole career path happen for you? Is that something you knew you’d be doing from a young age or did it just happen?

AO: I had a lot of positive influences on me, particularly as a kid. I had great parents – my dad was an entrepreneur who started his own travel agency. But I was really on the wrong path, I was going to be an immigration lawyer and I was obsessing over my GPA for my first two years at school. I took every LSAT prep class I could until finally I walked out and realized, you know what, I don’t actually want to do this, and law school is going to be very expensive. It’s much cheaper here in Canada, but still. I think there are definitely some people who are very suited to that [career path] and it works for them. I have a couple of friends now who are lawyers, who actually enjoy what they’re doing. They’re doing startup law and they’re just the right kind of person for it, but I’m not that kind of person.

AM: One of the big things about Reddit it its social power. In 2007, Redditors came out en masse to vote for Greenpeace’s whale naming competition, naming it Mr. Splashy Pants. Recently Reddit got some attention for its coverage of the Boston bombings, and the Syrian Civil War. What do you think it is about the platform that has made it into this vehicle?

AO: We tried to build the most robust platform we could for communities all over the world to share those links and have those discussions and vote up the best ones. There wasn’t a lot of premeditation. We just wanted to solve that problem for ourselves and hopefully it would benefit lots of people, and I think what you see there is just a reflection of the people using it. At the end of the day, it is a tool and it turns out people are, on the whole, pretty damn cool. So like any tool, it’s a reflection of the users. Now that we have, as I said in my speech, four Canadas worth of users – that’s a lot of users. And it’s interesting to see what they come up with.

AM: You’re a very strong proponent of keeping the Internet open, and it’s something you mentioned in your speech today. You’ve campaigned against SOPA and PIPA. What’s behind that for you?

AO: The reason I got involved in the fight is because I knew Steve [Huffman, Reddit’s co-founder] and I never could have started Reddit if those bills were law, so it was almost out of self-preservation. And the reason I continue to fight it is because, as I hope is evidenced from the book, the tour, the talks, there are so many people using this open platform to do amazing things, and I don’t want to miss that. Not only are you talking about the Mayas and the Lesters and the Brandons of the world [referring to young entrepreneurs mentioned in his speech] not being able to do what they’re doing now, but you’re also talking about generations of future ones who will never get the chance to do that. That’s an unimaginable cost that I won’t stand by losing.

AM: You seem to really merge technological innovation with social innovation. How do these two link together for you and why do you integrate them so much in your work?

AM: What advice would you give to young, aspiring entrepreneurs who are looking to follow the path that you’ve taken?

Alexis Ohanian: Are they in school right now?

AO: Okay. Take full advantage of this time in your life, because you are never going to be freer than you are right now. You’ve got your room and board covered, you’ve got people all around you who are just as young and ambitious and excited about doing stuff. Start doing stuff. Some of the best experience you’re going to get here is not actually from your classes, it’s going to be from stuff you’re doing on the side. So whether it’s launching your first Kickstarter campaign for the art project you want to do, or whether it’s starting a Shopify store to sell your gourmet coffee beans, whatever it is. Get started doing that stuff now, because even if you don’t want to start a company, that’s what’s going to make you someone I want to hire, as well as someone I want to invest in, because you’ve got the ability to have ideas and actually do them.

AM: You’ve mentioned in the past that you don’t consider factors like GPA or where people attended school when hiring. I know this is a trend that a lot of companies have started to follow. What’s the rationale behind that for you?

AO: This is something that’s not unique. I mean, it’s on the Y Combinator application – school is, but GPA isn’t. I think a lot of my peers in startups, a lot of my fellow CEOs, realize how moot those things really are. There might be certain jobs or certain responsibilities where, if you’re hiring a CFO for instance, it would be helpful to know that she has been studying finance for a while. But at an early stage company, especially when the job roles are more abstract and you have to do a lot of different things, if you’re a developer or a marketer, what really matters is the stuff that you’ve built, the stuff that you’ve done. If you’re a designer, I want to see your portfolio. If you’re a marketer, I want to see campaigns that you’ve run and managed. All of those are things that don’t show up in your GPA, that don’t show up in what school you went to. I might take note if it’s a rival of UVA, which is where I went to school, just so I can make fun of you and tease you. [laughs] The thing that matters is getting s–t done. In this economy, in the new internet economy, that’s what matters, because access to knowledge has never been this possible for whatever it is you want to learn. In a lot of ways, I don’t think schools – there aren’t any universities that are particularly well-suited to this world. They’re all trying very quickly to adapt, but in the meantime, just get s–t done. 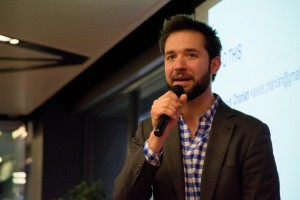 AM: I know you’re doing a university tour right now, going to different campuses across North America. From what you’ve seen, do you feel like there’s an entrepreneurial spirit for this generation to carry on?

AO: Absolutely. It’s almost out of necessity. The Canadian economy is obviously faring a lot better than the US economy during this great recession, but still, a lot of the traditional jobs that I think many of us were expecting to get after our schooling are not there and the only upside of that is that it’s forced us to invent our careers, instead of just following them. The other bonus of that is, you know, when you have so few traditional or conventional options, it really lets you think ‘What do I want to do?’ I think we’re the first generation that’s also gotten the chance to say, ‘What am I really passionate about and can I find a way to hack this into a career?’ And that’s where you see the rise of the freelancer. I think you’ve seen many more people who are being much more opportunistic with what they want to do with their lives, which I think is a tremendous opportunity. If you imagine new workforces of people who are actually doing the s–t that they’re excited about, that’s going to pay huge dividends a lot sooner, than a workforce that’s just doing the job they were supposed to do for forty years to one day do the things they actually want to do, when they don’t have the energy, they don’t have the ambition, they don’t have the freedom. So yeah, I think the entrepreneurial spirit is everywhere. I’m just trying to get people to realize that there aren’t just special people who are entrepreneurs, and then there’s everyone else. Everyone is capable of being entrepreneurial. Even if you don’t want to start a company, there are so many other ways to do it.

AM: On the subject of entrepreneurial spirit, is there any app, website, or company that’s starting up now that you’re really excited about and you feel is going to be the next big thing?

AO: Oh, I’ll tell you about the most recent one I’ve invested in, which is called ‘Secret.’ You have to download it and you’ll see, from your friend network – basically your contacts on your phone – you’ll see all these anonymous secrets. [reading off phone screen] Things like ‘I smoked and watched Cosmos’ – from a friend of a friend. What it does is, in an age of social media where everyone is trying to posture and choose the best filter for their experience, this is giving us a look into what our friends, the people we care about, and even a few strangers honestly think. I think it’s part of a bigger trend – Snapchat’s part of it for sure – that’s almost a response to a world where Facebook and Google are trying to give us as real of an idea as possible, when in fact I think people have always craved the ability to be honest and have candor in their lives, which is hopefully what Secret’s been doing. Their traffic’s been crazy, so we’ll see where it goes. It’s only on iOS for now, but Android’s coming soon.

AM: You’ve done reddit, hipmunk, fundraising, financing, all these different things… what’s next for you?

AO: Wow… I don’t know. I think I’ll be spending a lot of time back in Brooklyn, working on a very cool project in physical space, that I hope embodies all of the things that I’ve talked about, seen, and encountered, not just over the last eight years, but especially over this tour, that hopefully pushes forward even more these ideas I’m talking about, things like entrepreneurship.

[The Bull & Bear’s Layout Editor, Sisi Ye, who was present at the interview, jokingly whispers “r/trees.”]

AO: [laughs] Alright, let’s put r/trees on there. On that note, one of my favourite AMAs was actually Snoop Lion’s.

AM: Alright, wonderful. That’s pretty much it. Thank you so much for the interview and best of luck with everything.

Click here to read the article on Ohanian’s visit

In 1776, John Adams — a Founding Father and future President — wrote that the fight for American independence was…