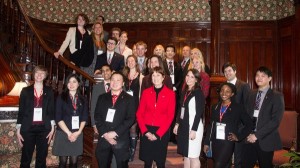 On Thursday, the Faculty Club housed the annual pinning ceremony for the recipients of the prestigious Scarlet Key. This year’s honorees included students from all faculties as well as alumni who have demonstrated an exceptional ability to integrate student leadership into their academic experience. Each recipient was recognized for their excellence in student leadership and was officially invited to join the esteemed alumni of past Key winners.

For the last 85 years, the Scarlet Key has promoted the concept that if “academics are the heart of the student experience, then extra-curriculars are the soul.” The selection process involved an application highlighting individual achievements. Then, the executive committee convened and decided which students would be bestowed the honour.

The ceremony began with a brief networking cocktail amongst alumni, recipients, and invited guests, which gave everyone the opportunity to discuss past and present accomplishments.

The welcoming remarks were given by Scarlet Key President Ryan Tomicic, SK ’09. He addressed the guests by reflecting on his experiences at McGill and what distinguished the Scarlet Key from other awards. He stated, “the Society seeks to bring student leaders closer together and to provide them with the means to continue their service to McGill and the community.”

Afterwards, Scarlet Key Vice President Carter Li, SK ’11, presented the recipients with their pins with the help of Principal Heather Monroe-Blum. All 24 were acknowledged for their individual work and the spirit they brought to the community during their time at McGill. Those pinned included students active in journalism including Dan Novick, Executive Editor of The Bull & Bear, Elisa Muyl, Editor-in-Chief of the McGill Tribune, Jennifer Kern, President of TVM, Trip Yang, creator of McGill State of Mind, as well as many others whose achievements are exemplar.

This year, along with the 24 honored, an honourary Scarlet Key was awarded to Heather Monroe-Blum by Richard Pound, BCom ’62, BCL, ’67, LLD ’09.

Monroe-Blum exclaimed the honour she felt receiving the pin and said that she “finds [herself] amongst such a distinguished group.” As she concludes her final semester as Principal and Vice-Chancellor, she remarked on this being a wonderful way to bring her tenure to a close.

The ceremony concluded with final remarks by Tomicic. He thanked all the guests for their effort in making the soiree a success. He left those in attendance with the message, “receiving the award is not an end itself.”

Akshay served as Executive Administrator, Vice President of External Affairs, and President of the SUS. As President, he oversaw the hosting of the inaugural McGill Science Olympiad and spearheaded the creation of the McGill Science 21st Century Scholarship and Ambassador funds.

Mohsen served as MUS VP External from 2009-2010, where she strengthened relationships with other universities and was a key player for McGill at most inter-university competitions. She was recognized for her contribution by winning the RÉFAEC Leadership Award, the MUS President’s Cup Award and earning a nomination for the Canadian Association of Business School’s Leadership Award.

Dan Novick transitioned The Bull & Bear, McGill’s student newsmagazine, from a primarily Management-based newspaper to a campus-wide magazine during his year and a half and counting with the publication. Under Novick’s leadership as Executive Editor, in a period of just three months, online readership doubled and the magazine was saved from being defunded by the MUS through the procurement of advertising revenue.“Being a part of The Bull & Bear‘s exponential growth in my year and a half with the publication has been one of the most challenging yet rewarding experiences of my life,” said Novick. “The campus-wide transition wouldn’t have been possible without people like David Lin, JD Moirez, and Jessica Simmonds. So, I accept this award on behalf of them as well.”

Elisa’s biggest contribution to this community has been her four years of dedication, exceptional leadership, and vision at the McGill Tribune. As Editor-in-Chief, Elisa has transformed the way in which the Tribune operates fundamentally in terms of its long-term direction, administrative operation, content, and public relations. “I think it’s important to recognize extracurricular achievements at a large and impersonal school at McGill, and particularly those that seek to foster community and engagement on campus,” said Muyl. “I’m pretty honored to have been considered and to be ranked alongside some truly impressive people.”

Elizabeth was instrumental in the founding of the PGSA, a council dedicated to fostering a community for graduate students spread across numerous research institutes. While serving as the president of the PGSA, Elizabeth engaged her peers through numerous initiatives, including the development a student run newsletter, social events, mentoring opportunities and peer support.

In her three years at McGill, Finola has been instrumental to the growth of both the Bachelor of Arts & Science Integrative Council (BASiC) and the Montreal Heart of the City Piano Program (HCPP). As the co-chair of BASiC’s Freshman Arts & Science Committee in 2011-2012, Finola initiated a BASiC buddies program, which paired up freshmen with upper-year Arts & Science Students.

Under Gabrielle’s tenure as VP External and President of the Canadian Studies Association of Undergraduate Students, she was a founding member and editor of the interdisciplinary journal Canadian Content. As Vice President of the Redpath Museum Club, she redesigned the schedule system for tour guides and helped found, develop and edit the first RMC journal, Behind the Roddick Gates. Gabrielle also served as Valedictorian of her graduating class of 2012.

As President of the Law Students’ Association, Graham introduced governance reforms to increase transparency. These included a process to incorporate members’ input in the budgeting process, as well as a redesign of the office of Chief Returning Officer and the election and referendum campaign process.

Jason Gencher – Bachelor of Music May 2013

Jason worked as a Band Manager and Librarian for four years straight with three McGill Jazz Ensembles and wrote periodic columns for the McGill Office for Science and Society’s website. Jason participated in various clubs such as Pearson House, the Freethought Association, the Ski Club, the P.G Wodehouse Appreciation Society, and Medical Direction’s MedCasts.

Jason Karmody – Bachelor of Arts May 2013

As VP Events for the Arts Undergraduate Society, Jason created The DepARTmental Cup as well as De-Stress AUS. As President for the Student Organization for Alumni Relations (SOAR), Jason has been involved over the past five years in promoting alumni-student connections. As Vice-President External, he organized the Trading Places admin-student role swap with the Dean of Arts and McGill’s Chief Innovations Officer.

Jennifer Kern – Bachelor of Arts May 2013

Jennifer captained the McGill Women’s Tennis Team to Regional Finalists in 2011, Regional Champions in 2012, and National Competitors in August 2013. As President of TVM: Student Television at McGill, Jennifer has been instrumental in enhancing student production at McGill by developing a student media production fund, campus media collective, and media production training.

Throughout Josh’s four years at McGill, he worked with residence councils, organized MUS and SUS events, and devoted his time to a myriad of campus initiatives. He served as President of McGill Students for Right To Play from 2010-12, restructuring the club, pioneering new events and programs, and expanding its scope to reach all corners of the McGill community.

Kady’s commitment as President of the Education Undergraduate Society has seen involvement in EdUS and Faculty events skyrocket over the last year through running the EdUS’ first independent and fiscally stable Orientation Week, creating a new mentorship program for first-year students, reforming the EdUS Constitution,, and creating many new EdUS committees to ensure the continued expansion and growth of the EdUS.

In the past two years as President of the Macdonald Campus Students’ Society, Kerry has lead, overseen, and coordinated student relations with both Administration and Student Council. Kerry is also on the Founder’s Day Committee, Faculty Planning Committee, Principal’s Awards Committee, Library Committee, Sustainability Projects Fund Committee, Macdonald Food and Dining Services Committee as well as the Campus Community Committee that work with alumni and organize special events.

As a varsity athlete, team captain and manager of the McGill Rowing Team, Lorna planned, organized and executed fundraising efforts, team travel and logistics, enabling the team to represent McGill and medal both nationally and internationally. She added new events to SSMU’s Student’s Society Network Program (SSPN), coordinated SSMU Frosh, and sat on the SSMU Council as a Clubs and Services representative.

Mike has created, designed and given numerous classes and workshops to MBAs, undergraduate and graduate students from all faculties and to the wider McGill community. These lectures have provided directly applicable skill-building tools and included two classes that now form an integral part of the official MBA and part-time MBA programs. Mike also founded the MBA Squash Club, the biggest club in the program, bringing all members of the community together in a healthy and fun environment.

Nicole Millward – Bachelor of Science May 2013

As a founding executive and two-year president of MEDLIFE McGill, Nicole Millward lifted her club out of obscurity to become one of the most important charity organizations on campus. During her tenure, MEDLIFE McGill grew from a small group of friends to a campus-wide organization that involves hundreds of students and facilitates the provision of aid to thousands of low-income Latin Americans every year.

Over the past two years, Sandra has served as the Class President for first year students and now second year students. She was on the 2012 Orientation Executive Committee and oversaw big faculty traditional events including the Dean’s Welcome Ball. Sandra also advocates on behalf of her peers on various faculty advisory boards and established the Journal of Dispute Resolution and the Mediation at McGill Club.

Sebastien served as President of the McGill Graduate Association of Physics Students (MGAPS) during the academic years 2010-11 and 2011-12. He also collaborated in some of the activities of the Centre de Recherche en Astrophysique du Québec, through his participation in the scientific council of the research centre, and by organizing a student workshop in 2009. In 2011, his leadership and academic excellence were rewarded by the Vanier Canada Graduate Scholarship.

Simon Zhu – Bachelor of Engineering May 2013

Trip led the video production of “McGill State of Mind,” which featured sophisticated teamwork between 300 participants, 40 student groups and 8 McGill offices. It made breakthroughs in its campus wide scale and is the most viewed student production on YouTube. Trip also served as the first President of Computer Taskforce to introduce recyclable printing paper as part of the group’s inaugural sustainability initiative.

In addition to being a member of McGill’s Novice Rowing team in her first year, being elected as Blood Drive Coordinator for the Science Undergraduate Society and being a volunteer for McGill’s First-Year Office, Victoria has worked tirelessly as Co-President of the Student Association of Cognitive Science to unify the students in this department and to promote Cognitive Science within the McGill community.

Literary publications at McGill and the greater Montreal area are a vital part of our creative community. They allow writers…