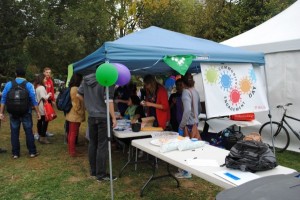 On Friday, students, faculty, and staff took time away from their work to volunteer and learn more about the communities of Montreal as a part of the second annual Community Engagement Day (CED). Run by McGill’s Office of Social Equity and Diversity (SEDE), over 550 students registered for 43 projects designed to connect McGill to partner community organizations.

SEDE is an office within McGill that looks to create an understanding between the student body and the McGill community, as well as the city of Montreal. Community Engagement Day was started as a part of the office’s Community Engagement Toolkit, which connects students to service opportunities throughout Montreal.“All the projects encompass engagement in the broadest sense of the term, whether it is through actual physical volunteer work, going to a workshop or going on a tour,” explained student coordinator Emily Boytinck. “It is all about learning in different ways.”

The purpose of the day was to establish a reciprocal relationship between McGill students and community organizations, as well as to expose students to the city outside of the ‘McGill bubble.’ “Oftentimes Community Engagement Day takes students to neighbourhoods they have never been to before or leads people to interact with groups they’ve never interacted with before,” Boytinck enthused. “It expands perspectives and allows for future involvement in volunteer work.”

Although a majority of the projects occurred on Friday, the event began on Thursday and will have activities occurring until Wednesday.  Organizers believe that having events on Saturday and Sunday allowed for the engagement of staff, faculty, and students who would otherwise not have time to volunteer on weekdays.

Friday’s activities began in the early morning and extended throughout the day. Since Community Engagement Day last year, SEDE doubled the amount of partner organizations for the day, expanding the activities that students could participate in. The number of registrations also doubled from last year, demonstrating the success of SEDE’s marketing initiatives leading up to the event. “We wanted the focus to be on the community organizations that we work with because they are the real stars of community engagement day” noted Boytinck.

The marketing initiatives were spearheaded by the SEDE office under student Communications Coordinator Dan Moczula. The office promoted the event through videos, photography, and news articles, as well as through the utilization of creative graphics and social media.

One of the notable new partnerships that SEDE established this year was with the Quartier de l’Innovation, a project started in 2009 by McGill and Ecole de Technologie Superieure (ETS) to encourage innovation both within Montreal throughout Canada.  As part of the partnership, students participated in the restoration of the Griffintown Horse Palace, the oldest urban horse stable in Montreal, and in the two-stage clean-up of Batiment 7, a decommissioned CN property in the neighbourhood of Point St. Charles. Students also promoted political advocacy for the upcoming municipal elections by handing out flyers in the neighbourhood of St. Henri.

In a tent set up on campus’ lower field, guest speakers and organization representatives led discussions throughout the day on the topics of applied student research, gentrification, and youth engagement. Attending the discussions were students interested in starting their own initiatives or just in learning more about the cause.

In the discussion on youth engagement, led by the Head and the Hands and the Quebec Public Interest Research Group (QPIRG), participants learned about responsible engagement and volunteering. “I always tell volunteers to embrace discomfort,” a QPIRG director related. “Discomfort is really the central part of engagement.”

A key change this year in the organization of the event was the role of student leaders. While last year, students signed up towards the end of the process to lead pre-established activities, this year student leaders and groups developed their own projects, encouraging higher participation. “This makes the students more involved with the project and as the years go on this will be a big goal. This way we will get more people involved from the beginning and throughout the development of the day,” said CED coordinator Anurag Dhir.

Many McGill-affiliated clubs and organizations such as the SUS, the AUS, and SSMU were at the event leading projects. Aside from students and professors, Principle Suzanne Frontier, and the Deputy Provost Ollivier Dyens also participated in various projects throughout the day.

Organizers believe that the success of the day will improve student participation in volunteerism, as well as engagement with community organizations. SEDE is working with participating organizations to set up a smooth transition for future volunteer opportunities. “We want to show the McGill community that it isn’t too difficult to get involved in Montreal, and that there are some really great community organizations,” Dhir noted. We are trying to break down the barriers as much as possible.”

To continue the engagement of the McGill community, SEDE has a follow-up plan for the day’s events to continue to connect students to partner organizations throughout montreal. SEDE has already contacted many organizations that participated in CED to arrange volunteer opportunities for students. Organizers of SEDE encourage students to use the Community Action Kit provided through their office as a launching point into service in Montreal.

For more information or to sign up for this week’s activities, check out http://ced.conference.mcgill.ca

I have a major declaration, and that is that I have no idea what — or how — to declare…