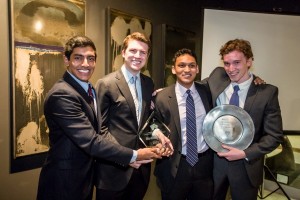 Twelve teams from around the world were welcomed to McGill as the 13th edition of the McGill Management International Case Competition (MMICC) took place between March 18th and 23rd. McGill hosted the teams from eleven universities across eight countries as the week-long event treated participants to various social and networking events and tested them academically with a 32 hour case crack.

“We are the world’s friendliest case competition,” explained co-Chair Shonezi Noor. “There are so many things about it that make it just unbelievable, from being an ambassador for our school to welcoming people from all four corners of the world.”

MMICC involved three days of social activities and three days of competition planned by the executive committee of 12 Desautels BCom students, as well as two advisors who were the co-chairs from last year’s MMICC. The participating universities in this year’s competition were HEC Montreal, Wharton School of Business, UC Berkeley, UBC, University of Porto, University of Belgrade, Norwegian BI Business School, Thammasat University, Universitas Indonesia, the University of Melbourne, alongside the hosts McGill University.

This year’s MMICC involved two notable changes from previous years that were implemented. First, the case crack period was lengthened from 24 hours to 32 hours. ”You’re running on no sleep at all, so this [change] gave them the night to get some sleep and recover,” said co-Chair Katan Patel.

In addition, the Executive Committee introduced a new ‘international team’ composed of four students from four different universities who had never met before. Judging the performance of their presentations, Noor finds, “You wouldn’t be able to tell that they just met.”

The social aspect of MMICC is what sets it apart from other case competitions and keeps teams from around the world coming back year after year. “You get so much more out of the experience when you go beyond the competition element and get to see the city and have fun with the other participants,” finds VP External Sarah Corkery. The week-long event kicked off with two nights of dinners and cocktails, as participants, ambassadors, and committee members gathered, mingled, and even learned new languages and customs from around the world.

A massive snowstorm hit Montreal on day three of the competition, the day that the scavenger hunt was planned, blanketing the city with an estimated 20 centimetres of wet snow. This was in stark contrast to exactly one year prior, when teams were in shorts and t-shirts on lower field. Instead, this year they engaged in a snowball fight.

The next day’s snowtubing at Mont Avila was the highlight of the week for many participants. Some teams, such as Thammasat and Indonesia, had never seen snow before. “They had a hard time even wrapping their heads around the concept of sliding down a snowy hill on a giant rubber tube,” explains Corkery. “Their faces as they flew down the hill were priceless.”

As the three days of social events came to a close, the participants began to focus on preparing themselves for the case crack period, which would test them mentally, physically and emotionally.

This year’s case, The Greenlite Lighting Corporation Case Study, was developed by the Desautels Program for International Competitiveness. Greenlite, a leading North American distributor of energy-efficient lighting products, is being pressured by its Asian suppliers to accept higher purchasing prices as a result of increasing input costs. In light of recent attempts by Chinese manufacturers of CFLs LED bulbs to sell directly to the US, participants were charged with the task of developing strategies to innovate and diversify the company’s product line and to manage its supply base, all while building the Greenlite brand.

After a grueling 32 hour period to perfect their solutions to the case, the 10 judges deliberated for hours to determine the placings. The results were announced at Galerie MX in the Old Port following dinner and drinks. In the end, the team from the Wharton School of the University of Pennsylvania, composed of Jack Robinson, Alex Wolkomir, Vikram Iyer, and Ashish Patra, captured first place in MMICC 2013.

Patra spoke to The Bull & Bear about how his team was able to pull off a victory. “I knew we were going up against some of the most talented kids around the world and that the competition would be really tough,” he finds. “The guys are some of the smartest and most hardworking people I know, but more importantly, our skills and personalities meshed together to create an awesome team.”

The University of Belgrade placed second, and the International team and Thammasat University tied for third place.

MMICC began in 2000 when Desautels professors Richard Donovan, Wallace Crowston (former Dean of the Faculty of Management), Gerald Ross, and Alistair Duff (former Associate Dean) decided that, instead of just competing in international case competitions, the Faculty of Management would finally host a competition of its own. The format borrows from the model first used at the University of Southern California, but sets itself apart from other case competitions by focusing on innovation, globalization, and cross-functional disciplines.

The Executive Committee of 10 students was recruited in September and has been carefully planning MMICC for the past six months. “This is really their success and we couldn’t be prouder of them,” notes Patel.

“We are the world’s friendliest case competition not just because of our committee making this an experience for the participants but because of everyone who is involved,” Noor emphasizes. “I’m proud to say that I’ve been involved with something like this. It’s definitely made my McGill experience.”

On November 18, U3 Linguistics and Political Science student Charlie Baranski took to Facebook to describe a negative experience he…