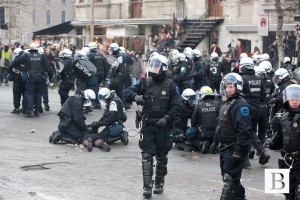 A demonstration that started at Victoria Square at 2pm on Tuesday attracted thousands of people to protest the proposed indexation of tuition fees by the Parti Québécois. The demonstration was planned by L’Association pour une Solidarité Syndicale Étudiante (ASSÉ), the student group centrally involved in the student protests of 2012.

The protest moved north towards Sherbrooke, heading east towards St. Laurent. The protesters then headed north on St. Laurent towards Pine before heading south on Berri to rue Ontario. The demonstration took an aggressive turn at St. Denis and Ontario as riot police rushed the snowball-tossing and chanting protesters.

The fee increases that spurred last year’s protests and student strikes were cancelled by the Parti Québécois following their victory in the September 2012 election. Since then, Premier Pauline Marois has drawn sharp criticism for mandating $124 million in cuts to the budgets of Quebec universities and for announcing the indexation of student tuition to the rate of inflation.

This Monday marked the first day of the PQ’s Summit on Higher Education, promised during the campaign to discuss the issues affecting post-secondary education in the province. University administrators, student groups and unions were invited to take part in the conference that ended on Tuesday afternoon.

ASSÉ announced their intention to boycott the summit in response to Minister of Higher Education Pierre Duchesne’s rejection of free university education in the province, and instead planned this afternoon’s demonstration.

Many protesting students considered the PQ’s stance a betrayal of their election promises and previous support for the ‘Maple Spring.’

“I’m disappointed but not surprised,” said one protesting Concordia student. “They co-opted a movement to get into power and now that they’re the governing party they don’t need to listen anymore.” When asked about the Summit on Higher Education, she charged that “it is just their way of making it look like they’re listening to people.”

Reactions to the protest were mixed. “I think it’s a good idea to make university as accessible as possible,” but if the universities are already underfunded I suppose it can be hard to do,” said one bystander. When asked if the province could afford to cover the costs of university education, one protester answered, “tuition increases aren’t inevitable; we always have a choice on what areas we want to spend money on and what we value.”

At around 4:30pm, riot police physically charged protesters at the area around rue St. Denis and rue Ontario by rushing towards them at full speed in an attempt to disperse them. The protest died off at around 5pm as protesters dissipated while two police helicopters circled overhead.

ASSÉ spokesman Jérémie Bédard-Wien reiterated to CBC News that the group is opposed to the PQ’s decision to index tuition to the cost of living. “Students will be there to remind the government that they didn’t take part in six months of strikes to get an increase in tuition,” he said.

According to the SPVM, a total of 13 people were arrested, including four charges of aggravated assault for throwing things such as rocks, ice and snowballs at police officers, four charges of illegal gathering, and two misdemeanors.