A conversation between two strangers can often transpire into friendship if there is an established connection but can quickly turn into a row if there isn’t. Kaho Koda’s independent theatre project, University of Laughter, explores the boundaries and conflict between artistic expression and censorship amongst two men with, of course, lots of laughter.

Set in pre-war Japan in 1940, we are introduced immediately to a stern government bureaucrat named Mr. Sakisaka (played by Steven Finley), who has been recently promoted to the position of government cultural censor. We find him in the midst of a meeting with an eager young playwright named Mr. Tsubaki (played by Oskar Flemer), who has come to his office to await approval for his newly written script. The austere Sakisaka, who asserts that he has never genuinely laughed in his entire life, quickly proclaims that he does not see any comedic elements to Tsubaki’s work, leading to several days of quarrel between the two after Sakisaka demands corrections to be made. Generally, when Westerners think of two people quarrelling about artistic differences, the perceived notion it will turn into a very emotional saga with jabs and personal attacks. In the East, and especially Japan, there is a sense of respect between the roles and hierarchy of people in society. In University of Laughter, Sakisaka is of clear authority over Tsubaki and we see this play out in an amusing way, as Tsubaki must remain respectful without sacrificing his ultimate artistic flair and pursuit. This translation on to the stage ultimately provides a unique point of comedy for the play that audiences may not expect. The cultural difference also ties into the language factor, as it is the director Kaho Koda’s English adaptation of the original play by Koki Mitani, a Japanese playwright who is famous for his comedies and parodies. 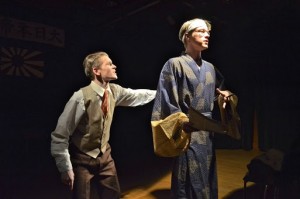 “The puns were very very difficult [to translate] and words are so different in English and Japanese… There were add-ons to the words but I think it worked because people were laughing!”, Kaho says when asked about how she dealt with translating the jokes in the play.

Although the play is set in Japan, both the actors in this play are white. University of Laughter is presented in a Japanese setting but the actor’s do not try to come off as exuding Japanese traits besides in their dress and the set. “The questions I have kept asking myself are the following: how do I present Japanese customs and concepts to the Western audience? Would I be casting Asian actors? Would I be choosing race over talent? Or vice versa?… More than the race, I want to portray Japanese customs and ideas through these two talented actors.”, Kaho says in her director’s note. The play moreso focuses on the comedic elements, which really seem to preserve the essence of the original play but it is always important to be aware of race in situations as such, which Kaho has done. She further says, “ As I was doing a lot of research on Koki Mitani, the playwright of this play, he talked about how he wanted to export his plays and show that the Japanese are also adept at making comedies…There is an English script out there but I wanted to capture this Japanese setting to show that the Japanese are adept to making comedies.”

Even though the final scene of University of Laughter is a serious and rather sentimental one, audiences cannot help but giggle at the creative dialogue and the ultimate fate of Tsubaki’s play with superb performances from Oskar and Steven. University of Laughter delivers a vivid story with well-timed humour that will leave you wanting more. 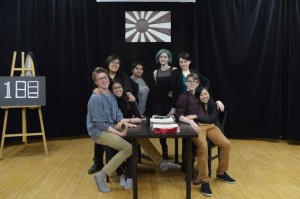 Many thanks to Emily Kyte for her photography