Low prices and overproduction have become synonymous with the oil industry. Over the past year and a half, the price of oil has decreased by almost 55% (see figure 1). Although this is good news for consumers, record low oil prices are having a more complex effect on the global economy. Last year, 81 oil and oilfield services companies filed for bankruptcy; a majority of oil companies cannot keep up with their costs of production. As uncertainty still exists in the market, the number of Credit Default Swaps and Commodity Swaps in oil and gas industry are both at  high levels. Future prospects of volatility are still affecting the global economy and exchange rates. 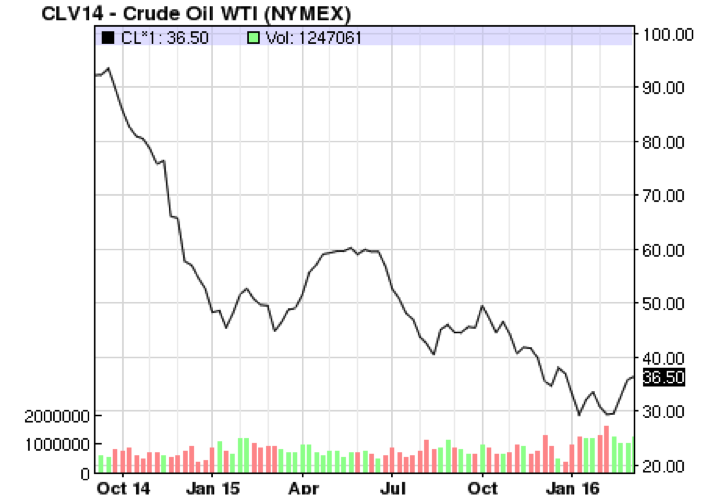 The question is: how long can this low price and high production trend continue? Today, there are numerous variables that are likely to cause unexpected changes in the oil market, such as China’s new stimulus package, the end of sanctions on Iran, and Russia’s tentative agreement with other oil rich countries. Each of these factors seems to be excessively complicated, limiting the scope of any  forecasting. Even specialists in oil commodities have differing opinions about this seemingly harmless question.

Some experts are predicting that the oil prices will rebound. There are a couple of reasons for this. Firstly, a newly adopted stimulus package injected into the Chinese economy this year would raise demand for oil and hence would raise its price. This stimulus package is targeting especially the Chinese secondary industry (manufacturing and construction industries), which constitutes nearly half the country’s economy. Given the industry’s dependency on oil and its large size there are strong reasons to believe that there may be an upward pressure on the price of oil. Secondly, the Chinese economy’s slowdown has not reduced China’s oil consumption, which went up eight per cent in 2015, the second-highest annual increase since 2010.

On the supply side, Russia, who has been heavily wounded by the low oil prices, recently presented a tentative oil freezing agreement to curb output to three quarters of the current global oil production, in order to stabilize the oil price between 50 to 60 dollars per barrel. Despite the lack of support for such an agreement from Iran, a key OPEC member, Alexander Novak, the Russian energy minister, claims such an effort to boost oil prices could still be feasible without Iran’s cooperation.

On the other hand, those who believe that oil prices will take a further dip also have good enough reasons to do so. They argue that the decrease in prices will continue until next year, as the largest oil-producing countries are still reluctant and hesitant to decrease production levels. For example, Iran, after being lifted free of sanctions in mid- January, has expressed plans to increase domestic oil production in order to attract Chinese consumers and to compete against Saudi Arabia in the oil market. Amir Hossein Zamaninia, the Deputy Oil Minister of Iran, said that he has no doubt that Iran can attract at least $40 billion to $45 billion per year in oil investments. These factors have allowed the oil prices to rebound for a short period of time towards the end of January (see figure 2). 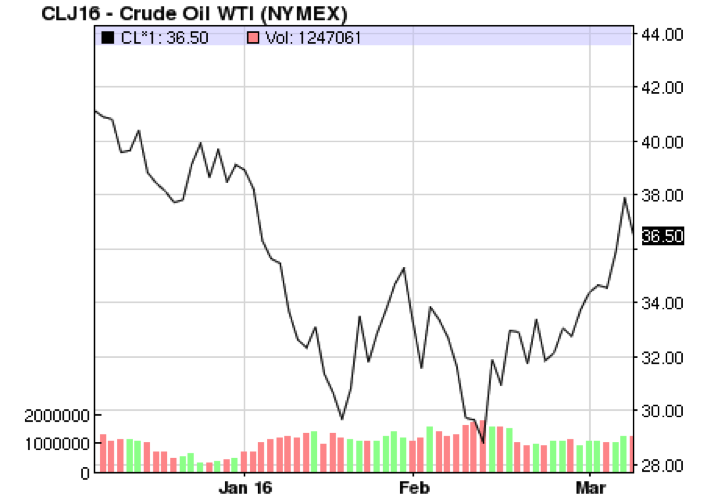 Furthermore, the CDS (credit default swaps) in oil and gas industry nowadays still persist – a credit default swap is a form of insurance for a money lender to insure him/herself against the possibility of a borrower to default on its loans. The investors who buy these credit default swaps will obtain security’s premium as well as interest payments from the defaults of oil companies. The increasing demand for CDS in the oil and gas industry imply that investors’ expect are quite pessimistic about the future the firms belonging to that industry. This also means that there is less demand for oil-related financial securities. These behaviours witnessed in the financial markets conveys a pessimistic prospect for the oil industry in the near future.

Despite Russia’s oil freezing agreement with a significant number of oil-rich countries, production limitations could be fatal for Iran’s fragile economy. So far, Iran seems certain not to support such an agreement. Nonetheless, the agreement’s tentative state allows the participating countries maintain their current levels of production- the risk of the agreement falling through appears to be a possibility. Additional price increases are still plausible since Iran has not yet earnestly jumped into the oil market; more time is required for their producers to prepare for large scale production. However, as one of the top oil producing countries, when Iran finally joins the market competition the oil industry will be more intensive: the market is likely to see higher production and, as a result, lower prices. Russia’s proposal to freeze production to OPEC members is still in a tentative state and Iran is unlikely to participate in it. These factors could be latent time bombs in the oil market. For now, it seems like the prices of oil will increase but potential volatility in the future may not be ignored.